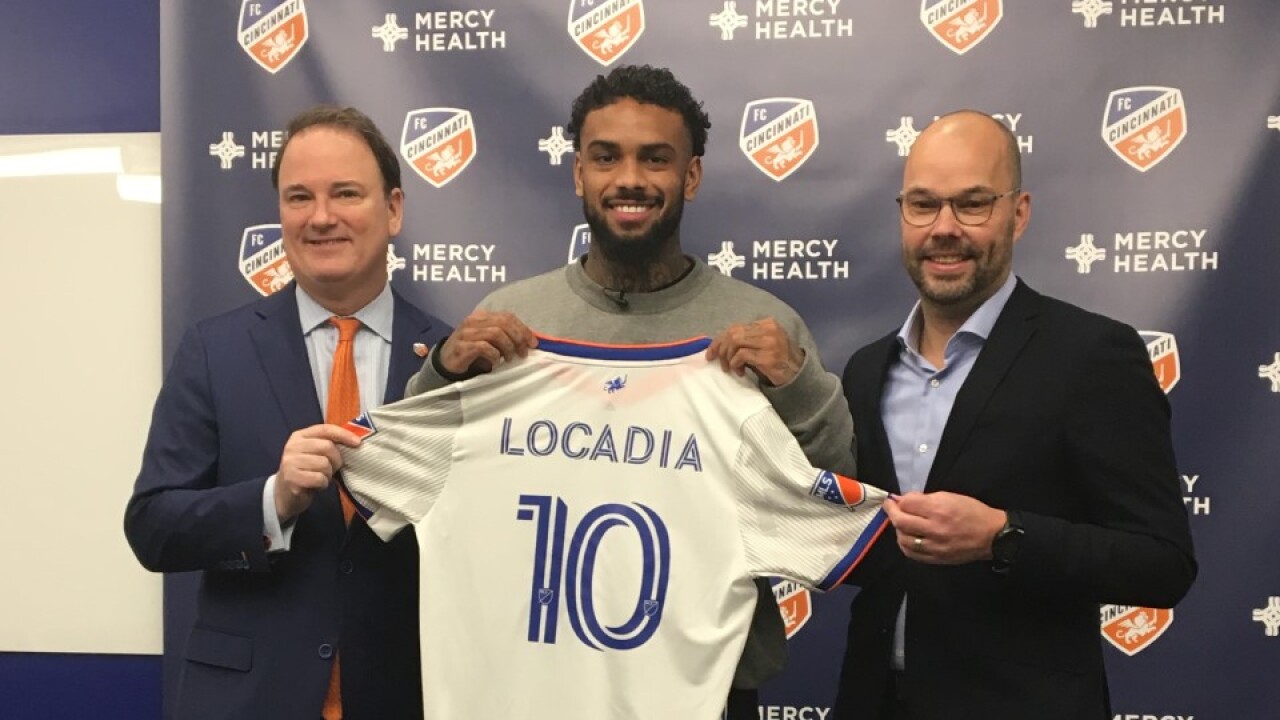 CINCINNATI — Jurgen Locadia found himself slipping into a bit of depression about three years ago while nursing a groin injury he sustained playing for PSV Eindhoven in the Netherlands.

A friend was producing music and needed some help, so Locadia offered to take it over just as a way to pass the time until he was able to play soccer again. Music became his creative outlet and has helped him through some tough times professionally, even since his groin healed.

Now, Locadia, a Dutch native, is hoping soccer can once again be the main source of his joy. He’s preparing for a new season, a new chapter in his career as he joins FC Cincinnati – his fourth club since he left PSV in January 2018 on a $20 million transfer fee to Premier League side Brighton & Hove Albion.

FC Cincinnati snagged the new designated player while he was sitting the bench on loan with Bundesliga side Hoffenheim, closing the deal Friday and officially signing him to the roster Monday.

“Throughout my time in Germany and Europe, I had ups and downs,” Locadia said during an introductory press conference Tuesday at Mercy Health Training Center in Milford. “I'm ready to play a lot of games and be stable in my career. I think Cincinnati gives me this opportunity.”

Locadia, a center forward who also can play left wing, is waiting on his work visa before joining the team for the preseason. FC Cincinnati plays USL side El Paso Locomotive FC on Wednesday in Tucson, then returns briefly to Cincinnati before finishing the preseason in Florida at IMG Academy.

He becomes the eighth player in MLS valued over $10 million on transfermarkt.com, and he fills a great need for FC Cincinnati, which recently waived DP striker Fanendo Adi and was lacking a proven scorer. The club signed left winger Yuya Kubo to a DP contract in December and announced another attacking piece Wednesday in French-born Moroccan international Adrien Regattin, who was completing a physical Tuesday at MHTC before signing.

However, general manager Gerard Nijkamp is hoping Locadia can be the impact player that was missing in the final third of last season when FC Cincinnati scored just 31 goals. Locadia tallied 45 goals in seven seasons with PSV, where he began his career in 2011, including a career-high 17 goals across all competition in 2013-14.

“I think Jurgen is a proven player in top leagues in Europe,” Nijkamp said. “In all his league, he scored goals, so he proved his quality and what is needed. ... We need impact players for our roster and especially up front, who can decide matches in the final third. I hope, but also think, Jurgen can help us with that final piece to create for the season 2020 and make the team better. Also, we know individual players have to make a team, and the team is very important to that individual player’s shine. I don't want to put too much pressure on Jurgen, but I am convinced he will be an added value for our roster.”

Locadia is ready to score goals, but more importantly, he’s just looking forward to consistent playing time so he can contribute.

He comes with the same expectation he had when he joined Brighton on that lofty transfer fee, before his career seemed to fall off track. There, he got off to a strong start, scoring in his debut in a 3-1 FA Cup victory on Feb. 17, 2018; a week later he scored in his Premier League debut. He netted three goals in 34 league appearances with Brighton before getting loaned out two games into the 2019-20 EPL season, as Brighton began play under new manager Graham Potter.

Locadia had a similar experience in Germany. He scored four goals in 12 appearances for Hoffenheim but had played just eight minutes in two games following the winter break.

“I expected more playing time, of course, and in the games I played, I showed my quality and scored some goals,” Locadia told WCPO. “Right after I scored some goals, I went on the bench again. That's when I called my agent, like, 'What's the deal here?' I didn't expect it. It's good to be here with a chance to play a lot of games. I'm not saying it's going to be easy. I need to show my quality every game, every practice, but I know my quality. I know I can do it.”

Self-described as a dynamic player who brings a lot of power up front, Locadia said he felt “stuck” with Hoffenheim because he already had played two matches with Brighton, and the FIFA three-club rule prevents anyone from getting minutes with more than two clubs in one year. FC Cincinnati provided a unique loophole for him because the club will be starting a new MLS season.

Nijkamp felt fortunate to be able to get a player like Locadia, someone he had followed for some time, particularly in his previous tenure as sporting director at PEC Zwolle. The club introduced the player Tuesday as “the biggest signing in club history,” but Locadia said he doesn’t feel pressure hearing that.

“I had the same thing when I came to Brighton,” Locadia said. “I don't decide what they pay for me. I am here to play the game and score goals and whenever the team needs me to be there, I will be there. If you ask if I feel pressure, no I don't feel pressure.”

Locadia hopes to make an immediate impact this season, but while he’s hopefully scoring goals, he will also still have his music.

“I think the last two years I've become more serious (about music), releasing some songs on Spotify and iTunes and stuff, making a video clip in L.A. last year,” Locadia said. “It's a fun thing to do besides football, to keep your mind fresh. It's a nice thing to do.”