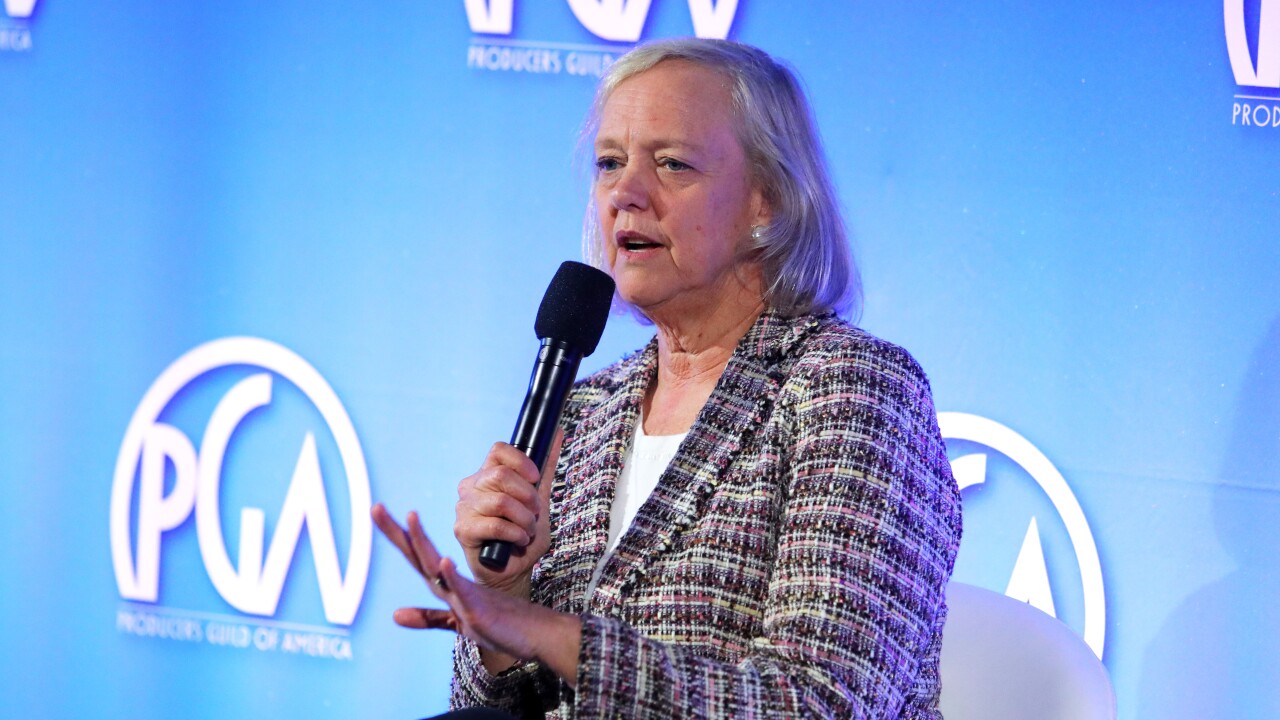 CINCINNATI — Meg Whitman takes pride in being a “trailblazer” for women throughout her professional career, and now she looks to bring that mentality to Major League Soccer.

FC Cincinnati’s quick rise and ambitious goals drew Whitman’s attention over the last year, and she, along with neurosurgeon husband Griffith Harsh, recently signed on as minority owners.

Whitman, the CEO of mobile streaming company Quibi, invested $100 million into the soccer club for a 20% stake, according to Bloomberg. She will serve as the club’s alternate representative among a male-dominated MLS Board of Governors.

The board approved the addition of Whitman and Harsh to Cincinnati’s ownership group Nov. 27, and Whitman was formally introduced in Cincinnati during a press conference Monday.

“When I went to undergraduate school (at Princeton), I was just the fourth class of women to go to an institution that had been all male for 250 years,” Whitman said. “When I went to Harvard Business School, I think just 20 or 30% of my class was women. So, I've always been on the forefront, and particularly now I think it's incumbent on us in these leadership positions to try to help and mentor young women, whether it's young women athletes or young women business people or young women social entrepreneurs. So I'm spending incremental time over what I certainly did in my 20s and 30s trying to be encouraging and being a mentor to young women.”

Whitman won’t be the only female at the table when participating in MLS board meetings, as Dee Haslem represents the Columbus Crew and the future expansion team in St. Louis has an all-female ownership group. However, Whitman brings a unique voice to the table regardless because of her wide range of experience with a background that includes working in consumer products, media and technology.

FC Cincinnati controlling owner Carl Lindner III likes what she can offer the club, aside from just a sizable financial contribution. Forbes estimates Whitman’s net worth at $3 billion.

“We really added a great mind and a great talent with Meg,” Lindner said. “She's probably one of the more accomplished business executives of our time, so we can't be more pleased to have Meg and Griffin and their whole family as part of our investor group. Meg has been a leader and trailblazer in business for 40 years. Her accomplishments in technology and entertainment and consumer products are well-documented and speak for themselves.

“Meg and Griff's investment in FC Cincinnati, and by extension our Cincinnati community, well positions our club to achieve some pretty grand ambitions we have," Lindner continued. "We have always viewed soccer as a means to place Cincinnati on the world stage. With the West End stadium starting to rise from the ground and on pace to be open in 2021, we've got an amazing opportunity ahead of us to establish Cincinnati as the heart of American soccer. To do that, we can benefit from additional talent and perspectives to propel the club to create something that's bigger than ourselves and the embodiment of a rising Cincinnati.”

Whitman, whom Forbes ranked as the 20th most powerful woman in the world in 2014, is the first major investor in FC Cincinnati who lives outside the region, but she began her career here 40 years ago as an assistant at Procter & Gamble. She has served on the company’s board of directors for the last decade.

The 63-year-old business executive also served as CEO at eBay and Hewlett Packard, among other high-ranking positions elsewhere. Whitman especially feels like she can help FC Cincinnati continue to connect with fans through technology and social media.

“I have a deep and long-term background in technology ... and I have a long background in consumer technology and then with my most recent venture in content, not only at Quibi right now, but I also spent four years at the Walt Disney Co.,” Whitman said. “I think increasingly for these professional sports teams, content and the stories you tell about the players, about the team, about the fans, this is what people look for on social networking, and you have to build a narrative and people have to feel like they know the players and coaches. I think that intimacy in social networking is important, and we have a family business that does real estate development, so hopefully we can add a little input there.”

Whitman’s voice is polished, like that of a politician. That also is on her resumé. She served as a national co-chair of Sen. John McCain’s presidential campaign in 2008 and the following year announced she was running for governor of California. After spending a record-breaking $81 million on her primary campaign, she secured the Republican gubernatorial nomination in June 2010 but lost to Jerry Brown in the November general election.

In 2008, the New York Times called her the most likely person to become the first female president of the United States; however, Whitman said her political career is over.

“I took my turn in politics,” Whitman said. “I was obviously a big supporter of Mitt Romney, who was my first boss at Bain & Co., and obviously worked very hard for John McCain, so I took my turn at politics and decided it was a better fit for me to be in business. I stay active in understanding policy and what's going on, but you will not see me run again.”

For now, dabbling in professional sports is enough excitement. She sees soccer as a growing sport and thinks of FC Cincinnati as a new company. The club launched in August 2015 and spent three years in the United Soccer League before joining MLS this year.

Now, she looks forward to helping take the club to new levels – as she has almost everywhere else she has been involved.

“FC Cincinnati really is a startup,” she said. “I love these early-stage startups. You're dealing with the unknown, and there are so many things to figure out.”