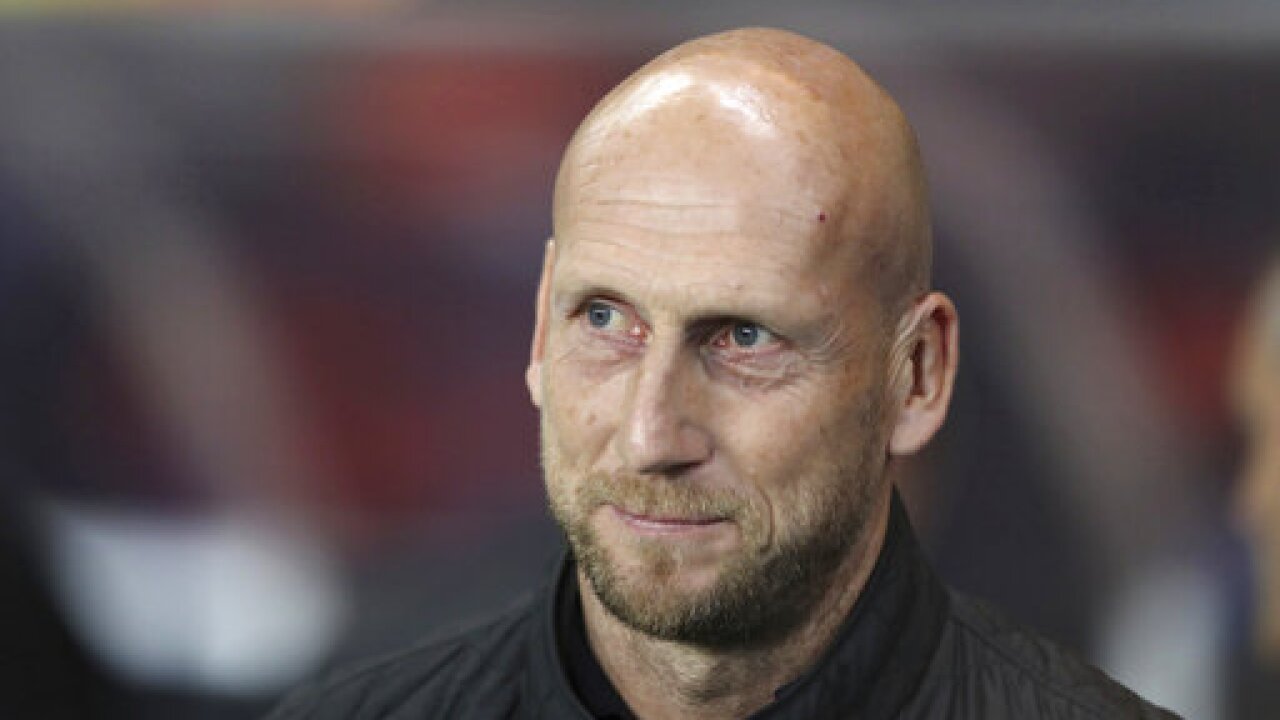 Nijkamp confirmed in an exclusive interview with WCPO on Thursday that Stam is “the main candidate.” However, no agreement has been reached between the two parties, and travel restrictions ultimately could impact a deal, so Nijkamp is still keeping options open with at least one other candidate.

Stam previously worked with Nijkamp when he served as technical director of Dutch club PEC Zwolle. He currently remains in The Netherlands, where Nijkamp also is hunkering down with his family during the COVID-19 pandemic.

“We are still under discussion, but we also feel like we are seeing the finish line,” Nijkamp said of the coaching search. “That means we hopefully have an understanding with our new head coach as soon as possible and can start the working permits process. But also the borders are closed, so at this moment I'm very confident and feel very good about it that Yoann (Damet) is managing the team in a good way at this moment. So let's see what is happening in the next couple days or weeks.”

Nijkamp declined to comment on why he believes Stam would be a good fit for the job because “it’s not a done deal.”

FC Cincinnati has been without a permanent head coach since Ron Jans resigned Feb. 17 amid an investigation he used a racial slur in front of players during a preseason trip in Arizona.

Stam played for several Dutch clubs before moving to Manchester United in 1998, where he won three Premier League titles. He finished his playing career with stints at Lazio, Milan and Ajax.

Stam has managed English side Reading in addition to his most recent stints at Feyenoord and PEC Zwolle. Nijkamp, who joined FC Cincinnati last May, hired him as Zwolle’s manager in December 2018, but Stam left for Feyenoord in March 2019 and eventually resigned in October.

The timeline of when Major League Soccer plans to resume play only complicates matters. The current proposal for returning to play, which Nijkamp confirmed has been pitched to clubs and players, includes all 26 teams gathering in Orlando and playing behind closed doors at the Disney sports complex and possibly other locations in that area. According to the Washington Post, players would report to Orlando as soon as June 1 for preseason training with the goal of games being played by July.

Nijkamp did not want to discuss the proposal in detail until Major League Soccer has announced a firm plan; however, when asked whether those fast-approaching dates would impact his coaching decision, Nijkamp said “not necessarily.”

“I feel very confident in the club also that we have Yoann as our interim coach, so the pressure is not on that part,” Nijkamp said. “We will still have a good preseason with him if that's what it looks like, but of course, if you appoint a head coach, you want him as soon as possible in your country so he can start with the group. When we have an agreement, we will try to get him as soon as possible in the U.S. with respect to the regulations on that part.”

At some point, though, FC Cincinnati will have to decide how long it is willing to wait for a foreign coach to be able to come into the country, as it remains unclear when borders will open for international travel.

Nijkamp said he couldn’t say what his timeline for a hire looks like until he knows when MLS will resume the season, which was halted when COVID-19 shutdowns began in mid-March. As of last week, MLS began allowing players to train individually at team facilities, but the group training moratorium remains in effect.

The league’s current proposal for restarting needs to be approved by the Players Association.

“I can't give an answer because I don't know what the restart of the season looks like,” he said. “If I know, if I have that understanding, it would be easier to answer. For example, if Sept. 1 is the restart of the league, I know when the preseason starts and when you want to have the head coach in place. That gives more time. But now, if it is quicker, then it's a little tighter in the timeline. It's something that is every day in my head.”

In current conditions, a domestic coach might be an easier choice; however, Nijkamp said that doesn’t change who he considers the leading candidate. Nijkamp confirmed that L.A. Galaxy assistant Dominic Kinnear is no longer a candidate, but there is another interesting option that he is considering if things don’t work out with Stam.

“You've got a Plan A and a Plan B,” Nijkamp said. “My main candidate, we are all confident and convinced that he will bring FC Cincinnati to the next level and will achieve our goals for now but also in the new stadium (in 2021). But there are reasons you will not at the end of the finish line have an agreement, financial but also the struggles at this moment for coming in the country. Then, always you have to think about Plan B and sometimes also Plan C.”