No fines or missed paychecks 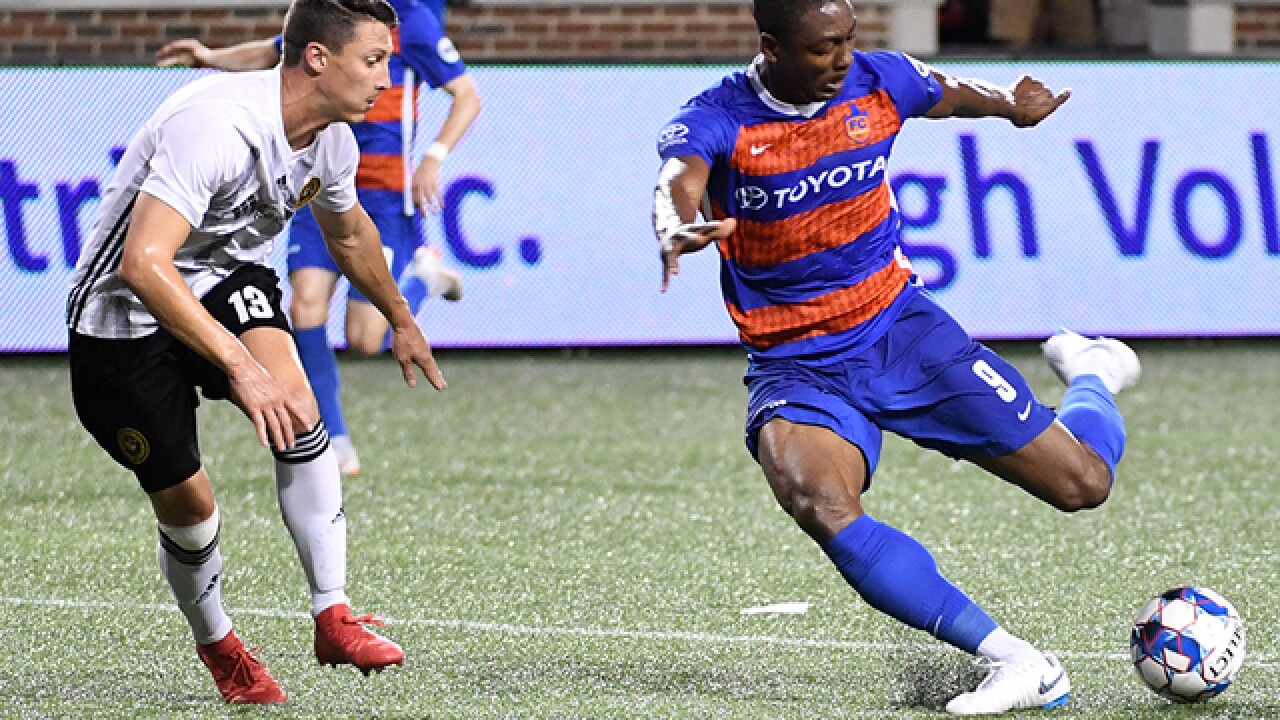 CINCINNATI — FC Cincinnati forward Fanendo Adi returned to the pitch for the first time since March 17 on Saturday – 10 days after Major League Soccer reinstated him at the conclusion of his court hearing for a reckless operation charge.

But the extended absence – missing two more games before even becoming available for selection – draws into question whether he actually would have been physically able to play during the time MLS required him to sit.

And in that case, did he actually face any punishment from the league for the incident in whichhe was accused of driving while impaired and excessively speeding?

Adi was nursing an ankle injury when he was detained early in the morning March 31. Reportedly heading to his home in Mason after a late night out following FCC’s home loss to Philadelphia Union, Adi was clocked traveling at 102 mph in a 65 mph zone on I-75 north in Butler County, and his blood-alcohol count of .124 was nearly twice the legal limit.

After a pre-trial court appearance on April 1, the 28-year-old designated player immediately entered the league’s Substance Abuse and Behavioral Health Program (SABH) and was barred from all team activities. He was “unavailable” for selection the next three games while MLS investigated.

Adi managed to plead down the original OVI and speeding charges and escaped with a $250 fine and one-year probation. The league re-instated him April 24 without ever mentioning any repercussions for his actions -- something that likely would have occurred in other major sports leagues. Adi was back to work the next day, training with the team for the first time since the March 17 injury.

In a press release announcing Adi's reinstatement, MLS wrote: “Following a citation by Ohio State Highway Patrol on the morning of Sunday, March 31, in accordance with the CBA, Adi was assessed by Substance Abuse and Behavioral Health (SABH) program doctors and was subsequently cleared to resume team activities. Additionally, Major League Soccer conducted an independent review of the incident and has cleared him to play.”

WCPO.com contacted the league to find out if Adi faced any fines and whether he had ever been officially suspended while FCC said he was “unavailable.” An MLS spokesperson said the league considered the three games he missed before reinstatement to be a suspension.

Adi was still paid for those three games. He was not fined.

The NFL, in comparison, seems to take a much harder line in situations like these. The league’s Personal Conduct Policy makes it clear that disciplinary action will follow any “conduct by anyone in the league that is illegal, violent, dangerous, or irresponsible" because that "puts innocent victims at risk, damages the reputation of others in the game, and undercuts public respect and support for the NFL.”

“It is not enough simply to avoid being found guilty of a crime,” the NFL policy reads. “We are all held to a higher standard and must conduct ourselves in a way that is responsible, promotes the values of the NFL, and is lawful. Players convicted of a crime or subject to a disposition of a criminal proceeding are subject to discipline. But even if the conduct does not result in a criminal conviction, players found to have engaged in any of the following conduct will be subject to discipline.”

According to the NFL’s substance abuse policy, last updated in 2016, the first offense for a violation of the law involving alcohol will result in a two-game suspension without pay, unless there are aggravating circumstances, which could lead to a steeper penalty. The second offense is a suspension without pay for eight games.

When former Bengals linebacker Rey Maualuga pleaded guilty to drunken driving in 2010, following a productive rookie season, he was fined two game checks and forfeited an additional two weeks’ worth of his signing bonus.

On the other end of the spectrum, Major League Baseball has been criticized at times for its lack of a clear policy to deal with alcohol-related misconduct. MLB rules state that either the team or the league can mete out punishment, but not both -- and teams take priority. There is no unified disciplinary code across clubs.

The league’s Joint Drug Prevention and Treatment Program mandates that any player arrested or charged with a crime related to alcohol be referred to a board to evaluate whether he should enroll in a treatment program, but a player’s participation in any program is voluntary.

In explaining the process of determining how MLS handles situations like Adi’s, Senior Director of Communications Lauren Hayes said the league focuses first on making sure the player is assessed by the SABH doctors and given the help he needs if it is determined there is a deeper underlying problem.

Adi, who had no prior arrests, was cleared almost immediately and was seen the next week at Mercy Health Training Center doing side work as part of his ankle rehab and conditioning, though he was not allowed to participate in team activities or even attend the games.

Hayes said if a player has a recurring problem or if the program doctors believe he has a behavioral issue, he is kept longer or sent for additional treatment. That was not the case with Adi. Entering the SABH program, she noted, also is not viewed as punishment.

So, as FCC continued to hold Adi from action, it seems his only real punishment from the league was his inability to attend team activities. Adi likely would have missed those three matches for which he was “suspended” anyway because of his ankle injury, which he appears to still be recovering from. He was not even on the bench for the April 27 loss at New York Red Bulls or Wednesday’s 2-0 loss at Philadelphia.

The league did not comment on Adi’s reinstatement beyond issuing the press release and answering general questions about policies, but Adi said he has learned from his mistake – even if he didn’t face much punishment.

"I can only say, 'Sorry,' " Adi said in an interview last week after his first training session with the team. " … To the fans, I hope they take me as a human being. I am 28, but I am still a young man. We learn from mistakes. It's sad, but it's obviously something I've learned from, and it's a promise it will never happen again.”