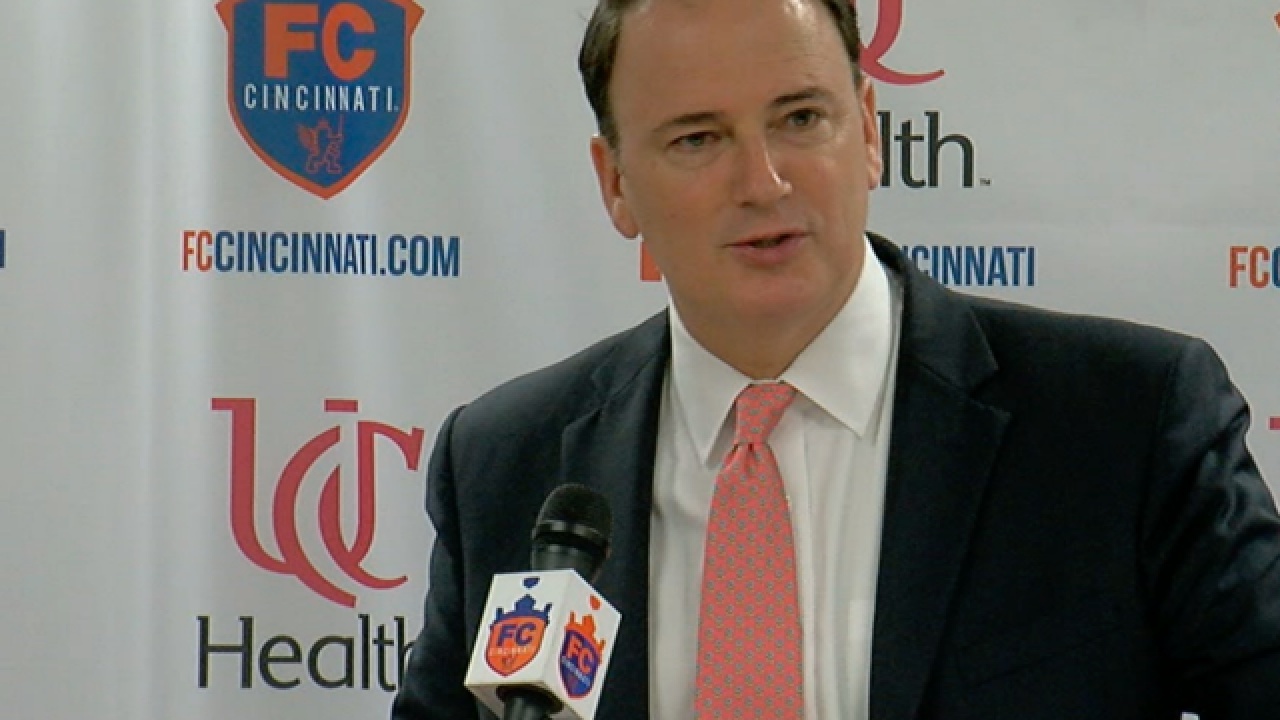 Copyright 2018 Scripps Media, Inc. All rights reserved. This material may not be published, broadcast, rewritten, or redistributed.
<p>Jeff Berding</p>

CINCINNATI -- For the record, Jeff Berding says the West End is in his rear-view mirror and he's moving on.

"We are working to secure rights to property in support of a prospective stadium development in Oakley," the FC Cincinnati vice president and general manager told WCPO Thursday.

The Board of Education's Wednesday vote to approve a plan to put FC Cincinnati's stadium in the West End - but only on its terms - apparently didn't change Berding's mind about walking away from a concerted two-month effort to win support from the board and the community.

The school board resolution basically approved the same conditions that the soccer club rejected last week. It contained nothing new except to say that the school board would accept contributions toward FC Cincinnati's "fair share of property taxes from any interested third party," specifically mentioning the city of Cincinnati.

If that was the school board's take-it-or-leave-it offer, Berding apparently left it.

After the vote, a club spokesperson said it would have no comment and referred WCPO to its March 14 statement, which detailed what the club called its  "final" offer.

Last week, Berding said FC Cincinnati had dropped plans for the West End and would turn to its other two options - Oakley and Newport. Berding said the club must decide on a site by the end of the month.

The school board vote came less than 24 hours after the West End Community Council overwhelmingly voted to oppose a plan to put a $250 million stadium project in its neighborhood. The WECC vote reflected strong opposition from many residents and activists who have spoken out against it in public meetings in recent weeks.

Over the past two weeks, the school board rejected three FC Cincinnati offers to swap land with CPS so the club could build on the site where the CPS-owned Stargel Stadium sits, next to Taft High School. In each proposal, the club agreed to pay for a new $10 million high school stadium to be built across the street.

But the two sides were far apart on how much FC Cincinnati should pay to the school board in the short term on its planned Major League Soccer stadium. Under a 1999 city agreement, developers can make payments directly to Cincinnati Public Schools in lieu of property taxes.

In its last proposal, the soccer club offered annual payments of $750,000 in the first 10 years. CPS, though, demanded $2 million per year for the first 10 years, insisting that was the real tax value for such a project. In its last public response, CPS said it would be willing to accept a 12-year deferred payment plan.

READ the club's March 14 statement about its latest offer here or below.

READ CPS' March 14 letter rejecting the club's offer and listing its demands here or below:

CPS also demanded a Community Benefits Agreement with community organizations and residents in the neighborhood. FC Cincinnati made a CBA proposal and plans for new programs at the schools with its last offer.

The club made its "final " offer at 10 a.m. March 14 and gave CPS until 5 p.m. that same day to respond. Berding explained that the club had to act fast because it was facing a deadline to pay $1 million to secure commercial property for the project.

The school board then met in emergency session that afternoon. Berding told WCPO he was looking for an encouraging response - not necessarily a "yes" vote. He wanted an indication that the two sides might come together.

After the emergency session, though, CPS sent a letter to FC Cincinnati calling the deadline "unreasonable," rejecting the offer, listing its demands and saying it wouldn't vote until its next regularly scheduled meeting March 21.

When FC Cincinnati made a formal bid last December to land an MLS expansion franchise,  it submitted Oakley as a tentative stadium site. However, the soccer club had turned most of its attention since January to the West End. It even secured options on 66 vacant properties and said it planned to build housing.

Berding had promised not to take anyone's home and to ditch the West End plan if a majority of the community didn’t want the stadium there. But he still had a tough sell. Distrustful residents expressed fears that they would be priced out of their homes, and activists, citing broken promises of affordable housing through the years, said the community would become gentrified.

Berding is still waiting for MLS to announce if it will award a franchise to FC Cincinnati. He said he hopes for an answer this month.

If MLS rejects FC Cincinnati, Berding said the club would not build a stadium but continue to play in the United Soccer League with UC's Nippert Stadium as its home.