Xavier coach Chris Mack is on his way out, and fans are turning their eyes to the future 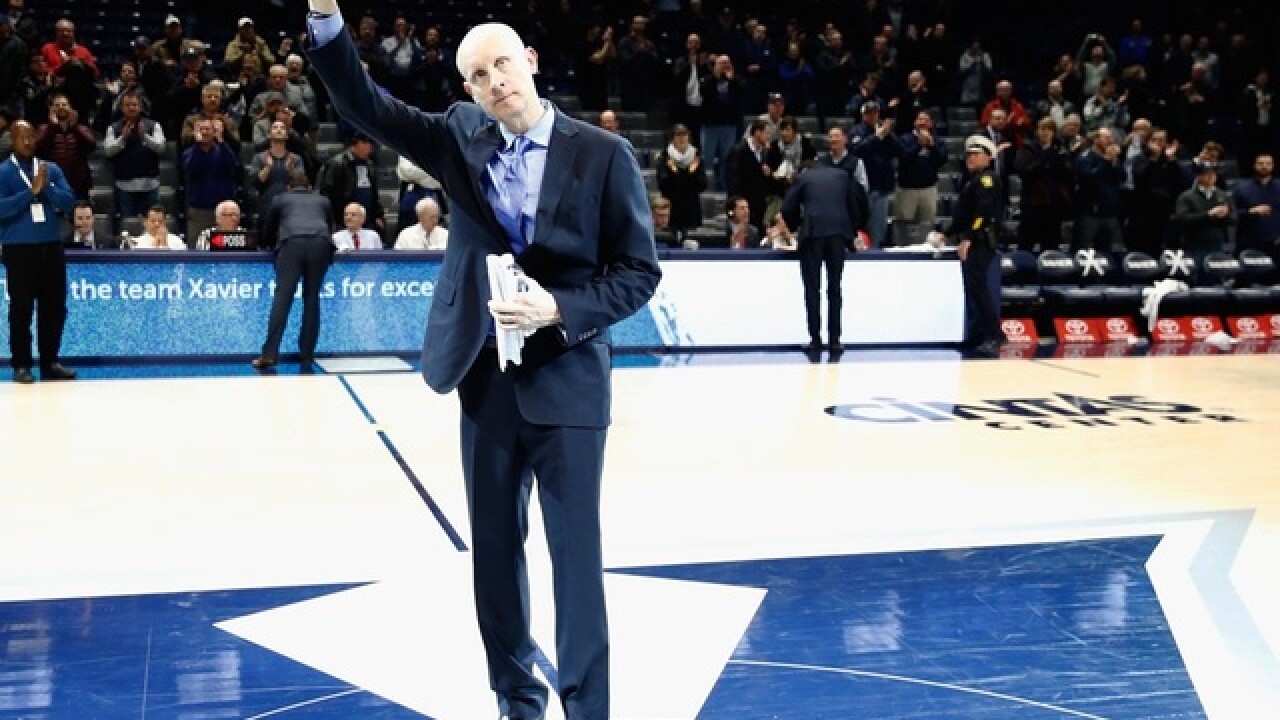 Image copyright 2018 Getty Images. All rights reserved. This material may not be published, broadcast, rewritten, or redistributed.
Andy Lyons/Getty Images
<p>CINCINNATI, OH - JANUARY 17: Chris Mack the head coach of the Xavier Musketeers waves to the crowd after 88-80 win over the St. John's Red Storm at Cintas Center on January 17, 2018 in Cincinnati, Ohio. With the win Mack became the all-time wins leader with 203 wins as the head coach at Xavier.</p>

CINCINNATI -- Xavier basketball head coach Chris Mack will cut his long ties to the Musketeers: He announced Tuesday he'd be leaving, and sources tell ESPN he's taking the top job at the University of Louisville for about $4 million per season in a seven-year deal.

Mack tweeted he loved and would miss his alma mater, but felt "felt like this situation offered a new and unique challenge that I could not turn down." Though he all but confirmed the Louisville move, Mack's statement didn't mention where, exactly, he was going.

He also took one last swipe at crosstown rival Cincinnati.

"Like every former player from X, I will be cheering for the Muskies every chance I get, especially on that night once a year we beat those guys from Clifton," Mack's statement said.

His move down Interstate 71 had been rumored for at least a week. ESPN's report cited unnamed sources, and WCPO has not been able to verify the information they provided. A meeting of UofL's Board of Trustees and the UofL Athletic Association Personnel Committee is scheduled for Wednesday afternoon, at the KFC YUM! Center.

Louisville's troubled athletic department could use the heat Mack will bring, according to WHAS sports director Kent Spencer. A federal probe that exposed former head coach Rick Pitino's participation in a "pay to play" scheme aimed at bribing recruits with cash and sponsorships has hobbled the basketball program's image on a nationwide level and forced it to vacate a pair of  NCAA Final Four appearances.

"They need some good momentum," he said. "I think Chris Mack is a guy who can possibly bring them some of that."

Louisville has agreed to a 7-year deal with Xavier's Chris Mack worth about $4 million per season, sources told ESPN.

In a news conference about Mack's depature, Xavier University athletic director Greg Christopher was up-front about staying on the down-low.

But he stressed that any specific announcements about Mack's replacement -- who might be in the running, how much they would make and what qualities the Musketeers would prioritize in their search -- were weeks away at the earliest.

For now, Christopher said Xavier would focus on developing search criteria in partnership with its student athletes, many of whom were disappointed to learn that Mack would be leaving.

"There's probably no one person who's more influential in the lives of our student athletes than these head coaches," he said, adding that the university would prioritize finding a replacement who would be as good for the well-being and development of individual players as for Xavier's win record.

"We want to get the best coach, and that's what's going to dictate the timeline," he said.

Whoever the replacement is and wherever they come from, they'll be stepping into a pair of large shoes. Mack's 215-97 record made him the Musketeers' all-time winningest coach, and he led the team into the NCAA tournament for eight of his nine seasons. There, Xavier made four Sweet 16 appearances and advancing to the Elite Eight in 2017.

Xavier won its first ever Big East championship this past season, and Mack was named the 2017-18 Big East Coach of the Year.