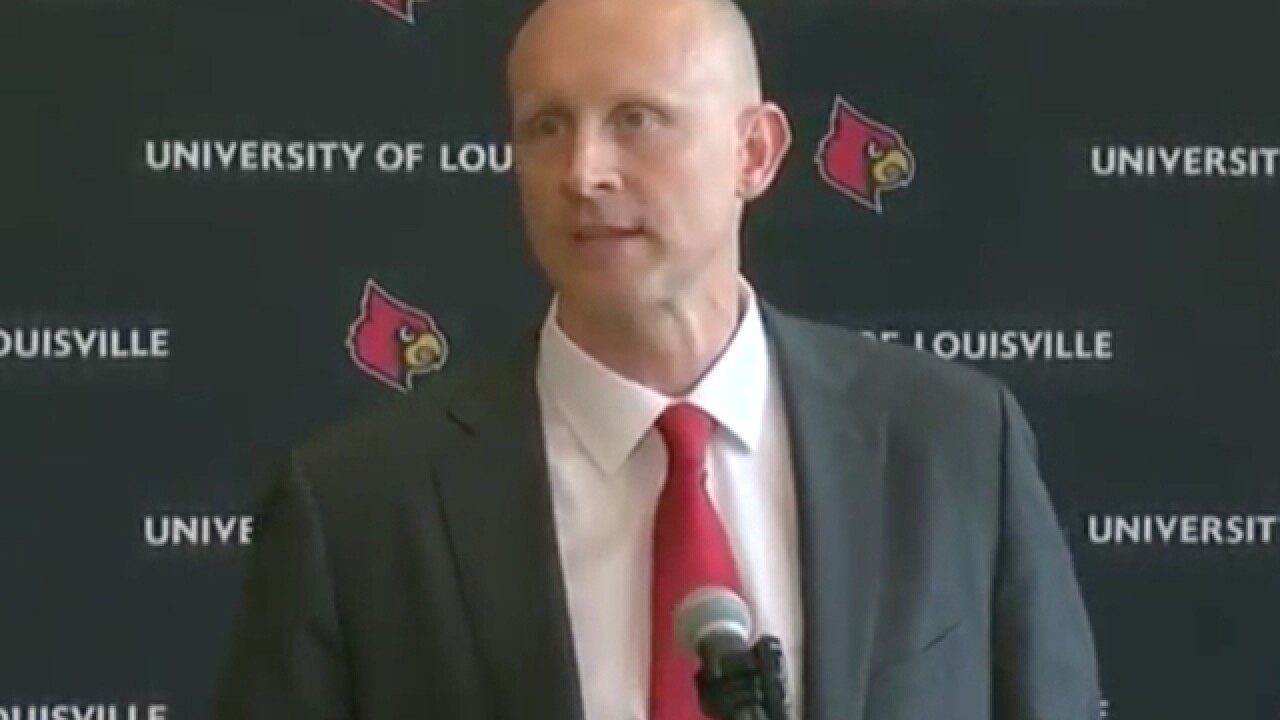 Copyright 2018 Scripps Media, Inc. All rights reserved. This material may not be published, broadcast, rewritten, or redistributed.
WCPO
<p>Chris Mack</p>

LOUISVILLE. Ky. – Chris Mack switched from a Xavier blue shirt to a Louisville red tie, white shirt and gray suit after arriving at the Yum Center for his coronation among the University of Louisville faithful Wednesday afternoon.

A crowd of several hundred might have mistaken him for a University of Kentucky infiltrator when he entered the ballroom with his two young daughters, dressed in red, and his wife Christi for his official welcome and news conference.

Mack made a great first impression, calling it "an opportunity of a lifetime" and promising that he would never leave Louisville for another coaching job.

"I will work my ass off every single day to make you proud of Louisville basketball," Mack said.

WATCH the entire Chris Mack news conference in the video player below:

Mack, who stands to make $28 million on a seven-year deal, acknowledged the FBI investigation and the dark clouds over the program following the sex and payoff scandals under previous coach Rick Pitino, but he said he wasn't afraid of possible NCAA sanctions or the challenge of restoring the program to its honor.

"I wouldn't have come here if I didn’t believe this place can shine again," Mack said.

"I know these past few months have been unbelievably difficult. They say the darkest clouds elicit the brightest lightning bolt. That lightning bolt is coming. That's not me, that's these guys (Louisville players). I urge you to fill the Yum.  Let’s give these guys a chance. Let's get this place rocking," Mack said.

"It's time to turn the page and start building something special."

Mack brought two Xavier assistants, Luke Murray and Mike Pegues - to the news conference and said he "fully intends" to add them to his Louisville staff (Which means Bill Murray goes from being a Xavier fan to a Louisville fan).

Mack said his heart would always have room for Xavier, his alma mater, and he thanked his former bosses, assistant coaches, fans and players during his 17 years there.

He thanked President Michael Graham and his athletic directors and coaches "for believing in me" and said he and his players and staff were in tears when he met with them in the locker room and told them he was leaving.

"To leave a situation that I gave my heart, gave two ACLs, a patella tendon, a lot of memories, to come to Louisville, obviously this place has to be special to me, and it is," Mack said, reciting the injuries he suffered as a Xavier player.

"I've always had a fondness for Louisville basketball," Mack said. "When the opportunity came up, I couldn't pass it up."

Still, UofL President Gregory Postel said it was tough to get Mack to leave Xavier.

"It was no small task to pry him from away from his alma mater, a school that he loves, and a community that embraced him," Postel said after welcoming Mack and his family.

"This is a family that fits, Chris is a coach that fits, and we’re terribly excited to have him here," new Athletic Director Vince Tyra said.

Tyra said Mack fit all the requirements for the job, including representing "the highest integrity in athletics and in life."

Tyra was confident Mack would bring back the glory after the NCAA ordered Louisville to vacate 123 wins and their 2013 national championship and 2012 Final Four banners.

"This person has to replace two lost banners with new ones," Tyra said, looking toward Mack, "and that person is sitting on this stage today."

It's unknown if or when the NCAA will examine allegations that an Adidas executive paid the family of former recruit Brian Bowen to attend Louisville.  Mack said it didn't affect his decision.

"I was told enough about it," Mack said. "A lot of programs have been touched, and it'll be interesting to see how it plays out. If it were a situation that would've scared me off, I would've said something to Vince."

Standing in a corner to Mack's right as he spoke were a group of Louisville players that included juniors Ray Spalding and Deng Adel, both of whom plan to work out with NBA clubs before deciding whether to return to school. The players appeared relieved to know someone will be in charge for a while following a lot of change since September.

"It's like, 'Whoo!'" freshman forward Malik Williams said. "It feels good, just going through everything this year and knowing we've got somebody locked in and solid for next year. It's just real good."

Mack said he was familiar with the Louisville players because "I recruited about half of them.

"I told them, 'You wouldn't come to me at Xavier, well, you're stuck with me, I'm just going to come to you,'" Mack said.

Mack said he expects his players to be "tough together." He made it clear that there would be one Louisville team not separated by who recruited them.

No one in the Louisville crowd seemed to flinch when Mack said he reached out twice to Pitino during the interviewing process. Mack expressed admiration for Crum and Pitino, referring to both as great Hall of Fame coaches.

"I know I have big shoes to fill," Mack said.

Former U of L coach Denny Crum on the hiring of Chris Mack, said about the fans: "If they don’t get on board they will be missing a very good thing moving forward."

Mack got a laugh when he told a story about Crum.

He said his first encounter with Crum came when Xavier played Louisville at the Great Alaska Shootout. Mack was just a part-time assistant - director of basketball operations - but he was familiar with the experimental rules being used in the tournament.

One rule allowed a team being fouled for the seventh time to take the ball out of bounds rather than shoot free throws.

With Xavier ahead by two and about 30 seconds left, Louisville started fouling, Mack said.

"I told Coach Prosser we should take the ball out of bounds," Mack said.

So Xavier did and Louisville fouled again.

"This went on seven times," Mack said. "After the game, Coach Crum said, 'If that experimental rule ever comes into play ...'

"Well, you can probably guess the rest."

Mack said he met with Tyra for about eight hours in Cincinnati Saturday, when he was supposed to be watching his daughter's volleyball games.

Louisville slumped to a 22-14 record last season under the weight of the Pitino payoff scandal and the firings of Pitino and Athletic Director Tom Jurich. The Cardinals missed the NCAA Tournament and lost in the NIT quarterfinals under interim coach David Padgett.

Mack, a St. Xavier High School grad, said he wanted Louisville fans to know something about him and he told them about the injuries he encountered as a player after he transferred from Evansville to Xavier as a junior.

After sitting out his transfer year, Mack said he tore the ACL in his left knee in the first eight seconds of the first exhibition game. After a grueling period of rehab, he blew out his right knee in a summer league game, and his playing career was over.

He said Prosser gave him a book after his second ACL tear called "Tough Times Never Last, But Tough People Do," and he's taken that to heart that ever since.

Mack followed Prosser to Wake Forest and returned to Xavier in 2007 as Sean Miller's top assistant. He said some people thought he was crazy for leaving a Wake Forest team with superstar Chris Paul that was a preseason No. 1.

Besides that, he had to take a pay cut.

"I did it because I followed my heart," Mack said.

Mack said he had lots of coaching offers over the last nine years at Xavier and people thought he was crazy to pass up some of them.

"So when people say, 'Why Louisville, he's crazy,' it's because I'm never afraid of a challenge," Mack said.