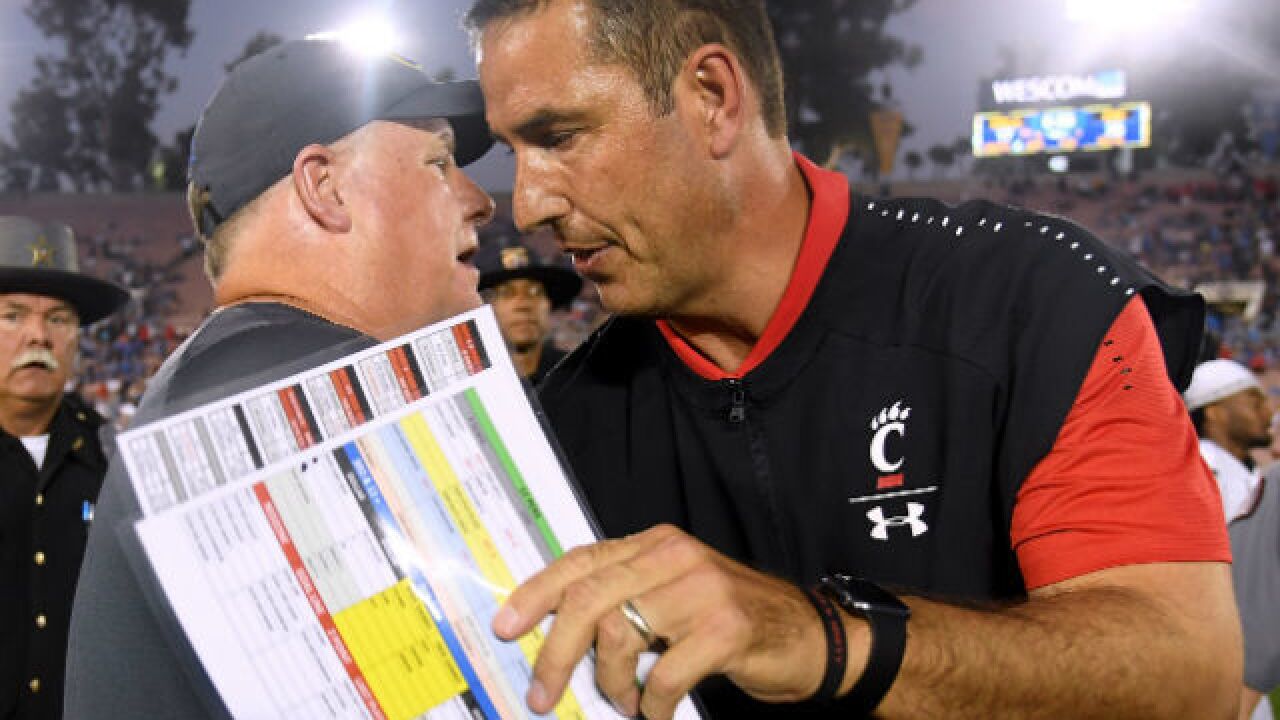 Image copyright 2018 Getty Images. All rights reserved. This material may not be published, broadcast, rewritten, or redistributed.
<p>PASADENA, CA - SEPTEMBER 01: Head coach Chip Kelly of the UCLA Bruins and head coach Luke Fickell of the Cincinnati Bearcats shake hands at the end of the game as UCLA Bruins loses 26-17 on Kelly's Bruin coaching debut at Rose Bowl on September 1, 2018 in Pasadena, California. (Photo by Harry How/Getty Images)</p>

CINCINNATI - When it comes to bowl matchups and the Cincinnati Bearcats, does ESPN know something no one else does?

A new possible bowl matchup for 10-2 UC emerged in predictions this week.

ESPN's Kyle Bonagura has the Bearcats playing 7-5 Miami (Florida) in the Walk-On’s Independence Bowl Dec. 27 in Shreveport, Louisiana. The 1:30 p.m. game will be televised by ESPN.

With the bid announcements due Sunday, Yahoo Sports, the Sporting News and SBNation have UC playing 7-5 Boston College in the Military Bowl  in Annapolis, Maryland, at noon on New Year's Eve.

The Orlando Sentinel has UC vs. 5-6 Virginia Tech in the Birmingham Bowl, presuming the Hokies beat Marshall on Saturday to get six wins to qualify for a bowl. That game is at noon on Dec. 22.

Bowl pairings will be announced Sunday after the four playoff teams have been selected.

As for Ohio State, Kentucky and Miami (Ohio):

All but one of those experts predict 11-1 Ohio State will lose the fourth playoff spot to 11-1 Oklahoma and end up in the Rose Bowl vs. 9-3 Washington on New Year's Day. Georgia was No. 4 in this week's College Football Playoff rankings announced Tuesday, followed by Oklahoma and Ohio State.

The thinking is No. 1 Alabama (12-0) will beat Georgia (11-1) in the SEC Championship Saturday and knock the Bulldogs out of the playoff, and Oklahoma will beat Texas (9-3) in the Big 12 Championship. If Oklahoma loses, though, Ohio State can get in if it beats Northwestern (8-4) for the Big Ten title.

And the 6-6 Miami Redhawks? It looks like they're staying home because there are more bowl eligible teams (82 if Virginia Tech wins Saturday) than bowl slots (78), according to Yahoo! Sports. The Mid-American Conference has five bowl spots and seven bowl-eligible teams, so Miami and Eastern Michigan (7-5) could get left out, Yahoo! Sports says.

However, ESPN's Bonagura slots Miami vs. Florida International in the Makers Wanted Bahamas Bowl in  Nassau at 12:30 p.m. on Dec. 21.