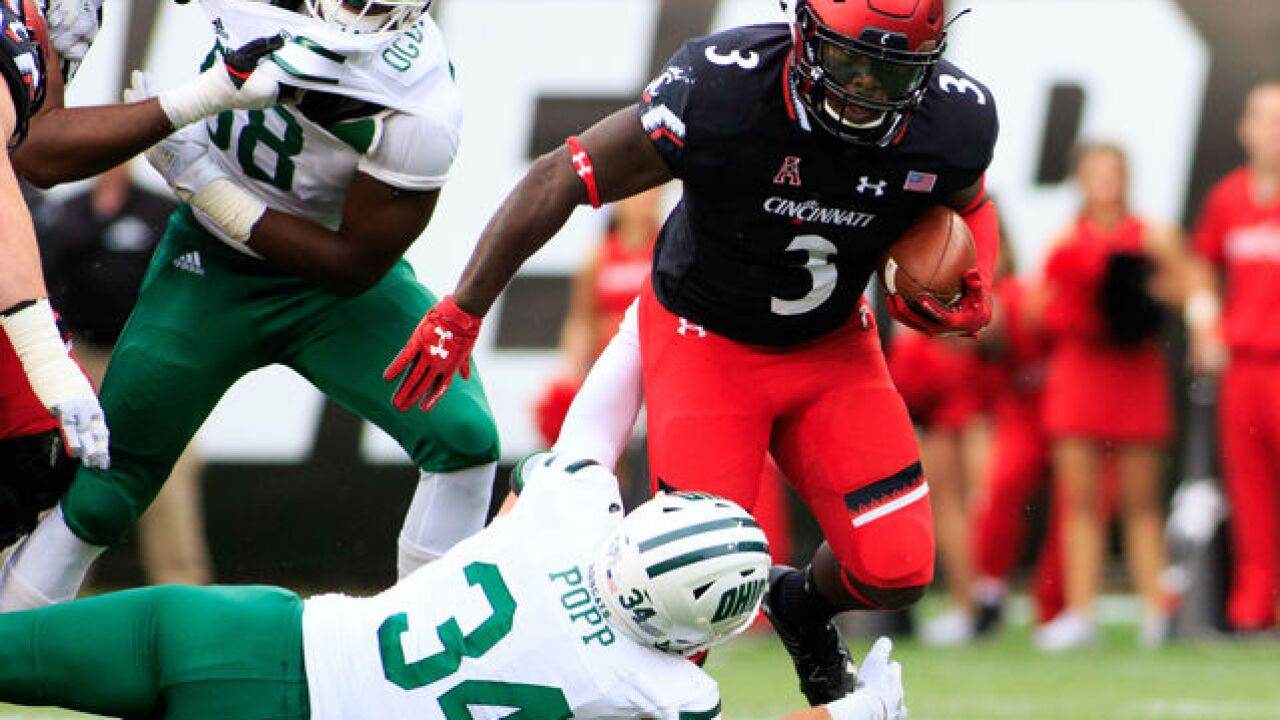 Copyright 2018 Scripps Media, Inc. All rights reserved. This material may not be published, broadcast, rewritten, or redistributed.
<p>CINCINNATI, OH - SEPTEMBER 22: Michael Warren II #3 of the Cincinnati Bearcats runs the ball against the Ohio Bobcats at Nippert Stadium on September 22, 2018 in Cincinnati, Ohio. (Photo by Justin Casterline/Getty Images)</p>

CINCINNATI - After the Cincinnati Bearcats fell behind 21-0, it looked like the Happiest College Football Fans in America, according to ESPN, were going to go home crushed.

But Desmond Ridder led UC on a 92-yard fourth-quarter drive to take the lead, and James Wiggins’ interception stopped the Ohio Bobcats at the Bearcats’ 1-yard line with 52 seconds left for a 34-30 win at Nippert Stadium on Saturday.

“We saw the resiliency of this team,” Bearcats coach Luke Fickell said. “I'm most proud of the way they kept their chin up, especially the way it happened. We wouldn’t have had a chance last year.”

Michael Warren’s 3-yard run brought the Bearcats all the way back from a three-touchdown deficit for Cincinnati’s fourth straight win to start the season. Cincinnati has already matched its win totals of the last two seasons.

The Bobcats got the ball back with 3:18 left after the Warren touchdown run. Ohio quarterback Nathan Rourke, a thorn in the Bearcats' side all day,  broke away for a 37-yard run on the first play to the Bearcats 38. A pass-interference penalty against Cam Jefferies put the ball on the Cincinnati 13. A.J. Ouelette picked up 11 yards with two runs to the 2 with under two minutes left.

Cincinnati’s Jarrell White tackled Ouelette for a loss to the Bearcats 4. Wiggins made his interception at the 1 on the next play.

"Number four was their guy (Papi White). I knew I had to get my hands on him,” Wiggins said. “The quarterback watched him the whole way and I jumped in front of it.”

Rourke frustrated the Bearcats defense all day, eluding tacklers or getting passes off in the nick of time to draw three roughing-the-passer penalties. He rushed for 96 yards, including a 37-yard run on Ohio’s final possession, and passed for 178 yards

The Bobcats took a three-touchdown lead in the second quarter after Rourke improvised on a broken play. Rourke, who also passed for a touchdown and had a reception called back by penalty, eluded tacklers on a 3-yard run when the intended ball carrier was nowhere to be found.

The second half was another story.

“It was the tale of two halves,” said Fickell, who watched his defense step up and hold Rourke and the Bobcats to a pair of field goals.

The Bearcats were limited to one first down until they took possession with 9:54 left in the first half, driving 80 yards in nine plays. Warren capped the drive with a 24-yard run.

Ohio put together a 73-yard drive with the benefit of three major penalties, including an unsportsmanlike penalty on an assistant coach, to take a 24-7 halftime lead with a 25-yard field goal by Louis Zervos.

Cincinnati scored quickly after the second-half kickoff. Ridder completed a 77-yard pass to Rashad Medaris for a touchdown. It was the longest pass play of Ridder’s career and the first career TD catch by Medaris.

“You might think it was negative in the locker room at halftime but it wasn’t,” said Ridder, who has become a boisterous leader. “No disrespect to anyone, but I think that I am the best player on the field when I’m out there. We knew we had to come out and score on our first drive in the second half.”

Ridder finished with 274 yards on 19-of-29 passing. He threw one interception, the first of his career. Warren was the leading rusher with 124 yards in 24 carries.

It was the first meeting in 36 years in this intrastate rivalry that began in 1896. The Bearcats grabbed a 24-23 lead in the series that includes four ties.