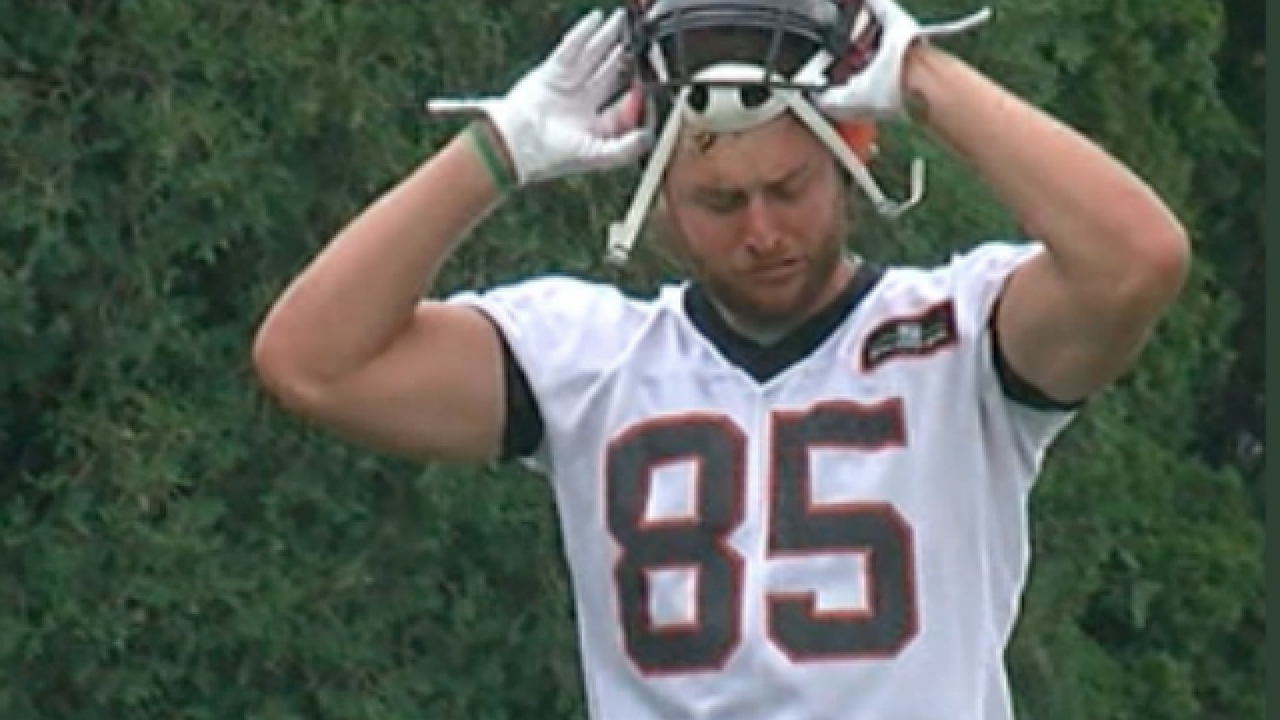 Copyright 2018 Scripps Media, Inc. All rights reserved. This material may not be published, broadcast, rewritten, or redistributed.
<p>Tyler Eifert at 2018 Bengals minicamp</p>

CINCINNATI -- When Tyler Eifert didn’t participate in Cincinnati Bengals minicamp last month, head coach Marvin Lewis shrugged it off as a pre-emptive measure to avoid injury that was more likely to occur while practicing on the turf at Paul Brown Stadium.

That didn’t satisfy a pessimistic fan base that has little reason not to doubt the health of a one-time Pro Bowl tight end that just can’t seem to stay on the field. Eifert, who played just two games last year because of knee and back surgeries, reinjured his back in the spring.

Last Thursday, before the team even headed to its first practice of training camp, it became clear: Eifert is not ready. The Bengals placed Eifert on the active physically unable to perform list, and he was limited to agility work and conditioning drills during practice later that afternoon.

On Monday, The Bengals gave an update on the tight end, saying Eifert passed his physical and will return to practice today.

Eifert declined an interview after practice last week, and Lewis laughed off a question about the status of Eifert and linebacker Vontaze Burfict, who was placed on the non-football injury list Thursday for undisclosed reasons.

They’ll both be fine,” Lewis said with a laugh. “We will be happy when we’re ready to have them back.”

Upon arriving in Cincinnati earlier this week, Eifert led people to believe he might be ready to go Day 1 when he tweeted: "Back in Cincinnati for training camp and feeling great! Camp is a grind but I'm looking forward to it!"

The Bengals haven’t had Eifert for a full season since he was drafted in the first round in 2013. He played 15 of 16 games his rookie year but had just one appearance in 2014. He played only 10 games combined over the last two seasons because of various injuries and back surgeries in consecutive offseasons.

Cincinnati re-signed him to a one-year, incentive-laden deal in March.

“He’s going to get back whenever he is ready,” Bengals quarterback Andy Dalton said last week. “I know he’s felt good, so whenever the time is for him, we’ll be ready for him. For him, he doesn’t need to rush anything. He just needs to be ready for when the season comes.”

Last week, Burfict cut his workout short after about 40 minutes and appeared less mobile than Eifert.

Burfict will begin this season with a four-game suspension for violations of the NFL's performance-enhancing drug policy, marking the third straight year he will miss time because of rule violations, but it was a bit of a surprise that he showed up on the non-football injury list. He was held from practices last year because he did not pass his physicals and needed more conditioning work.

“Sometimes guys don’t have an opportunity to finish their work because they get a little nick as they are working out leading up to camp,” Lewis said. “If guys are not ready to necessarily finish their conditioning test and so forth, we have the ability to fail them on the physical and put them in that situation to allow them to get in the best shape they can to be out here in practice with us.”

Bengals defensive coordinator Teryl Austin said Tuesday at the team’s pre-camp media luncheon that he expected Burfict to go through training camp as if he were not going to miss the first four games, so his relegation to the rehab field is not related to his suspension.

Lewis cited Preston Brown as a player who has stepped up and will need to perform in Burfict’s absence, but Bengals brass isn’t yet writing off Eifert, who still has a chance to be ready for the season.

“Hopefully Tyler Eifert can come back and be a factor for us,” Bengals director of player personnel Duke Tobin said Tuesday during the annual pre-camp media luncheon. “I can’t predict the future on that one, but I can testify to the fact that he made a difference when he was up and running for us. We know what he can do if he can get back to that level. I know his full intent is to get back to that level. We’ll see if he can.”

Ryan Hewitt joined Burfict on the non-football injury list Thursday and worked closely with Eifert on the rehab field. The Bengals announced Monday Hewitt also passed his physical and is expected to return to practice today.

There was just one noticeable injury sustained during practice as offensive guard Rod Taylor, a seventh-round draft pick in April, sustained an apparent right knee injury and was carted off the field.

Center Billy Price, who had pectoral surgery after the combine, was full go for the first time since joining the Bengals as a first-round draft pick. But the former Ohio State University captain didn’t have a great day while putting three snaps on the ground. Lewis said that’s just part of the learning curve.

“That’s the first time he’s had to block the guy over him,” Lewis said. “He worked there all spring against the guys not moving back, but this is the first time he’s had a chance to work against guys in different color jerseys, so it’s a little different. There’s Part 1 and then Part 2, so that was good to see. Today, he had his bad day out, but he’s spent his one bad day.”