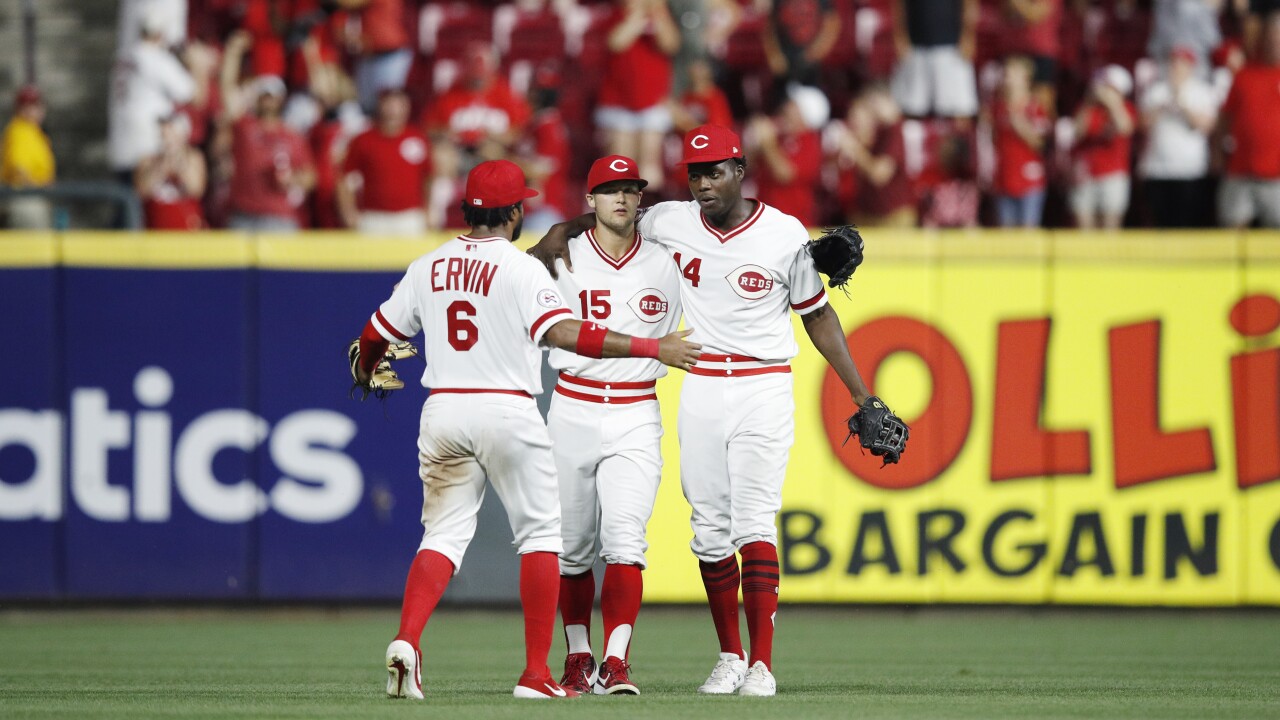 CINCINNATI — The more things change in the Reds outfield, the more they seem the same for the outfielders themselves.

On Opening Day, the Reds’ outfield consisted of Yasiel Puig in right, Scott Schebler in center and Jesse Winker in left, with Matt Kemp on the bench.

But things have changed considerably since then.

Schebler spent most of the season in the minor leagues before undergoing shoulder surgery. Kemp was released in May. And Puig was traded at the July deadline.

“It’s changed a lot, even more so in the last few weeks,” said Reds manager David Bell. “We lost guys that were big parts of the team.”

But the guys that have stepped in are hardly strangers.

On April 4, Opening Day at Fifth Third Field in Toledo, Triple-A Louisville’s outfield had Phillip Ervin in center and Aristides Aquino in right, just as the Reds had on Monday night in their series opener vs. San Diego.

Ervin, Aquino, Nick Senzel, Winker and Brian O’Grady have played together at various levels in the minors for the past few years. And Reds infielder/outfielder Josh VanMeter and O’Grady were road roommates at Louisville.

With Puig and Kemp gone, Ervin, 27, became the oldest Reds outfielder. That is, until O’Grady was recalled Sunday. He’s 29 days older than Ervin. Winker just turned 26. Aquino is 25. Senzel is 24.

Ervin and Winker made their big-league debuts in 2017. Aquino had a cameo last year before turning the baseball world on its head this season with 11 home runs in his first 18 games. O’Grady and VanMeter reached the majors this year.

“I’m very close with them,” said O’Grady. “I’ve played with them for a while. We all just became better hitters. We were roommates when (VanMeter) got called up, so that was pretty cool. Then Aquino going up was pretty cool, too. I’ve been with him since I got drafted (in 2014).”

And now they’re competing for a couple of coveted spots in the Reds outfield.

With Puig, Kemp and highly ranked prospect Taylor Trammell gone, the corner outfield spots are ripe for the taking adjacent to Senzel, who has center field locked up for the foreseeable future.

Competition in sports should raise the level of play, and that has been the case for this group so far. In their last 15 games entering Friday night’s series opener in Pittsburgh, Ervin was batting .349, Winker .343 before he went on the injured list, Aquino .309 to go along with 10 homers and 19 RBI, and VanMeter .319. Senzel was batting .264 with 10 homers and 38 RBI in 337 at-bats.

Winker has been bothered by upper-back tightness and hasn’t started a game since Aug. 14. VanMeter has made 25 appearances in left field, but he also has played second, third and first, with Joey Votto on the injured list. Jose Peraza and relief pitcher Michael Lorenzen get spells in the outfield as well.

“I feel like we’ve got a good group, a young group,” Ervin said. “Everybody’s playing well and we’re feeding off each other. We're all pushing each other to be the best we can be, working hard, having that energy. There’s a good vibe between us.”

When Derek Dietrich comes off the IL – he’s currently rehabbing at Louisville – and Votto returns and Winker is healthy, the Reds will have some roster decisions to make. For now, Bell has a little bit more leeway to get playing time for the youngsters.

For the Reds, it’s an abundance of riches, and it's one that could pay dividends if the club is eyeing contention in 2020.

But for now, it’s a daily conundrum for Bell, who must balance playing time with trying to put the best possible team on the field. Bell has been known to stick with the hot hand, but that has been hard to distinguish with this group.

Each of these guys has been fairly consistent all season. Of course, all Aquino did was become the first major league player in history to hit 11 home runs in his first 18 career games.

“I wouldn’t say it’s difficult decisions,” Bell said. “The goal every day is to put our best lineup on the field, especially at this point in the year. There are always tough calls to make. Guys want to play every day. I want to encourage that way of thinking.”

Center field was a new position for Senzel when he was promoted from Triple-A on May 3. It didn’t take long before he eliminated most doubts about him replacing Billy Hamilton.

Unless one of them gets moved, Aquino, Senzel and Ervin are under team control until 2024 and Winker until 2023. These guys are not going anywhere anytime soon.

The Reds have slipped further below .500 in recent weeks and are on the outside looking in, in terms of postseason contention. But with the way the starting rotation is shaping up for next season, it is reasonable to expect that the Reds can field a club that has a legitimate chance to make a run.

And the Reds’ young outfielders would like to be around to see that happen.

“We all want the same goal -- to win,” Ervin said. “We want to play, but whatever, we all want to win. We’ve got a good thing going right now.”