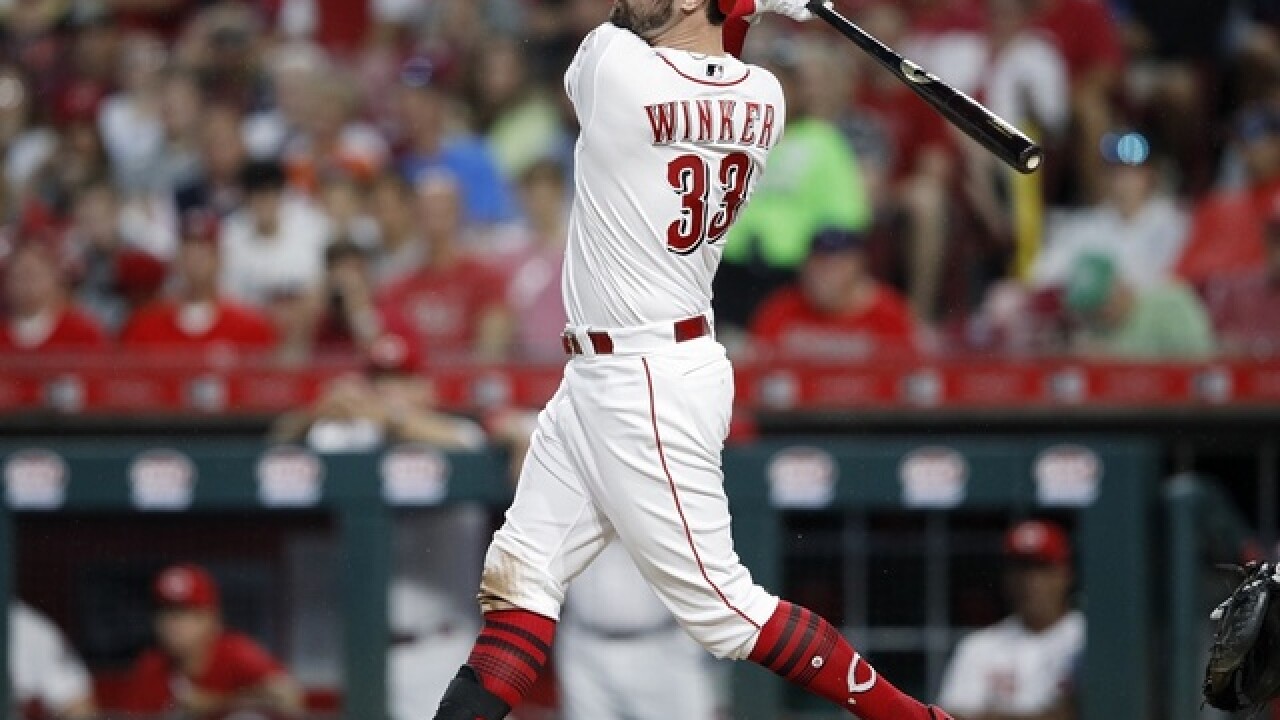 Image copyright 2018 Getty Images. All rights reserved. This material may not be published, broadcast, rewritten, or redistributed.
Joe Robbins
<p>CINCINNATI, OH - JUNE 21: Jesse Winker #33 of the Cincinnati Reds hits a grand slam home run in the sixth inning to give his team the lead against the Chicago Cubs at Great American Ball Park on June 21, 2018 in Cincinnati, Ohio. (Photo by Joe Robbins/Getty Images)</p>

CINCINNATI (AP) -- Jesse Winker hit his first career game-ending homer against the Rockies on June 7 and got a pair of Carlos Gonzalez's white batting gloves during the series as a keepsake. He wore them for another career breakthrough on Thursday night.

Winker hit his first major league grand slam during a big sixth-inning rally, putting Matt Harvey in line for his second win for the Cincinnati Reds, 6-2 over the Chicago Cubs. The Reds sent 11 batters to the plate and scored six times, matching their biggest inning of the season .

"Guys put together great at-bats in front of me," Winker said. "Obviously, you can't hit a grand slam unless guys get on base."

Kyle Hendricks (5-7) walked three to set up the two-out rally, including Eugenio Suarez with the bases loaded. Hendricks has equaled his career high with four walks in each of his last two starts.

"That's not me, giving up walks like that," Hendricks said. "Those were the problem there."

Winker connected on the second pitch from left-hander Randy Rosario, who hadn't allowed a homer this season. The Reds' sixth grand slam of the season moved them into a tie with Boston for most in the majors.

Billy Hamilton walked, stole a base, scored and singled home the final run during the rally.

Harvey (2-5) went six innings for his first victory since May 22, allowing five hits, including Javier Baez's two-run double. He'd lost his last three decisions with the Reds, who got him from the Mets for catcher Devin Mesoraco in a deal on May 8.

Harvey plunked Kris Bryant on the left hand and Anthony Rizzo on the left shin in the third inning, but both remained in the game. Baez's two-run double was his fourth extra-base hit in the last two games.

Amir Garrett relieved and fanned Rizzo on three pitches to end a bases-loaded threat in the seventh. Jared Hughes pitched out of a two-on jam in the eighth and finished for his fifth save.

The Reds have won four straight, their second-best streak of the season. They took six in a row from May 8-13.

The Reds' comeback left the NL Central teams tied 3-3 in their season series. Chicago has gone 43-20 against Cincinnati since 2015, including a 23-11 mark at Great American Ball Park.

Scooter Gennett gave Hendricks a workout with a 12-pitch at-bat in the first inning before flying out.

Joey Votto came into the game 8 for 16 in his career against Hendricks with a pair of homers and 10 walks. He grounded out, struck out and walked.

Harvey tried to put down a sacrifice bunt in the fifth, but catcher Willson Contreras quickly got to the ball and threw to second to start an inning-ending double play.

Jason Heyward had three singles and a double for his ninth career four-hit game. ... The Reds have six grand slams in the last 31 days. The only other teams in NL history with six in 31 days were the 1996 Expos, the 1997 Braves and the 2006 Mets, according to STATS. ... Suarez extended his hitting streak to a career-high 11 games.

Cubs: Yu Darvish felt good a day after throwing 50 pitches in a simulated game, manager Joe Maddon said. He could begin a rehab assignment soon. Darvish has been sidelined since May 23 because of tendinitis in his right triceps. ... Left-handed reliever Brian Duensing could rejoin the team Friday. He's been on bereavement leave following his grandfather's death.

Cubs: Jose Quintana (6-5) started at Great American Ball Park on May 19 and allowed just one hit in seven innings of a 10-0 win. He's 2-0 in three career starts against the Reds. The left-hander has been much better on the road this season: 2.78 ERA in eight starts compared to a 6.00 ERA in six starts at Wrigley Field.