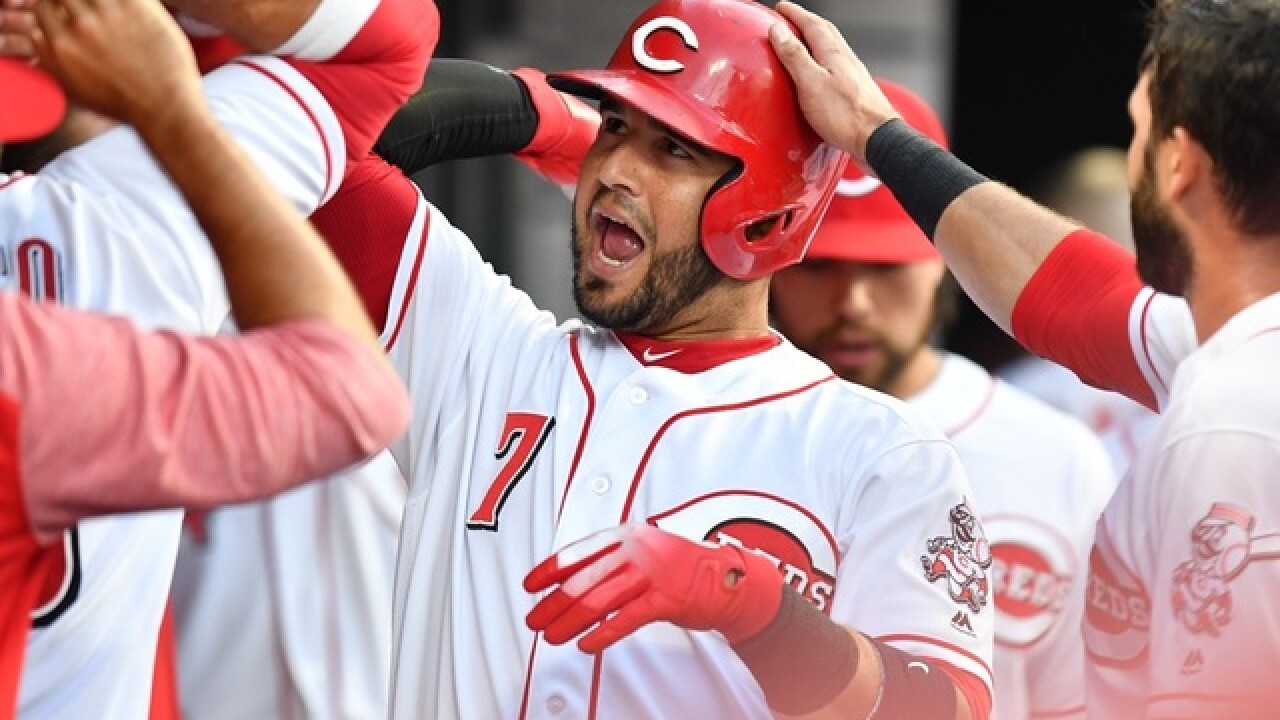 Image copyright 2018 Getty Images. All rights reserved. This material may not be published, broadcast, rewritten, or redistributed.
Jamie Sabau/Getty Images
<p>CINCINNATI, OH - JUNE 22: Eugenio Suarez #7 of the Cincinnati Reds celebrates in the dugout after hitting a two-run home run in the fifth inning against the Chicago Cubs at Great American Ball Park on June 22, 2018 in Cincinnati, Ohio. Cincinnati defeated Chicago 6-3.</p>

CINCINNATI -- Whenever the Cubs come to town, their fans fill the stands at Great American Ball Park and their offense usually carries the day. Not so for the last two.

Eugenio Suarez hit a go-ahead homer off Jose Quintana in the fifth inning, and the Cincinnati Reds held on for their fifth straight victory Friday night, 6-3 over the Cubs .

The Reds have won the first two games in the four-game set, a recent rarity in the rivalry. It's only the second time in the last two years that they've won back-to-back games in a series against Chicago. The Cubs are 43-21 against the Reds over the last four seasons.

Cincinnati's winning streak is one shy of its season high. The Reds are last in the NL Central at 30-45.

Suarez's two-run shot in the fifth inning off Quintana (6-6) gave him a team-high 16 homers and put the Reds ahead 4-3. Billy Hamilton and Joey Votto also singled home runs off Quintana, who had allowed only six earned runs in his last four starts combined.

Quintana hung a changeup on his second pitch to Suarez, who has four homers in his last six games.

"I just missed my spot — a bad pitch," Quintana said through a translator. "A bad time to have that happen."

Suarez also singled twice and extended his hitting streak to a career-high 12 games, the longest by a Reds third baseman since Todd Frazier hit in 14 straight in 2014.

Javier Baez drove in a run with a bunt single off Luis Castillo (5-8), and Kyle Schwarber followed with a two-run homer, his third in four games. Castillo went 5 2/3 innings for his first victory since May 24, ending a streak of four straight losses.

Raisel Iglesias retired the side in the ninth for his 12th save in 14 chances.

"That was one of our cleaner ballgames of the season," interim manager Jim Riggleman said. "We played a good ballgame — offensively, defensively, ran the bases well, timely hitting."

"We've played maybe two of our least-impressive games in a month," manager Joe Maddon said. "It's just not been us playing our typical game."

Left-handed reliever Brian Duensing was activated off the bereavement list before the game. He had been gone for four days to attend his grandfather's funeral. The Cubs optioned right-hander Justin Hancock to Triple-A Iowa.

Cubs reliever Justin Wilson made a diving grab of Jesse Winker's bunt in the seventh, landing on his chest while stretching for the ball. He was shaken up for a moment but stayed in the game.

Each of Schwarber's last three hits has been a home run. Schwarber grew up in nearby Middletown and attended Reds games at Great American. He's batted .318 in 30 career games against the Reds with nine homers and 25 RBIs.

Bengals center Billy Price threw a ceremonial pitch pregame, bouncing it to the plate. Price was the Bengals' top pick in the draft.

Cubs: Yu Darvish could begin a rehab assignment next week. He threw 50 pitches in a simulated game without problem on Wednesday. Darvish has been sidelined since May 23 because of tendinitis in his right triceps.

Reds: Homer Bailey will make a rehab start for Triple-A Louisville on Saturday, throwing between 75 and 90 pitches. Bailey has been sidelined since June 2 with a sore right knee. He's 1-7 with a 6.68 ERA.

Cubs: Luke Farrell (2-2) will make his first start of the season after a dozen relief appearances.

Reds: Anthony DeSclafani makes his fourth start. He was sidelined for the first two months with a strained oblique suffered during spring training. DeSclafani is 2-1 with a 4.60 ERA.