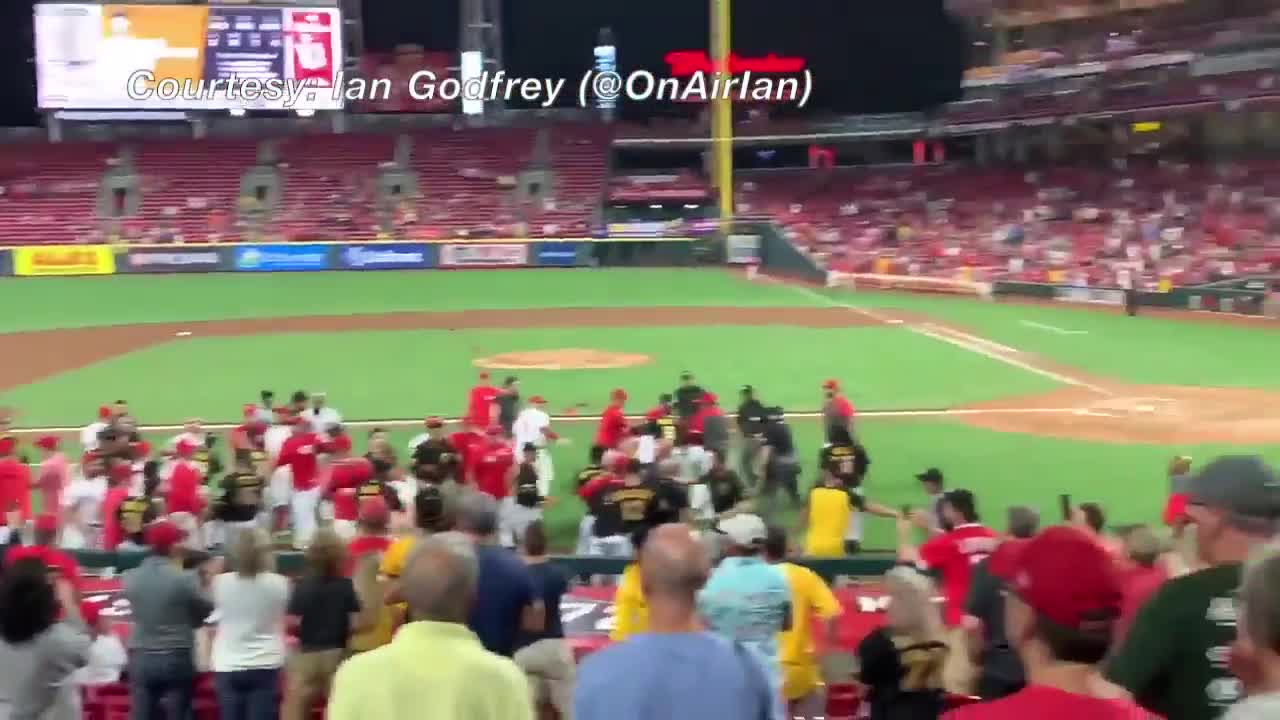 CINCINNATI — At the top of the eighth, it seemed like Yasiel Puig's just-reported trade to the Cleveland Indians would be the Reds story of Tuesday night. The right-fielder had been with the team for under a year and established himself as one of its most colorful personalities. During the start of the season, he became a living symbol of the Reds' new direction — one leaders hoped would reverse the tailspin of 2018.

And he was on his way out, scheduled to be replaced by the Indians' Trevor Bauer. It should have been the story. It was the story.

Garrett disappeared beneath a dogpile of Pirates within seconds, but the confrontation wasn't over. Manager David Bell, who had also been ejected, ran down from the clubhouse to join the fray. Puig stalked over, shouting at Pirate Kyle Crick as a third player restrained him.

Garrett and Puig would be ejected, the latter to a warm ovation; so were Williams, Crick and Chris Archer on the Pirates' side. The game resumed, rolling to an ignominious 11-4 defeat for the Reds.

The Reds and Pirates, NL Central rivals, have been going at each other for years. The nastiness resumed this season when Derek Dietrich admired his homer at PNC Park in April, touching off a fracas.

On Tuesday, Derek Dietrich got into the lopsided game late, and Keona Kela threw a fastball up-and-in that set off the Reds.

"I just wanted to show them that we didn't agree with the way things went down, and you have to pitch in," Kela said. "I was just going my part."

"Today was an example of us standing our ground for what we think is right," Votto said. "At some point, a group of players has to do that."

Both benches had been warned when Hughes plunked Marte, so the reliever and Reds bench coach Freddie Benavides were ejected. Garrett relieved and, during the inning, traded words with Pirates starter Trevor Williams, who was in the dugout.

Garrett ran from the mound toward the dugout and started swinging as players came onto the field. Garrett was upset over the up-and-in pitch to Dietrich.

"I definitely do think they teach that in that organization," Garrett said. "I don't think it's right to throw at somebody. That's not something you should do. If you have a problem, handle it like a man."

When the fight began, a livid Bell ran back onto the field and went after Hurdle, who got knocked to the ground in the scrum. Pirates hitting coach Rick Eckstein got Bell in a headlock. Bell yelled at Hurdle as he left the field.

"It's a shame that this is allowed and that they're able to get away with it," Bell said of the up-and-in pitch. "They celebrate it, they support it, they clearly allow it. I don't know if they teach it, but they allow it. It's dangerous."

Puig was also at the center of the memorable fight that followed Dietrich's homer in April, taking on nearly the entire Pirates team at one point — a striking image with Pittsburgh sporting bright yellow throwback uniforms.