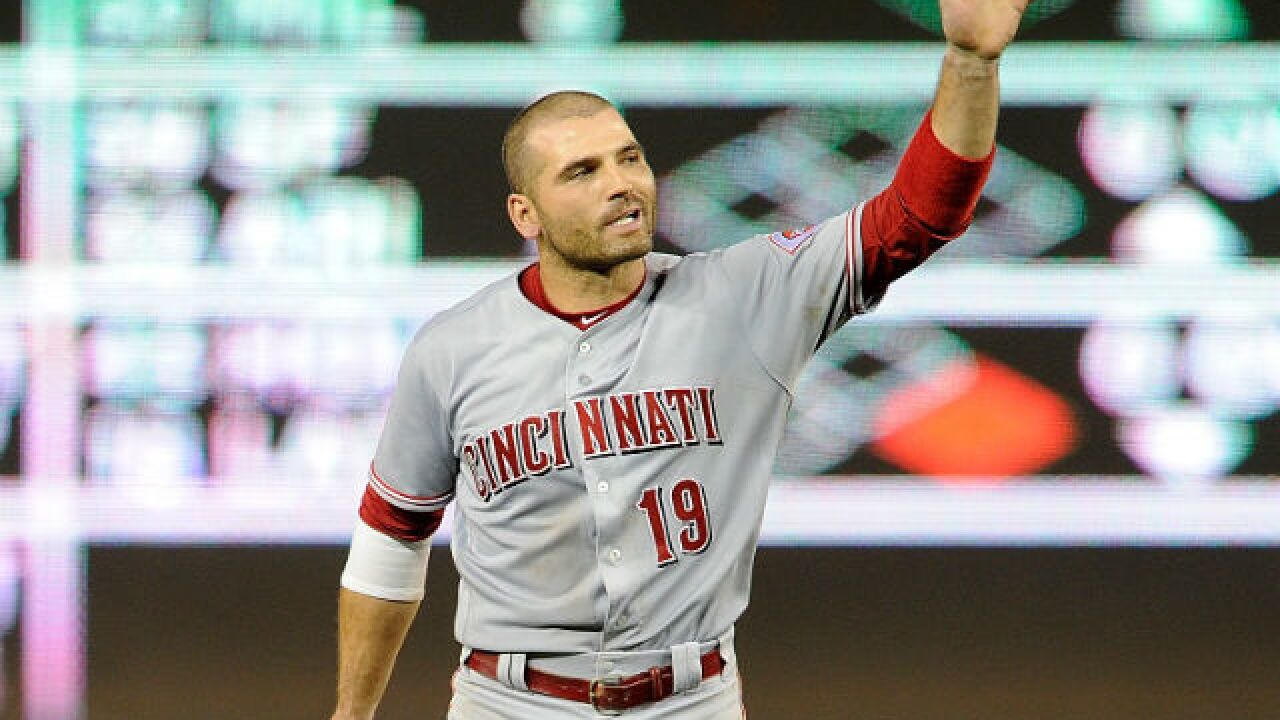 Image copyright 2018 Getty Images. All rights reserved. This material may not be published, broadcast, rewritten, or redistributed.
<p>WASHINGTON, DC - AUGUST 04: Joey Votto #19 of the Cincinnati Reds gesttures towards the Washington Nationals dugout after being hit with a pitch for the second time in the game at Nationals Park on August 4, 2018 in Washington, DC. (Photo by Greg Fiume/Getty Images)</p>

WASHINGTON  -- Nationals slugger Bryce Harper got hit by a pitch and soon left the field. Then Reds star Joey Votto got hit and immediately went off - on the Nats.

The second game of a doubleheader turned testy Saturday night after a pair of former NL MVPs got plunked during Washington's 6-2 win for a split.

In the sixth inning, Harper was hit in the right kneecap by Austin Brice. Harper initially struggled to put any weight on his leg, but ultimately made his way to first base.

But Harper labored defensively chasing after a double by Mason Williams in the seventh and was immediately replaced in right field by Adam Eaton.

In the eighth, Votto was hit for the second time in the game, nailed in the leg by Ryan Madson's first pitch.

Votto gestured at Madson as he took first base. After being retired on a forceout at second to end the inning, Votto waved at Washington's dugout, prompting plate umpire Andy Fletcher to warn both teams.

Cincinnati interim manager Jim Riggleman said the Madson pitch ''certainly appeared (intentional). The only person who knows is the person who threw the pitch.''

That person says the Reds had the wrong read.

Votto, who also was hit in the first inning, remained in the game and didn't address Madson's plunking until the teams came back to the ballpark Sunday morning.

Asked Sunday morning if Madson’s pitch was intentional, Votto responded: “I have no idea. My reaction kind of falls in line with that. I reacted. I had no idea at the time when I reacted, and I still don’t now.”

Washington's Spencer Kieboom was hit by a pitch in the seventh inning.

The Reds won a tame opener 7-1 before tempers flared.

Anthony Rendon had a pair of RBI doubles and Matt Adams homered in the second game for Washington.

Jose Peraza led off the game with a homer for Cincinnati and Eugenio Suarez hit his 26th home run.

The Nationals scored single runs in each of the opening five innings against Matt Harvey (5-7).

''It was kind of a battle from beginning,'' Harvey said. ''It's never good when you give up a run every inning. It's obviously not ideal.''

Jeremy Hellickson (5-2) pitched into the sixth. The Nationals have won four of five.

Reds pitcher Jesus Reyes made his major league debut in the bottom of the seventh. He hit Kieboom, the first batter faced, with a pitch before settling down for two innings of scoreless relief.

Reds: Brice was recalled from Triple-A Louisville to serve as the 26th man for the second game. He replaced Harvey in the fifth, hit Harper with a pitch and allowed one run in two innings.

Nationals: Pitcher Stephen Strasburg, put on the 10-day DL retroactive to July 22, is eligible to return, but when he will remains unclear. ''Every day, he's progressing. There's no real timeline right now,'' manager Davey Martinez said. ''Hopefully, he's feeling good enough in the next week or so he can get off the mound, throw a bullpen. We'll see. He's definitely progressing in that direction.''