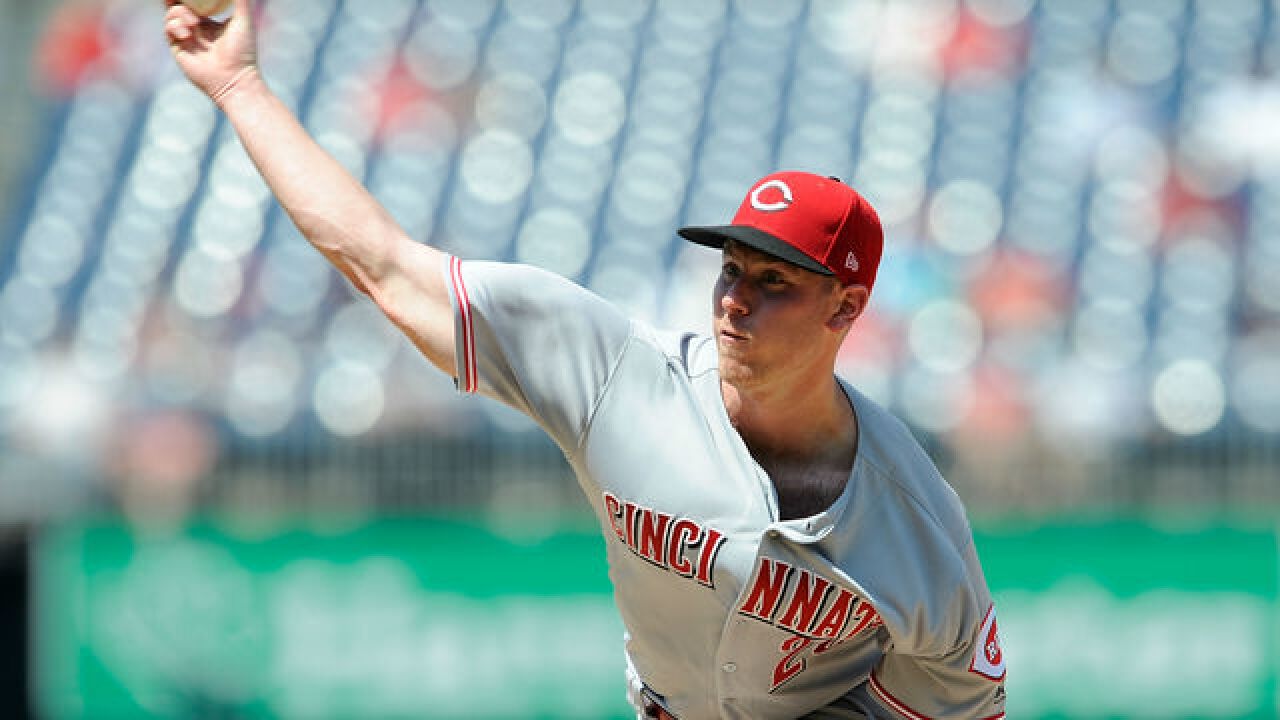 Image copyright 2018 Getty Images. All rights reserved. This material may not be published, broadcast, rewritten, or redistributed.
<p>WASHINGTON, DC - AUGUST 04: Anthony DeSclafani #28 of the Cincinnati Reds pitches in the fifth inning against the Washington Nationals during game one of a doubleheader at Nationals Park on August 4, 2018 in Washington, DC. (Photo by Greg Fiume/Getty Images)</p>

DeSclafani (5-3) held the Nationals to just one run and six hits in seven innings to earn a 7-1 victory, ending the Reds' three-game losing streak as well as Washington’s three-game winning streak.

“I’m never going to complain when you go seven innings and one run,” DeSclafani said after his longest outing of the season. “I’m just glad the team got the win. It felt good to finally get through the seventh inning.”

The Reds supported DeSclafani with 13 hits, most notably Phillip Ervin's three-run homer in the second inning. Brandon Dixon had a solo homer.

DeSclafani also had a hit and scored a run.

“Anthony was really good," Reds interim manager Jim Riggleman said. "We swung the bats good. Good at-bats, didn’t go out of the zone too much after pitches. ... A really clean ballgame. Kind of a complete turnaround from the games in Detroit.”

Washington lefty Gio Gonzalez (8-8) continued his struggles. The Reds hammered Gonzalez for six runs and 10 hits in 3 2/3 innings. Gonzalez has lost seven straight decisions while his ERA has ballooned from 2.10 to 4.04.

“If I knew the answer to that, it’d be a different outcome,” Gonzalez said of his struggles. “Right now, I’m just trying to battle through whatever I’m going through. Hopefully start catching my breaks. Tide will change.”

Jose Peraza had three hits for the Reds, who lost Thursday’s series opener after dropping two games at Detroit.

Ervin tacked on Cincinnati’s final run with a sacrifice fly and Dixon added an RBI groundout.

A Saturday doubleheader was necessary because Friday’s game was postponed due to rain. Washington won the nightcap  6-2.

The Reds' first four batters reached base with three singles and a walk, but the Reds only managed one run in the first. They were far more efficient in the second.

With a runner on first and two outs, Peraza singled and Ervin hit his first homer of the season for a 4-0 lead.

The Reds added runs in each of the next two innings on Dixon’s homer and a two-out RBI single from Eugenio Suarez, which chased Gonzalez.

“(The Reds) swung the bats right from the first inning,” Nationals manager Davey Martinez said. “We fell behind early, just couldn’t come back.”

Nationals pitcher Stephen Strasburg, put on the 10-day DL retroactive to July 22, is eligible to return, but when he will remains unclear. “Every day, he’s progressing. There’s no real timeline right now,” Martinez said. “Hopefully, he’s feeling good enough in the next week or so he can get off the mound, throw a bullpen. We’ll see. He’s definitely progressing in that direction.”

Reds: RHP Austin Brice was recalled from Triple-A Louisville to serve as the 26th man for the second game. Brice is 2-2 with a 5.66 ERA in 31 games with Cincinnati this season.

Nationals: Washington added reliever Austin Voth from Triple-A Syracuse as its 26th player. The right-hander allowed seven runs in 4 1/3 innings against the Mets on July 14 in his first major league start.