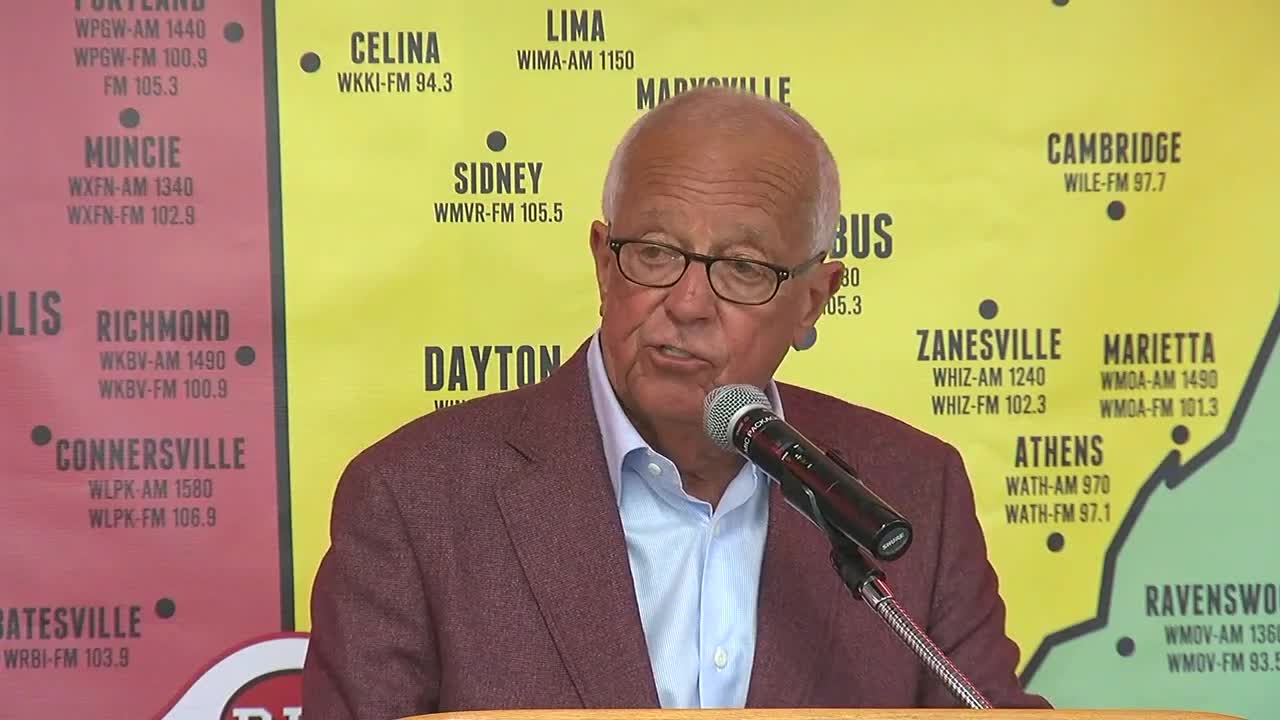 Baseball Hall of Fame broadcaster Marty Brennaman announced Wednesday that he will retire after the 2019 season - his 46th behind the Reds mic. 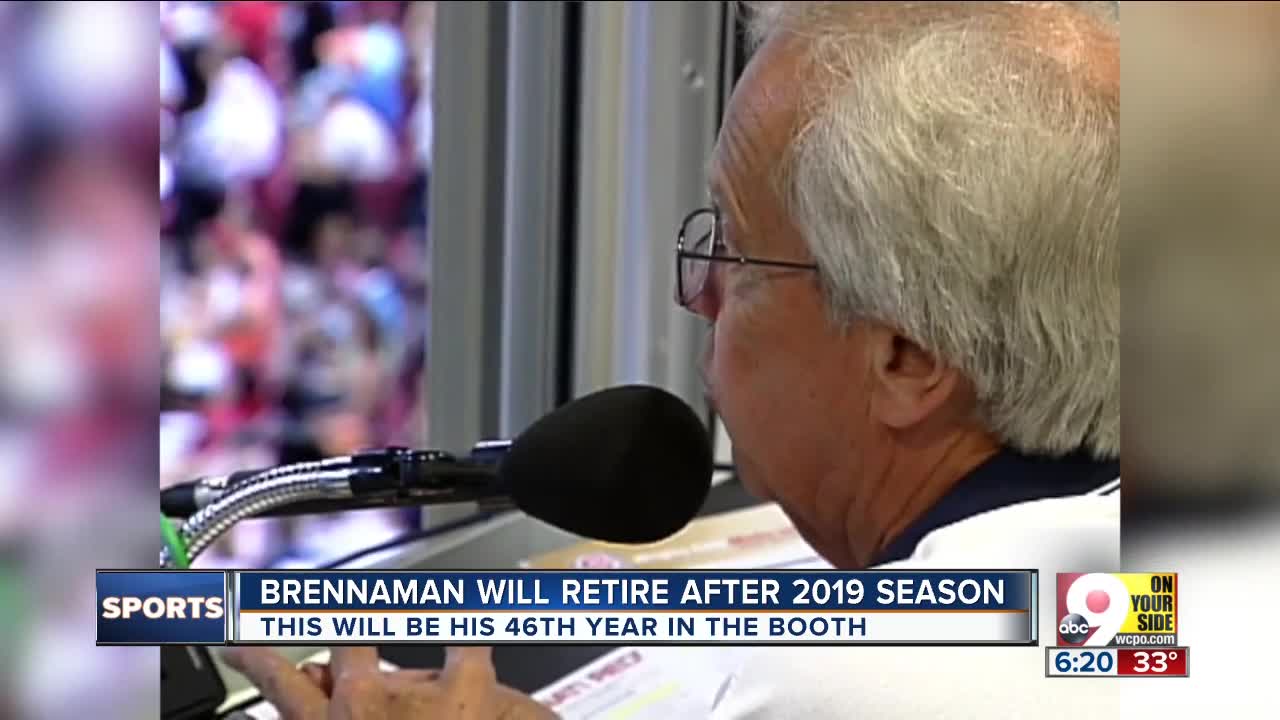 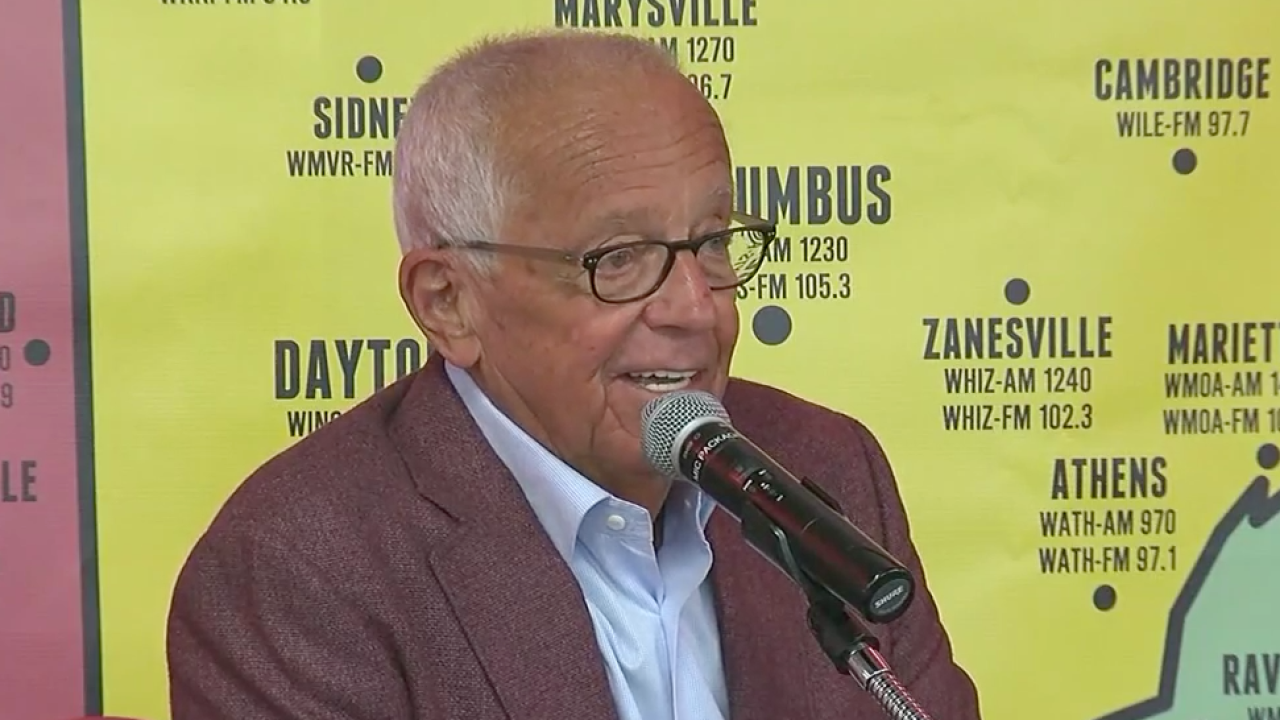 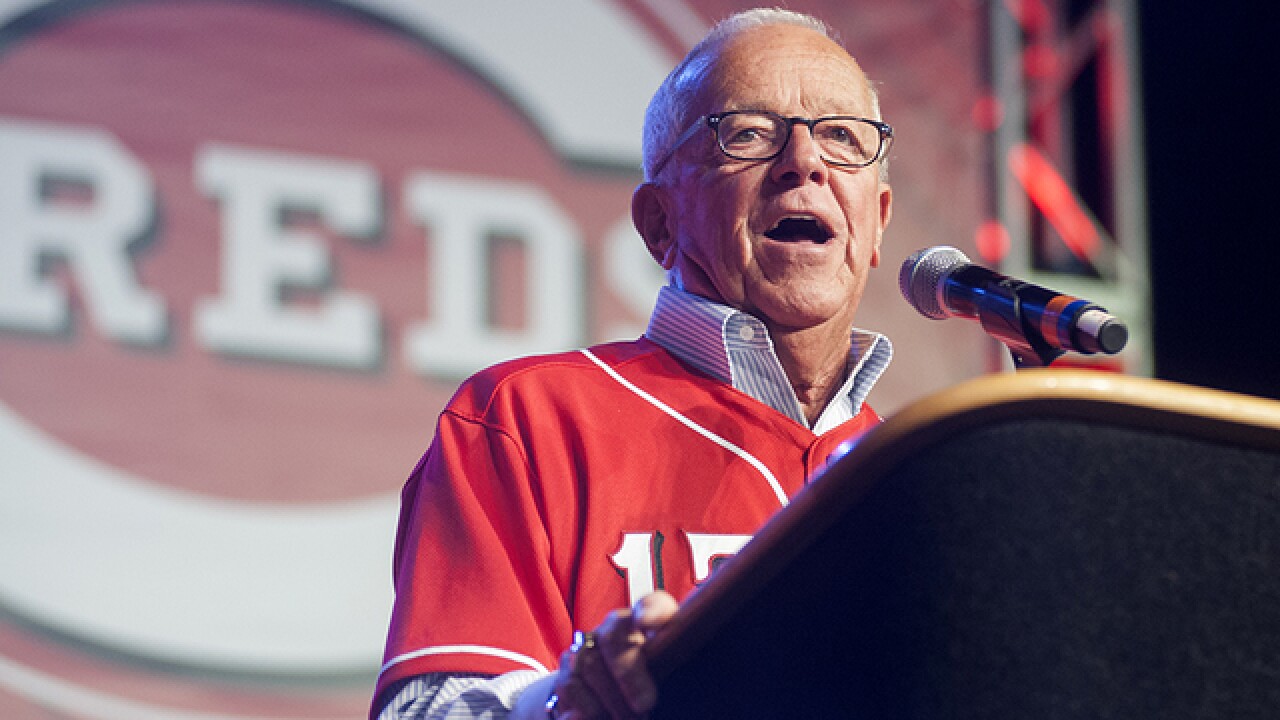 CINCINNATI — Hall of Fame broadcaster Marty Brennaman admitted there is crying in baseball after all Wednesday, when he announced his plans to retire after the 2019 season.

Brennaman, 76 and preparing to enter his 46th season as the voice of the Reds, said he cried several times in the hours before his afternoon news conference. That reminded him of the late Joe Nuxhall, his dear friend and joined-at-the-hip broadcasting partner, and Johnny Bench's last game.

WATCH Brennaman's news conference in the video player above.

It was September 1983 and the Reds were celebrating the catcher's great career on Johnny Bench Night at Riverfront Stadium. Bench hit a home run, raising his fist as he circled the bases and sending a sellout crowd into a frenzy. Brennaman remembered Nuxhall making the call: "It's a line-drive home run to left." Then, he said, Nuxhall literally cried into the mic.

"Of all things I learned from Joe Nuxhall in 31 years, the one thing I learned was there's nothing wrong with crying, and it's masculine to cry," Brennaman said.

He also learned something from the way Bench left the game.

After that homer on Johnny Bench Night, the Hall of Famer took off his uniform, left the ballpark and never played another game.

Brennaman said he thought of Bench's quiet farewell to baseball when he considered how he wanted to end his 55-year career in broadcasting. He planned to keep it secret, asking the Reds only to issue a statement after the last game of the season so he could avoid a farewell tour of ballparks. He said Reds COO Phil Castellini convinced him it wasn't fair to the fans.

Brennaman called Wednesday one of his most difficult days.

Brennaman said he talked with Scully, the legendary Dodgers broadcaster, about retiring a few years ago. Scully was 88 when he quit in 2016. Like Scully, Brennaman said he just decided the time was right and to go while he is still healthy.

"I may wake up in three months and think I made a terrible mistake," Brennaman said. "I think about Johnny Bench."

Brennaman opened his heart and his memory book from 45 years of broadcasting some of the greatest moments in Reds baseball, starting with a videotaped announcement on Twitter in which he tearfully thanked the fans, saying they're at the top of the list of things he will miss.

"To say it's been an incredible ride, that's what it's been," he said, his voice cracking.

A message from Marty Brennaman: pic.twitter.com/c66DFmyjQS

"You folks have had a lot to do it with," he added, speaking to Reds fans. "You accepted me as one of your own many years ago back in 1974. I feel like I've had a love affair that has gone through 4 1/2 decades because you all have been so good to me.

"Nobody can love you as much as I do. I'm going to miss a lot of things, but you folks are going to be right there at the top of the list. Thank you very much."

Another personal favorite was his very first Reds broadcast on Opening Day 1974 when Hank Aaron homered to tie Babe Ruth's career record of 714. Brennaman said Nuxhall turned to him after the inning with a question.

"What the heck do you do for an encore?" he repeated Nuxhall.

Reds fans will always think of "Marty and Joe" — no last names required — when they think of Reds baseball.

Brennaman and Nuxhall were like peanut butter and jelly. They shared the Reds radio booth for 31 years and clearly had a "special" relationship, Brennaman said.

"The fact that he and I were together for 31 years equals the longest any broadcast duo has done major-league baseball," Brennaman said.

"I learned a lot from him about the game and just how to carry yourself, in his case, as one of the most beloved people to ever come out of this area.

"We were so connected," he said, that letters would arrive at the post office marked "Marty and Joe, Cincinnati, Ohio" and be sent right to the ballpark.

Brennaman recalled playing golf with Nuxhall a few days before he died on Nov. 15, 2007.

"We were never so emotional with each other that we'd tell each other how much we thought of one another," Brennaman said. "The last time I was with him was at Kenwood Country Club and he was not well.

"A couple of guys had won the right to play golf with us ... He was not strong enough to play 18 holes. He'd ride around in the cart and every two or three holes he'd hit a golf ball, but he dazzled those guys with stories about the game.

"We're sitting on the 14th tee box and he said to me, 'We really had a good time together, didn't we?'

"It was so out of character for him and all I could say was, 'Yeah, we really did.' And then four days later he died.

"I really believe that he had a premonition that day was going to be the last time we'd ever see one another," Brennaman said. "He was special. I was thrilled just to call him my friend."

Over their years together, Marty and Joe developed their own signature sign-offs. Nuxhall would say he's "rounding third and heading for home," words set in lights outside Great American Ball Park. Brennaman would end each win by declaring that "this one belongs to the Reds."

Now, it's Brennaman who's rounding third and heading for home.

Brennaman said he would maintain an association with the Reds and continue his golf tournament, the CBTS Marty Brennaman Golf Classic, which raises money for the Reds Community Fund. For now, he said his retirement plans include traveling in Europe with his wife, Amanda. He didn't expect to enjoy it when they visited for two weeks in October 2018, but he was amazed, he said.

"That was an unforgettable trip. I'd go back to Italy tomorrow," he said.

Brennaman said the full impact of retirement may not hit him "until one year from now when everybody's packing up and getting ready to go to Arizona, because nobody loves spring training more than I do ... Nobody enjoys broadcasting baseball more than I do," he said.

Marty is the Mel Allen of multiple generations. “The” consummate baseball play by play man. He is a mix of straight talk Red Barber and the entertainment of Bob Prince. Cincinnati you will never as in ever hear another like him again @700wlw

Brennaman, who is going into his 14th season with former Reds pitcher Jeff Brantley in the booth, will leave a living legacy in the form of his son, Thom, also a Reds broadcaster.

Brennaman has always been blunt and direct on the air, not afraid to criticize players, umpires, managers and the front office when he felt they had it coming. Once, in 1988, it got him into trouble.

I've said it before and I'll say it again. The only people I've listened to longer than Marty Brennaman are my mom and dad.

Brennaman and Nuxhall were called on the carpet by Commissioner Peter Ueberroth after Rose, then Reds manager, shoved umpire Dave Pallone while protesting a call at first base and was ejected. Ueberroth and National League President Bart Giamatti accused the broadcasters of inciting an ugly reaction from Riverfront Stadium crowd, which threw transistor radios, cigarette lighters and other debris on the field. Brennaman and Nuxhall apologized in that 90-minute New York meeting, while Rose got a 30-game suspension.

''There were some things that we said, in retrospect, that were extremely inappropriate,'' Brennaman said at time. ''In my case, some of the things I said were embarrassing to hear."

2005: Inducted into the National Sportscasters and Sportswriters Association Hall of Fame in Salisbury, NC.

2005: Inducted into the National Radio Hall of Fame in Chicago.

2009: Selected by the American Sportscasters Association as one of the Top 50 broadcasters of all time.

The Associated Press contributed to this story.