On the oddest of Opening Days, Reds show potential 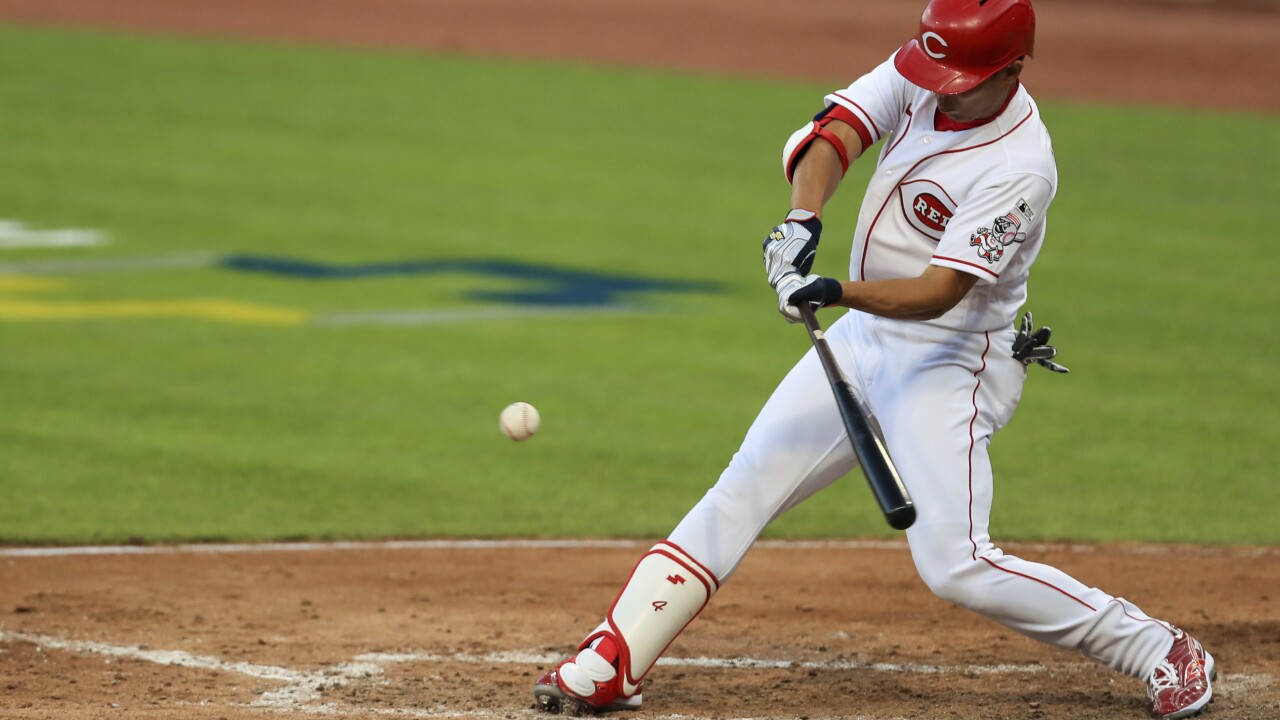 CINCINNATI – Mike Moustakas’ two-run home run in the seventh inning on Friday night normally would have landed in a sea of red-clad Opening Day revelers in right field. Instead, it cleared the advertising banners draped over sections of empty seats and landed with no one around to claim the souvenir.

As Moustakas rounded the bases, the ribbon boards flashed and fireworks boomed over Great American Ball Park as they normally would following a Reds home run, but the new Reds second baseman didn’t hear the roar of a sellout crowd. He only heard the cheers from teammates in the home dugout, and some applause from nearby grounds crew members.

Moustakas went 3-for-4 with a home run and four RBIs, leading the Reds to a 7-1 win over the Detroit Tigers in a game unlike any other Opening Day in Reds franchise history.

The seats were empty on Friday and the concourses were barren. Outside the ballpark there was very little of the pomp and circumstance which normally surrounds baseball’s most traditional season-opener, including the thousands of people who normally would line downtown streets for the Findlay Market Parade

But just as everyday life hasn’t been normal throughout the Covid-19 global pandemic, neither will this baseball season.

The abbreviated 60-game regular-season schedule will be played without fans in the stands, at least to start. But as Reds manager David Bell said prior to Friday’s opener, the teams feel fortunate to be playing at all.

“We’ve all been challenged by so many things,” Bell said. “We accept that we are very grateful for being here.”

With the season starting in July, it was not surprisingly the hottest Opening Day game in Reds history with a game-time temperature of 89 degrees, bettering the 1896 opener which was played in 86-degree heat.

The Reds tried to keep things as normal as possible inside the ballpark. Reds public address announcer Joe Zerhusen’s voice echoed in the cavernous ballpark as he barked out the lineups. Foul balls clanked off the metal seats, souvenirs for no one.

While the atmosphere in the stadium seemed odd, the team’s performance was in keeping with their lofty expectations for the season.

Moustakas delivered an RBI single in the third to drive home Castellanos, who had doubled. He also contributed with the glove at second base with a diving stop to his right to retire Cameron Maybin in the fifth.

Akiyama made his Reds and major-league debut as a pinch-hitter in the sixth and collected his first hit and RBI. He also made a leaping catch against the left field wall in the eighth.

Joey Votto added a solo home run leading off the fifth inning, which caromed off the Tide advertisement banner in right field.

The Reds pitching staff, thought to be among the National League’s best, lived up to its billing with starter Sonny Gray striking out nine, including the 1,000th strikeout of his career. Reds pitchers combined for 13 strikeouts on the night.

“Through all this, the only thing we have is each other,” Gray said of dealing with the unorthodox environment. “That’s all we have. It’s made us incredibly close.”

The Reds’ first run of Friday’s game scored after two straight batters were hit by pitches, adding to the strangeness of the night.

Outside Great American Ball Park, fans did their best to ramp up the Opening Day festivities by flocking to nearby bars and restaurants at the Banks.

Before the game, a line of cars adorned with red balloons and banners rolled down Joe Nuxhall Way, doing their best to mimic the traditional Opening Day parade.

For Bell, who is beginning his second season as Reds manager, there were the same pregame butterflies he typically would experience on Opening Day, perhaps more so this year. He attributes that to the expectations surrounding this year’s team.

“It was an excitement," Bell said. "Usually like when you have an opportunity in front of you.”

Over the past three weeks, the club has been training and playing intra-squad games and a couple of exhibitions against the Tigers in Great American Ball Park with no fans in the seats. But Friday was different. This game counted.

“I think it was right after batting practice when we had our advanced meetings that we really started to lock it in,” Moustakas said. “At the end of the day, we’re playing major league baseball and it’s awesome to be back out there. Winning is incredibly hard. You should celebrate every win.”

In the middle of the seventh inning, "Take Me Out to the Ballgame" was played, with nary a note sung. After the last out, the sky lit up with fireworks, helping make things feel only a bit more normal.

“For everyone, I’m sure it’s different,” Bell said. “But that’s what we’re faced with. It’s a little bit weird. But the team we have is making it so enjoyable. The team that can block those things out and focus the best (has an advantage), maybe this year more than any time. That’s our goal. That’s our challenge. So far so good.”