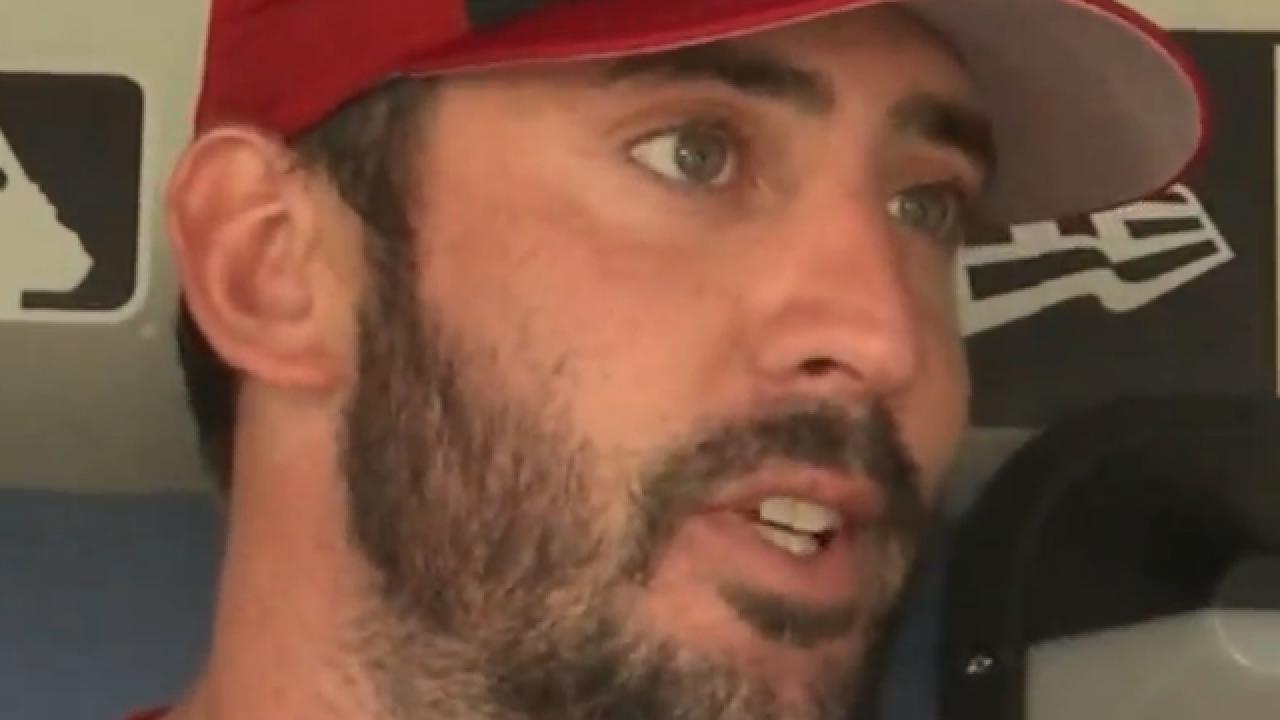 FOX Sports Ohio
<p>Matt Harvey talks to media in the Reds dugout in Los Angeles after joining the team Thursday.</p>

LOS ANGELES - The Reds aren't wasting any time showing off their new acquisition. And Matt Harvey is eager to show what he can do.

The former Mets ace will start for Cincinnati on Friday night in the second game of their series against the Dodgers. The Reds optioned struggling left-hander Brandon Finnegan (0-3, 7.40 ERA) to Triple-A Louisville to make room on the roster.

Interim manager Jim Riggleman says Harvey could pitch a couple innings or the right-hander could go four, but he will be limited because of his lack of recent game competition.

“He’s healthy and ready to go, so we’ll just put him out there,” Riggleman said.

Harvey was in Newport Beach working out at a facility owned by his agent Scott Boras and made the drive up to Dodger Stadium to join his new team on Thursday.

“I’m excited to help this team any way I can and I’m excited to get the ball,” Harvey said in the visitors’ dugout after working out on the field.

Harvey, who slid to a 9-19 record over the last three seasons, says he's eager to start a new chapter with the last-place Reds, who acquired him from New York for catcher Devin Mesoraco on Tuesday.

"I obviously wasn’t able to perform the way I wanted to and the way I was expecting to. So, you know, fresh start, I guess you could say, is a nice thing. I’m looking forward to my opportunity,” Harvey said.

Harvey says he endured some dark days in recent years as he struggled with injuries and tried to recover the All-Star form he had in 2013. Now he's ready to put his Mets days behind him.

Reds General Manager Dick Williams had said the Reds checked into Harvey’s off-field conduct, which included being suspended for three days without pay last year for skipping a game following a late night on the town.

“I’m not going to discuss any of that stuff,” Harvey said. “I think a lot of things get blown out of proportion.”

Riggleman met Harvey in his office for a conversation that included Harvey asking about team rules.

“Very respectful, professional,” Riggleman said of his impression. “He’s been in the game for a while now. He’s seen and done it all. He knows how to conduct himself.”

Harvey is staking his big league future on a fresh start. Last year, he was 5-7 with a 6.70 ERA and was sidelined from mid-June until September because of an injury to the scapula in his right shoulder.

“I feel great. I told the Mets that each time I was going out. Obviously, the numbers didn’t show that,” he said.

Harvey is 0-2 with a 7.00 ERA this season, including four starts and four relief appearances.

“I was feeling like I was getting much closer and closer to where I wanted to be on the mound," Harvey said.  "I might have over-pressured myself and wasn’t able to enjoy the game and let it kind of fall into place and work on just pitching and getting people out.”

The 29-year-old Harvey was designated for assignment on Saturday, giving the Mets seven days to trade or release him when he refused a demotion to the minors.

Clearly, the Reds aren’t looking at Harvey a savior to bail out the team or their rotation.

“He’s like everybody else on the team and has to do his job,” first baseman Joey Votto said. “He has to try to get better every day. I wish him well.”