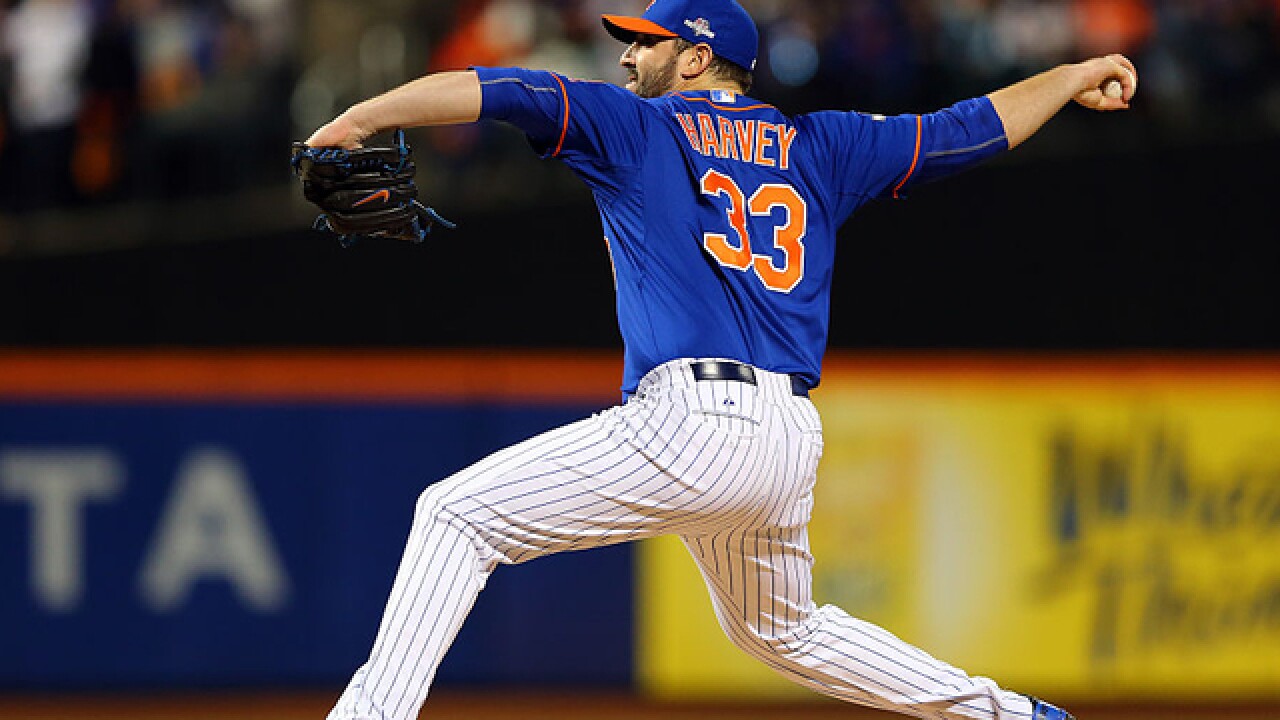 Copyright 2018 Scripps Media, Inc. All rights reserved. This material may not be published, broadcast, rewritten, or redistributed.
Elsa
<p>Matt Harvey of the New York Mets throws a pitch in the first inning against the Chicago Cubs during game one of the 2015 MLB National League Championship Series at Citi Field on Oct. 17, 2015, in New York City. (Photo by Elsa/Getty Images)</p>

CINCINNATI -- It was among the most bizarre nights in Great American Ball Park history. At the end of the day, former right-handed ace pitcher Matt Harvey, aka the "Dark Knight," was wearing red.

Catcher Devin Mesoraco began Tuesday night in the Cincinnati Reds' starting lineup. He ended the night pinch-hitting in the top of the ninth inning for the New York Mets, who acquired him from the Reds hours earlier in exchange for Harvey.

"We wanted to help our pitching depth, and we felt he could be a candidate," Reds general manager Dick Williams said. "We would like to consider him as a starting option."

In an unexpected turn of events, Harvey and Mesoraco -- both former All-Star players in whom their teams had made significant investments -- were swapped for each other on a night when the Mets and Reds were playing the second game of a three-game set.

The novelty of Mesoraco packing up his locker and relocating to the visitors' dugout aside, it's really no surprise that he was traded.

Mesoraco signed a four-year contract in 2015 after becoming the only Reds catcher not named Johnny Bench to produce 25 home runs and 80 RBIs in a season.

The popular adage is that you can't lose your starting spot due to an injury, but that's exactly what happened to him. While Mesoraco was rehabbing, Tucker Barnhart developed into one of baseball's best backstops and put a stranglehold on the position.

Acquiring Mesoraco made sense for the Mets after Travis d'Arnaud and Kevin Plawecki got injured and other options didn't work out. Mesoraco gives the Mets depth behind the plate and a power bat, although he will turn 30 in June after missing some prime years with the injuries.

"We know he's not going to catch every day, but we know he's a guy who can play a couple times a week," said J.P. Ricciardi, special assistant to Mets general manager Sandy Alderson. "We talked with Todd (Frazier) and (Jay) Bruce, and they both said nothing but good things. Just another quality guy to bring into the clubhouse and helps us out at a position we've been struggling with, with the injuries."

Which brings us to Harvey and the Reds.

Harvey was designated for assignment by the Mets earlier this week after his earned run average ballooned to 7.00 through eight appearances. Not even a move to the bullpen helped ease his decline. Since he started the first game of the 2015 World Series, Harvey's ERA rose from 2.71 to 4.86 in 2016 and then to 6.70 last season.

Harvey missed the 2014 season following Tommy John surgery but came back better than ever. Of more immediate concern is his surgery in July 2016 for thoracic outlet syndrome, a disorder that occurs when the blood vessels or nerves in between the collarbone and first rib are compressed. Harvey hasn't been the same since.

However, Williams said Reds scouts were encouraged by what they saw from Harvey, and the reports leading up to the trade were positive.

"Suffice to say they were optimistic," Williams said. "They thought there were things we could tweak. It's not like the stuff has disappeared. We really like the change-up. The velocity has been good."

The velocity might be good, but it's not what it was. The question for the Reds isn't if they can resurrect the 2015 version of Harvey. It's if they can develop a serviceable 2018 version, one that can help stabilize the Reds' young pitching staff and possibly help them win a few games after their historically bad 10-27 start.

"It may be more of a pitches mix and approach than a big mechanical change," Williams said of how the team plans to "fix" things.

Harvey threw a bullpen on Tuesday and is expected to join the club in Los Angeles, where they begin a four-game series on Thursday at Dodger Stadium. Reds manager Jim Riggleman indicated on Wednesday that Harvey could pitch in the Dodgers series, either as a starter or in relief.

Harvey last appeared in a game on May 3, when he allowed five earned runs, walked three and gave up a homer in two innings of an 11-0 loss to the Atlanta Braves. He has given up six home runs in 27 innings this season, and he now calls homer-haven Great American Ball Park home.

"When he became available from the Mets, we were all getting interested," Riggleman said. "We just wanted to be in the mix. We've seen what he can do. It was a nice surprise when I saw we were getting him."

Tuesday's deal is low-risk for both teams, which reportedly are paying the remaining contracts of both players, making it something of a wash financially.

​Where does Harvey fit within the Reds' rebuilding plans, which have been centered around the acquisition and development of young pitching? Homer Bailey is the old head on the staff at 32, and the rest are guys who are still finding their footing in the major leagues.

No doubt a veteran presence like Harvey -- if he's effective on the mound -- could give the rotation a boost and take some pressure off the bullpen and young arms.