He didn't cave to pressure from baseball greats or Reds management 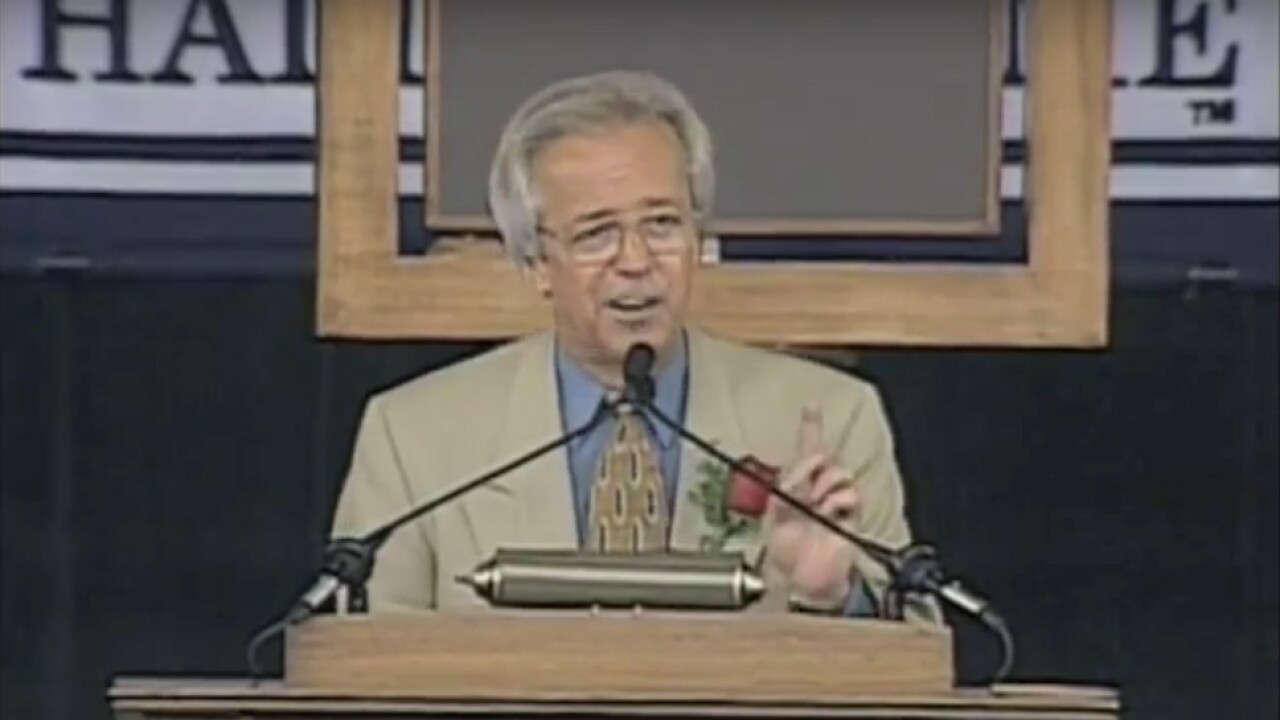 Marty Brennaman speaks at the Baseball Hall of Fame ceremonies in 2000.

CINCINNATI - No one was going to tell Marty Brennaman what he could or could not say – not on the Reds radio broadcasts and especially not on his date with immortality in Cooperstown, New York, in 2000.

When Brennaman walked onto the outdoor stage for the Baseball Hall of Fame induction ceremonies, he looked up and saw the former Reds general manager who had threatened to fire him for his openness and candor, and two Hall of Fame greats who said they might walk out if Brennaman so much as uttered the name of Pete Rose in his speech.

Brennaman said Johnny Bench had told him the night before the ceremonies that Bob Feller and Ralph Kiner didn’t approve of his plan to include words of support for Rose, who was banned from baseball in 1989 for betting on the Reds and was still proclaiming his innocence.

In those days, honorees didn’t get to select who would introduce them, and Baseball had picked Kiner, the Mets broadcaster, to introduce Brennaman.

So there was drama and tension in the moment, like watching a pitcher trying to close a no-hitter with two outs in the ninth inning, when Brennaman stepped to the podium. There were dozens of Hall of Famers sitting to his right, and a crowd of 25,000 – including his family – gathered on the grounds in front of him.

It just so happened that two of the all-time favorite Reds - Tony Perez and Sparky Anderson – were being inducted to the Hall in the same ceremonies that sunny Sunday afternoon in July. That brought an army of fans from Cincinnati and promised to be a day that would belong to the Reds.

Many of the Rose fans had already chanted “We Want Pete” and were waiting to hear what Brennaman would say.

Was Brennaman really going to risk causing a scene – one that might overshadow the memory of the crowning moment of his career?

Or would he surrender to the moment?

What do you think?

Here was a broadcaster who never spared players, managers and management from the criticism they deserved. And it almost got him fired in Cincinnati at least once. But just as Brennaman never wavered in calling Reds games as he saw them, he didn’t change a word in his speech.

When he came around to mentioning others from the Big Red Machine who should be inducted in the Hall, Brennaman called out the names of Bob Howsam, the former GM who built that team as well as championship teams with the Cardinals, and Davey Concepion, calling him the “pre-eminent shortstop of his time.”

Then Brennaman paused for effect and said:

WATCH Brennaman's comments on Big Red Machiners in and missing from the Hall (1:04 clip):

Just seven words, but enough to bring loud cheers from the Reds fans.

Brennaman immediately went on with his speech, and no one walked off the stage.

“I can’t be intimidated,” he said afterward.

It helped, Brennaman said, that he got reassurance from Joe Morgan the night before.

“He was concerned for me,” Brennaman said. “I repeated to him what I was going to say and he said, ‘I’ve said worse than that.’ ”

In that moment, Brennaman showed the same honesty and integrity that earned him the honorary titles of “the Hall of Famer,” as his recent radio partner Jeff Brantley calls him, and "Mr. Hall of Fame Announcer," as his wife Amanda refers to him in a commercial.

They're the same qualities that made him a popular figure in Reds history now and for long after his last broadcast on Thursday.

The Road To Cooperstown

Other sports legends retire, then go into the Hall of Fame. Brennaman took a roundabout.

Going into his 27th year with the Reds, a panel of baseball broadcasters had voted him winner of the Ford C. Frick Award in 2000 for "major contributions to baseball broadcasting." That won him a framed scroll and a place of honor in the "Scribes & Mikemen" exhibit in the Hall of Fame library.

It's not the same as a player or manager being inducted or enshrined and having his plaque and bust on display in the main Hall, but it's the next best thing and it gets a worthy broadcaster the thrill of a lifetime.

Oddly, Brennaman had never been to Cooperstown before the weekend he was honored. The Reds had been scheduled to play an exhibition game there before Bench’s induction in 1989, but they had plane trouble as they attempted to land in Montreal, and the game was called off.

Brennaman arrived in the small, postcard village in upstate New York two days before the ceremonies, checked in at the Otesaga Resort Hotel where baseball royalty stayed, and started mingling with the Hall of Famers. He was immediately starstruck.

“This is like nirvana. It doesn’t get any better than this,” he said.

He said when he boarded the bus taking baseball’s greats to the Sunday ceremonies, he had an "oh-oh" moment.

“I didn’t feel like I really belonged there,” Brennaman said.

He admitted he was nervous backstage, but he said Tom Seaver helped calm him down.

“He said, ‘You go out there and say whatever you want to say. You deserve to be up here. You’ll be fine,’” Brennaman said.

Once he got to the mic, Brennaman was comfortable again in his own skin. He started by thanking Al Michaels for leaving the Reds' play-by-play job after the 1973 season.

“Had Al not left to go to the San Francisco Giants, I wouldn't be here today," Brennaman said.

Brennaman was just starting to poke fun at himself.

He mentioned that he been a terrible player in Little League and chuckled at the memory of a fly ball that went over his head in right field, saying he never saw it because he had been talking to his “two girlfriends” instead of paying attention to the game.

"Girls were more important to me back then," Brennaman said, "and I was on the bench the next day."

He said his first choice for a career was acting, but when he was in a high school play he fell off the stage during a performance and wound up in the orchestra pit.

He thanked Howsam and his assistant GM at the time, Dick Wagner, for hiring him. After succeeding Howsam, Wagner would become the most hated man in town for firing Anderson and letting Rose leave in free agency.

How Brennaman Came To The Reds And Almost Left

When the Reds were looking for a successor to Michaels, Brennaman was broadcasting games for the Class AAA Tidewater Tides in Virginia and was one of 211 candidates for the Reds job. Talking to reporters in the buildup to the Hall of Fame ceremonies, he said he was making $29,000 in Tidewater and the Reds offered him $30,000.

“I think one of the main things I had going for me was, I was willing to work cheap,” he said.

After Howsam retired following the World Series championships in 1975 and ’76, Wagner and Brennaman clashed over Brennaman’s on-air criticisms.

“If Dick had not been fired , in July of 1983, I think ’83 would have been my last year with the Reds because I don’t think he had any intention of bringing me back in 1984,” Brennaman said before the ceremonies.

Instead, Howsam was hired back and saved the floundering franchise by returning Rose as player-manager that year, and you know the rest. Brennaman’s position was secure.

Brennaman and Wagner made their peace after Wagner was in a near-fatal car accident in 1999. Brennaman visited Wagner when was convalescing at his Arizona home.

That brought Wagner to Cooperstown for Brennaman’s shining moment.

“Marty was a tough cookie to handle,” Wagner said after the ceremonies. “Radio was very important to the Cincinnati market, and I felt like I needed to oversee it the same way an editor oversees a writer. But that’s water under the dam.”

Back To Marty’s Speech

Brennaman thanked the Big Red Machine stars, all of the managers and coaches he worked with and “all the players over the last 27 years, even the guys who didn’t particularly care for my style, and some still don’t today.”

He thanked his family and Reds fans - "You are absolutely, unequivocally the best." And, in a touching moment, he saved his most heartfelt words for his longtime radio partner, Joe Nuxhall, who was sitting in the VIP section.

“It’s awfully nice to work with a living legend for 27 years and that’s what I’ve done since 1974,” Brennaman said. “Whatever success I’ve had, I willingly and gratefully share with the Ol’ Lefthander, Joe Nuxhall. I can never begin to repay what he’s meant to me. He's been a mentor and a very, very wonderful friend. Thank you, Joe.”

As Brennaman finished his speech, he looked into the crowd, waved and said, “And this one belongs to you.”

When Brennaman went back to his seat on the stage, Feller leaned over and whispered to him.

Which is just what Brennaman has been doing for 46 years.