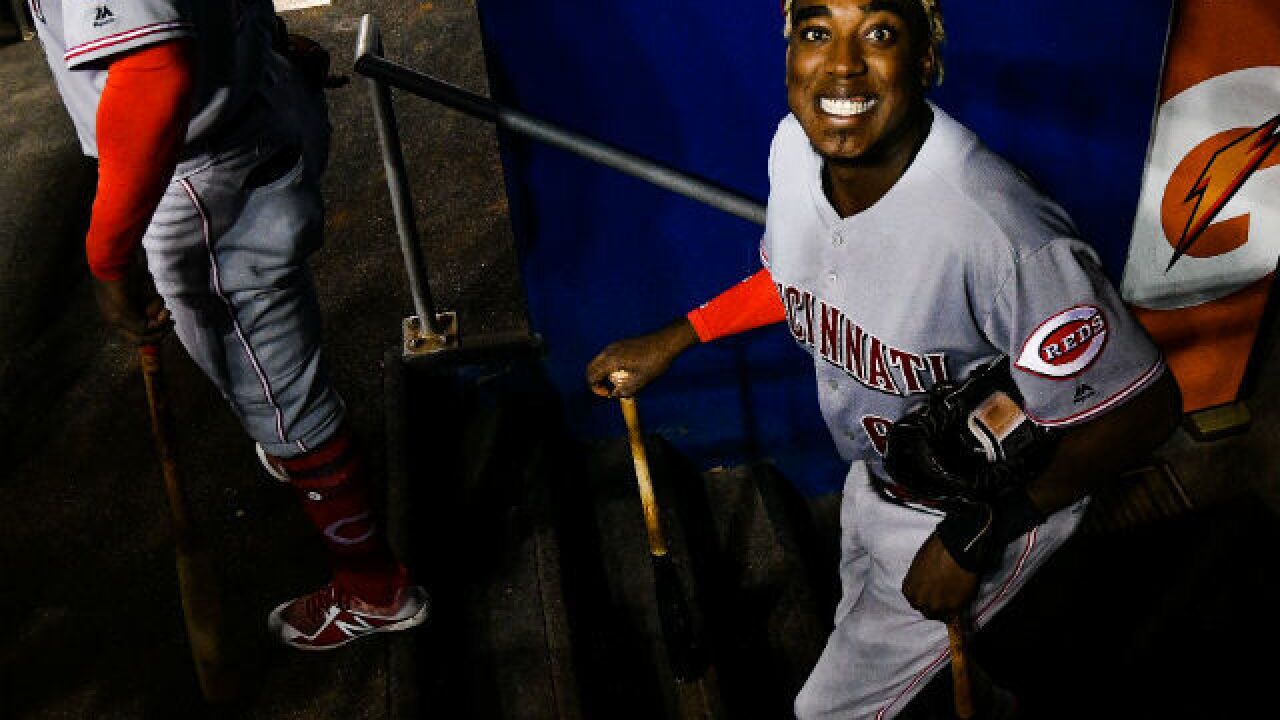 Image copyright 2018 Getty Images. All rights reserved. This material may not be published, broadcast, rewritten, or redistributed.
<p>MIAMI, FL - SEPTEMBER 20: Gabriel Guerrero #61 of the Cincinnati Reds stands on the dugout steps at Marlins Park on September 20, 2018 in Miami, Florida. (Photo by Mark Brown/Getty Images)</p>

MIAMI  - No one will remember the Reds’ 90th loss of the year as they play out the string on their fourth straight last-place season.

The 24-year-old Reds rookie, called up three weeks ago, hit his first major-league home run and accounted for the only Reds’ run in a 5-1 loss to the Marlins.

It was the second hit in 10 at-bats for the nephew of  2018 Hall of Famer Vladimir Guerrero. To Guerrero, his every step around the bases was memorable.

“It was amazing running the bases. I was floating,” he said.

“Words can’t describe how much fun it is to be up here,” the 24-year-old Dean said. “It’s everybody’s dream as a kid. To finally be up here is unreal. I’m one of those guys who is always going to have a smile on my face. Whatever happens next year, just count on me playing the game hard and trying to win every single game.”

“I don’t really care about strikeouts,” DeSclafani said. “I’ll take 20 balls smoked right at me if it means zeroes.”

DeSclafani committed a pair of errors in the fourth, which led to two unearned runs. It could have been a 1-2-3 inning, but he mishandled a dribbler by J.T. Realmuto, and Lewis Brinson and Dean delivered two-out RBI singles.

Drew Steckenrider came on to get the final out and strand two runners for his fifth save.

Slumping Miami rookie Brian Anderson singled in the sixth for his first RBI in nine games.

The crowd of 12,559 was the Marlins’ largest at home this month.

Marlins second baseman Starlin Castro made a diving catch of Scooter Gennett’s two-out liner to rob him of an RBI hit in the sixth.

Miami improved to 4-2 against Cincinnati in 2018 and won the season series for the fourth consecutive year.

Reds: SS Jose Peraza was back in the lineup after missing Friday’s game due to illness.

The Marlins play their home finale Sunday when RHP Trevor Richards (3-9, 4.95) pitches against Cincinnati RHP Michael Lorenzen (3-1, 3.03), who will make his second consecutive start after beginning the season with 42 relief appearances.