Former UC star Ian Happ is having homer-coming against Reds 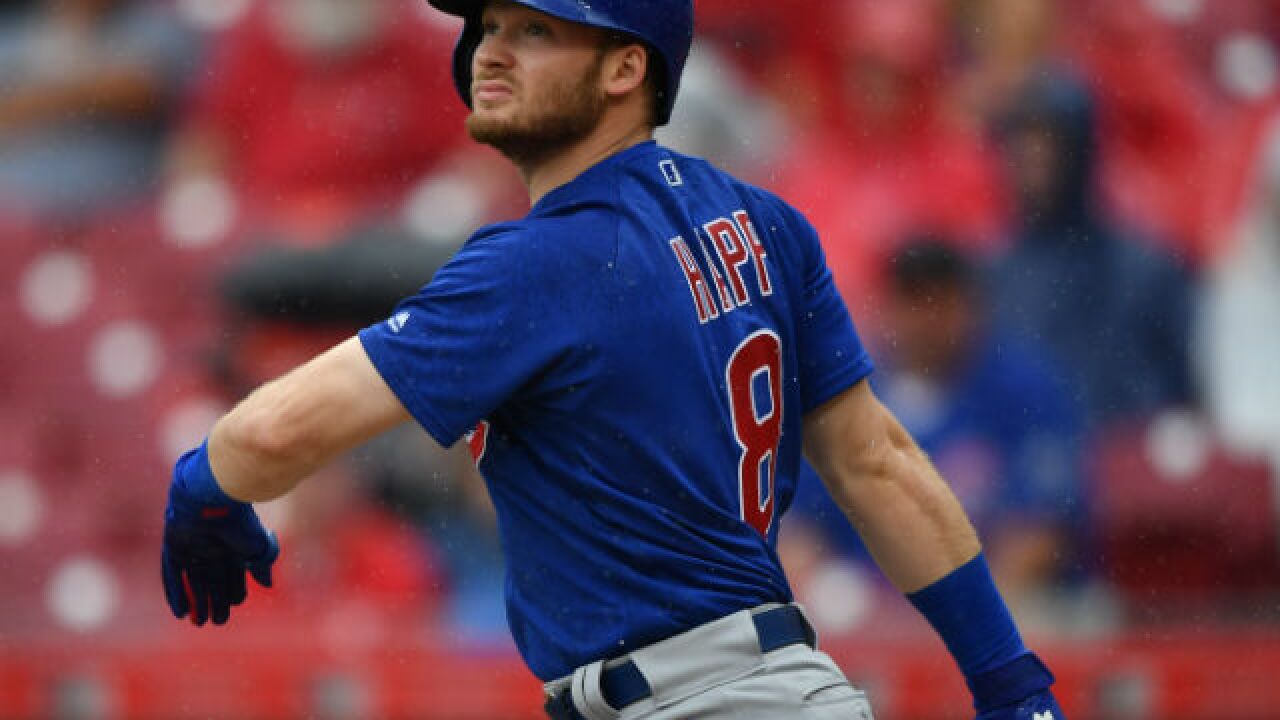 Image copyright 2018 Getty Images. All rights reserved. This material may not be published, broadcast, rewritten, or redistributed.
<p>CINCINNATI, OH - MAY 19: Ian Happ #8 of the Chicago Cubs hits a double in the second inning against the Cincinnati Reds at Great American Ball Park on May 19, 2018 in Cincinnati, Ohio. (Photo by Jamie Sabau/Getty Images)</p>

CINCINNATI — Ian Happ is celebrating his own personal homecoming.

The former University of Cincinnati star hit his second home run of the doubleheader and Jose Quintana allowed one hit in seven shutdown innings as the Chicago Cubs crushed the Cincinnati Reds 10-0 Saturday night for a split.

Happ also tripled and doubled in the opener. He is 5-for-9 with two homers, two doubles and a triple in the first three games of the four-game series.

The solo shot was Happ's seventh homer of the season and the 14,000th home run in Cubs history.

After losing his leadoff spot at the end of April, Happ is starting to regain his batting stroke. He raised his average to .238.

Happ is 8-for-21 during his six-game hitting streak. He became the first Cubs player to hit home runs in both games of a doubleheader since Chris Cochlan on July 8, 2014, at GABP.

Quintana (5-3) kept the Reds hitless through four innings before Scott Schebler singled cleanly with one out in the fifth. Quintana struck out seven and didn’t allow a runner past first base.

“He was definitely on a mission,” Chicago manager Joe Maddon said. “He knew we had a limited bullpen. He pitched great.”

In the first game, Billy Hamilton drew a bases-loaded walk from Justin Wilson while batting against a five-man, drawn-in infield with no outs in the 11th inning and the Reds outlasted the Cubs 5-4.

Anthony Rizzo hit a two-run double and Jason Heyward had a bases-loaded triple in Chicago’s big fifth inning of the nightcap. The Cubs capitalized on Sal Romano’s control problems, which produced a career-high six walks, four while Chicago was sending nine batters to the plate in the fifth.

Romano (2-5), who allowed a career-high six earned runs in his last start, gave up seven this time.

“The fastball command wasn’t there,” Romano said. When you walk six in a big league game, you’re going to get hurt.”

Heyward tied his career high with four RBIs in the game.

The benches cleared in the seventh of the opener when Javier Baez exchanged words with Reds reliever Amir Garrett after striking out to end the inning. The fracas was quickly broken up.

“If you’re going to show somebody up, at least face up or man up and stay there,” Baez said. “Walk this way.”

“Right now, anybody can strike me out because I’m struggling,” he said.

Said Garrett: “I love the way he plays the game. But if you’re going to dish it, you’ve got to take it.”

Baez hit a grand slam off Garrett last May. This time, Garrett shouted in celebration after fanning Baez, then stared at him and exchanged words.

The Reds topped a Chicago team that rallied three times to tie it but left 14 runners on base.

After Cincinnati loaded the bases against Wilson (1-1), the Cubs went to a five-man infield with the speedy Hamilton up, but he drew a walk-off walk on five pitches.

Cincinnati pitchers issued a combined 16 walks in the doubleheader, which was scheduled after the Cubs’ game at Cincinnati on April 3 was postponed by rain without starting.

Cubs: RHP Yu Darvish (0-3) makes his second start since coming off the disabled list on Monday. He has 13 strikeouts in a combined 12 2/3 innings over two career starts against Cincinnati.

Reds: RHP Tyler Mahle (3-5) allowed one hit with two walks and seven strikeouts in six innings of Cincinnati’s 1-0 win over Chicago on April 2.