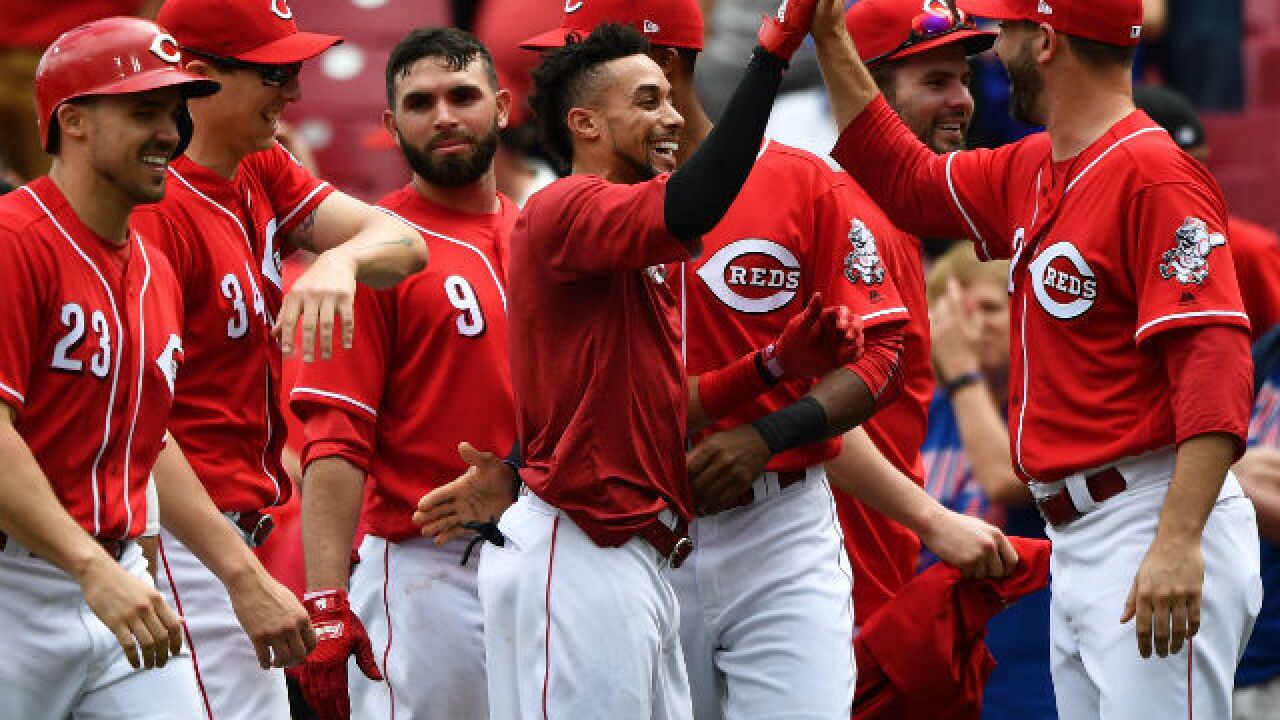 Image copyright 2018 Getty Images. All rights reserved. This material may not be published, broadcast, rewritten, or redistributed.
<p>CINCINNATI, OH - MAY 19: Billy Hamilton #6 of the Cincinnati Reds celebrates with Matt Harvey #32 of the Cincinnati Reds after walking in the winning run in the eleventh inning against the Chicago Cubs at Great American Ball Park on May 19, 2018 in Cincinnati, Ohio. Cincinnati defeated Chicago 5-4 in eleven innings. (Photo by Jamie Sabau/Getty Images)</p>

Batting against a drawn-in, five-man infield, Hamilton drew a bases-loaded walk from Justin Wilson with no outs in the 11th inning and the Cincinnati Reds outlasted Chicago 5-4 Saturday in the first game of a day-night doubleheader.

“If he threw a strike, I’d have to put the ball in play,” Hamilton said. “It’s kind of tough when you see a five-man infield and two guys playing up the middle. It gets you to thinking you’ve got to do something different, but you’ve got to relax.”

“Billy had a great at-bat,” interim manager Jim Riggleman said. “We let some chances go by. I thought it would haunt us, and sure enough, it did. We had a lot of good at-bats. Schebler and Duvall. Tucker gave us a chance.”

The Reds topped a Chicago team that rallied three times to tie it but left 14 runners on base. University of Cinncinati product Ian Happ homered, tripled and doubled for the Cubs, who drew a large contingent of fans to Great American Ball Park.

“We have to have better at-bats in those moments,” Cubs manager Joe Maddon said. “I think that may be one of my least favorite games as the Cubs manager. We just looked a little fatigued. We just didn’t do a good job. That’s possibly one of my worst games sitting in that dugout."

The benches cleared in the seventh when  Cubs second baseman Javier Baez exchanged words with Reds reliever Amir Garrett after striking out to end the inning. The fracas was quickly broken up.

“It’s awesome,” Florio said. “For it to happen like that, it’s a great experience. I’m excited. It is hard to catch my breath.”

Florio thanked Riggleman for putting him into a tie game in the 10th.

"It is a great feeling for him to put me in those situations. I want to prove I can do it,” he said.

The Cubs trailed 4-2 in the eighth before Happ homered off Reds closer Raisel Iglesias and Anthony Rizzo hit a tying double with two outs.

Both Scooter Gennett and Eugenio Suarez drove in two runs for the Reds.

Reds starter Luis Castillo walked five and allowed six hits, but the Cubs managed to score just one run while stranding eight runners in his five innings. They finished 1 for 16 with runners in scoring position.

Castillo left with a 2-1 lead, but the Cubs rallied to tie it in the sixth against David Hernandez on Happ’s leadoff triple and a double by pitcher Kyle Hendricks.

The doubleheader was scheduled after the Cubs’ game at Cincinnati on April 3 was postponed by rain without starting.

Kris Bryant’s steal of second base with one out in the Cubs' 11th was his first swipe of the season.

Tommy La Stella’s eighth-inning single for the Cubs was his major league-leading ninth pinch hit of the season.

Cubs: Albert Almora Jr. stumbled while scrambling back to second base on Bryant’s first-inning single, leading to a visit from manager Maddon and a trainer. Almora did a test run into the outfield and stayed in the game.

Cubs: RHP Yu Darvish (0-3) makes his second start since coming off the disabled list on Monday. He has 13 strikeouts in a combined 12 2/3 innings over two career starts against Cincinnati.

Reds: RHP Tyler Mahle (3-5) allowed one hit with two walks and seven strikeouts in six innings of Cincinnati’s 1-0 win over Chicago on April 2