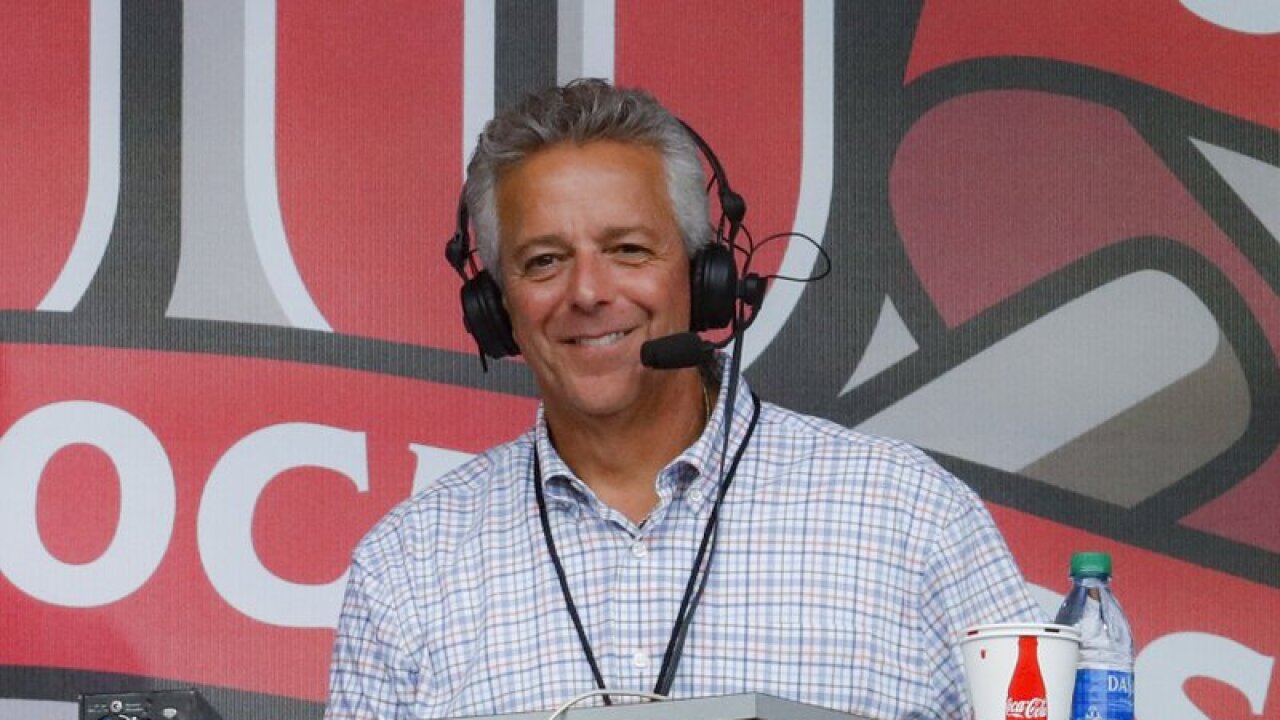 (Copyright 2020 The Associated Press. All rights reserved. This material may not be published, broadcast, rewritten or redistributed.)
(AP Photo/John Minchillo, File)
Thom Brennaman

Cincinnati Reds and Fox Sports Ohio broadcaster Thom Brennaman tells WCPO he has resigned from his position more than one month after he was suspended for using a homophobic slur on air.

“My family and I have decided that I am going to step away from my role as the television voice of the Cincinnati Reds,” Brennaman wrote to WCPO. “I would like to thank the Reds, Reds fans and the LGBTQ Community for the incredible support and grace they have shown my family and me.“

Brennaman has been suspended from the Cincinnati Reds since the Aug. 19 incident. He had been with the Reds since 2006.

"I have been in this profession that I love for 33 years," he wrote. "It is my hope and intention to return. And if I'm given that opportunity, I will be a better broadcaster and a much better person."

WCPO reached out to the Cincinnati Reds and Fox Sports Ohio for comment.

"The Reds respect Thom Brennaman’s decision to step away from the broadcast booth and applaud his heartfelt efforts of reconciliation with the LGBTQ+ community," team CEO Bob Castellini wrote in a statement. "The Brennaman family has been an intrinsic part of the Reds history for nearly fifty years. We sincerely thank Thom for bringing the excitement of Reds baseball to millions of fans during his years in the booth. And, we appreciate the warm welcome Thom showed our fans at Redsfest and on the Reds Caravan. He is a fantastic talent and a good man who remains part of the Reds family forever. We wish him well."

The incident happened returning from a commercial break before the top of the seventh inning in the first game of a doubleheader against the Kansas City Royals. An off-camera Brennaman described an unknown city as "one of the (expletive) capitals of the world" during the broadcast.

Fox Sports Ohio later clarified that the audio only went out to viewers streaming the game, not on over-the-air television.

Brennaman apologized later in the second game before leaving the broadcast booth.

“I made a comment earlier tonight that I guess went out over the air that I am deeply ashamed of,” Brennaman said. “If I have hurt anyone out there, I can’t tell you how much I say, from the bottom of my heart, I’m so very, very sorry. I pride myself and think of myself as a man of faith … I don’t know if I’m going to be putting on this headset again.”

Following a column by WCPO 9 News anchor Evan Millward about the history and context of the slur, Brennaman penned another apology.

READ THE COLUMN: This is not a time to be quiet. Thom Brennaman, help me understand.
READ THE APOLOGY: 'I am truly and deeply sorry': Brennaman apologizes for use of slur in letter to LGBTQ community, fans

Thom, the son of Hall of Fame broadcaster Marty Brennaman, has been with FOX Sports for the past 27 years, covering primarily baseball and football during that time.

FOX Sports removed Brennaman from its NFL season after the incident.

“FOX Sports is extremely disappointed with Thom’s remarks during Wednesday’s Cincinnati Reds telecast,” the network said in a statement. “The language used was abhorrent, unacceptable, and not representative of the values of FOX Sports. As it relates to Brennaman’s FOX NFL role, we are moving forward with our NFL schedule, which will not include him.”

Brennaman had been a part of Fox’s NFL announcer lineup since they started televising the league in 1994. He was part of the No. 3 announcer team last season and was paired with analyst Chris Spielman and reporter Shannon Spake. He had also called Major League Baseball games for the network from 1996 to 2014.

Although most regional networks still carry the Fox Sports name, they are not owned by Fox. Sinclair Broadcast Group bought them in 2019.

“I am grateful for the forgiveness so many have extended to me, especially those in the LGBTQ community who I have met, spoken with and listened to almost daily over the last five weeks,” Brennaman wrote Friday. “With their continued guidance, I hope to be a voice for positive change.”

Brennaman declined to speak on camera with WCPO about the incident or resignation on Friday afternoon.