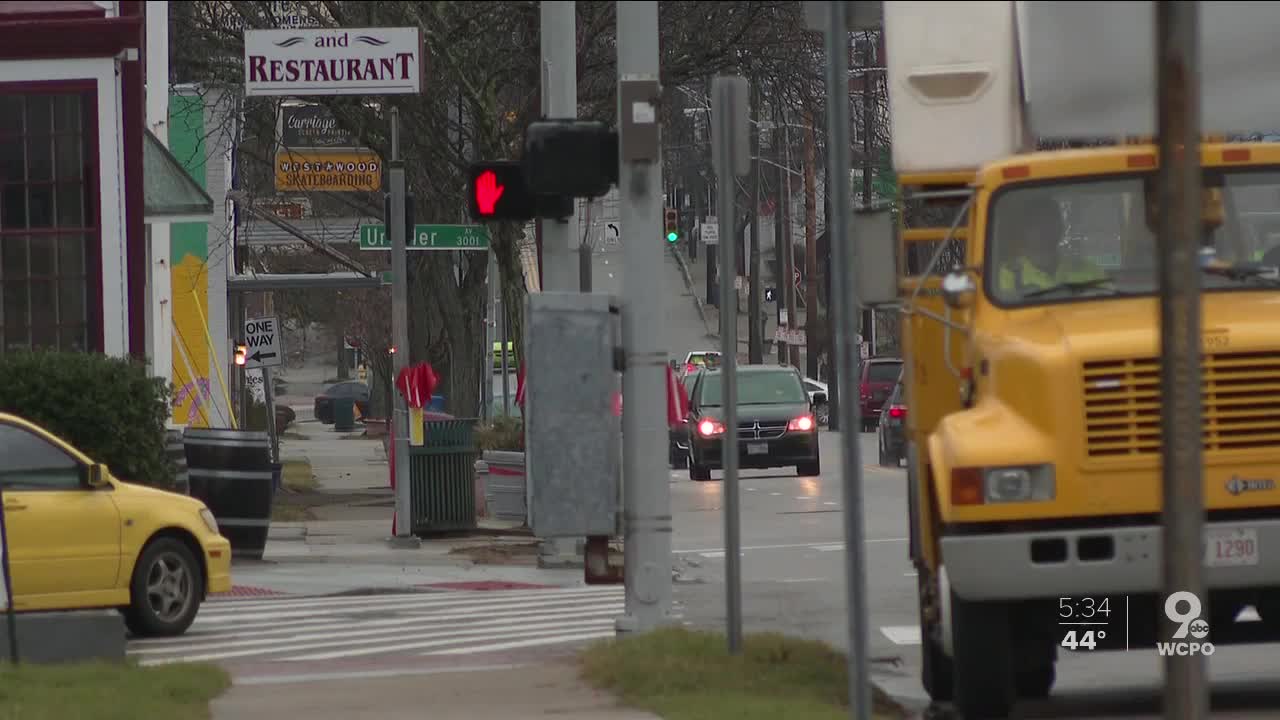 As Cincinnati's most populated neighborhood redevelops its business district, the need for more traffic safety measures is becoming clear.

CINCINNATI — One of the city's most heavily traveled roads for the morning and afternoon commutes is undergoing some changes.

Harrison Avenue connects western Hamilton County with Cincinnati's urban center via the neighborhoods of Westwood, East Westwood, North Fairmount and South Fairmount before traveling across the Western Hills Viaduct into the city's core. It's the most direct route for thousands of suburban residents who work in the city, which means drivers have a tendency to speed on their way to and from work.

"People drive incredibly fast," said Westwood resident Leslie Rich. "There are multiple traffic accidents that happen at the corner of Montana and Harrison (avenues) because people are running lights or moving too quickly."

In addition to living in Westwood — the city's most populous neighborhood with more than 30,000 residents — Rich heads up the community development organization Westwood Works. She and her team are among the groups leading the Westwood Town Hall neighborhood revitalization project. The central focus of that redevelopment is the redesign of Westwood Town Hall Park situated between Harrison, Montana and Epworth avenues.

The park isn't the only revitalization happening along this quarter-mile stretch of Harrison Avenue. West Side Brewing finished construction on its taproom across Harrison in 2017, and Nation Bar & Grill will soon move into the historic firehouse across Epworth.

Rich said the neighborhood's business vacancy rate was about 75% two years ago. It's dropped below 40% in the time since.

"Westwood has been in the midst of a renaissance for about the last two years," Rich said. "It's important for us for people to see this as a place where they want to visit and for our neighbors that live here that it is a place that they feel safe walking to and patronizing businesses, utilizing our parks."

This, she said, builds community: "Getting out of their cars, meeting people face-to-face, that makes neighborhoods stronger," Rich said.

For Rich, this makes the neighborhood's traffic safety efforts all the more urgent as more people begin walking through the Town Hall district.

"Even with crosswalks and the great flags that a Girl Scout troop installed to make pedestrians more visible, there are multiple times where we have near misses or pedestrians being hit by vehicles," she said.

So far, the city has implemented 24-hour parking along the business district's stretch of Harrison — a strategy that proved effective along Hamilton Avenue in Northside's business district — and officials lowered the speed limit from 30 miles per hour to 25 in January. In December, city engineers reconfigured the intersection of Harrison and Epworth to give pedestrians crossing their own phase in the signal cycle.

This week, the city installed two sets of digital screen display signs to alert drivers of their speed as the enter the Town Hall district.

And more changes could be on the way, according to a memo issued last week by City Manager Patrick Duhaney, including new and upgraded street lighting along with curb bump-outs at Montana and Harrison. (The idea with the bump-outs: They are installed to decrease the distance pedestrians have to cross at an intersection as well as will protect the cars parked in the 24-hour parking lane.)

Duhaney also wrote in his memo that Cincinnati Police District Three "will have officers target these intersections for enforcement when possible."

"We’ve noticed lots of folks becoming aware of the new speed limit by getting pulled over," she said. "There has been some difference, where some of that drag racing that happens at the intersections has stopped because there is no place for that second lane to be involved in that."