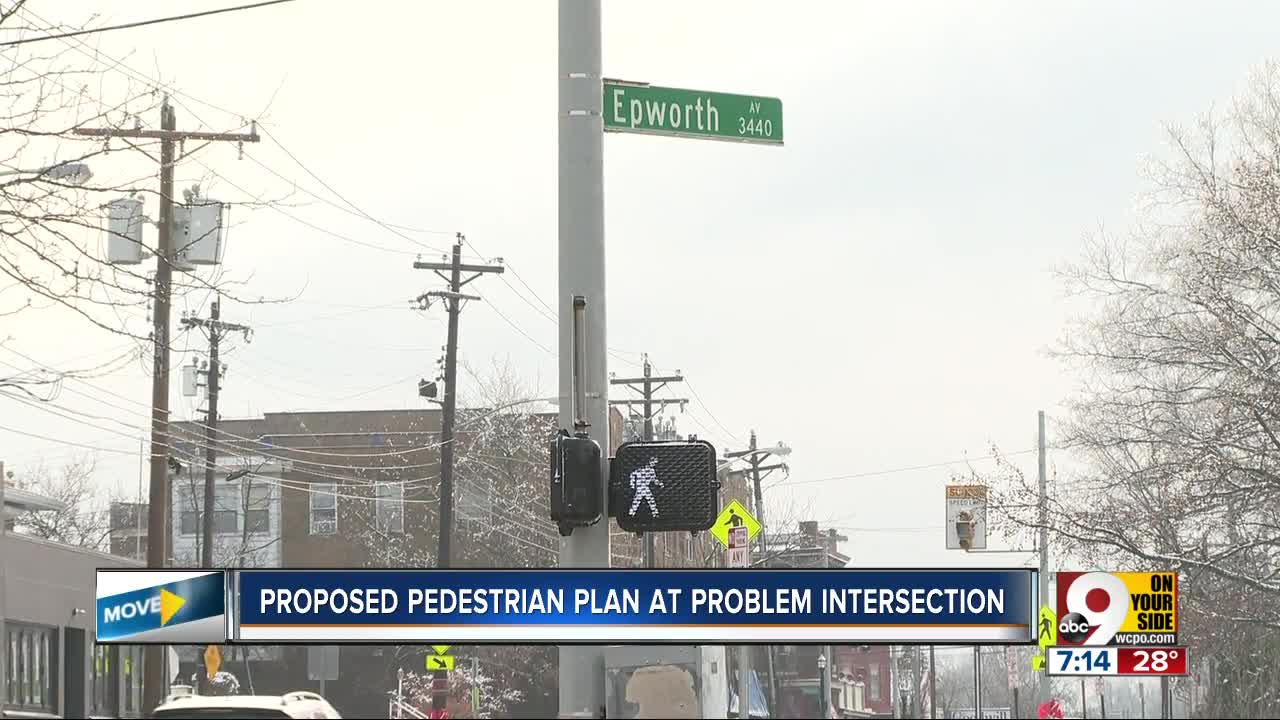 The intersection of Epworth and Harrison avenues in the heart of Westwood is about to become a one-of-a-kind pedestrian-friendly feature in Cincinnati traffic. City engineering crews recently completed a redesign of the busy intersection's curbs and pedestrian crossings, and there are plans to reconfigure traffic signal cycles to include what city transportation officials are calling a "pedestrian priority phase."

CINCINNATI — The intersection of Epworth and Harrison avenues in the heart of Westwood is about to become a one-of-a-kind pedestrian-friendly feature in Cincinnati traffic.

City engineering crews recently completed a redesign of the busy intersection's curbs and pedestrian crossings, and there are plans to reconfigure traffic signal cycles to include what city transportation officials are calling a "pedestrian priority phase."

The idea — commonly referred to by transportation professionals as a "pedestrian scramble" — is that after Harrison and Epworth have both had traffic flow, all vehicular signals will turn red, allowing pedestrians sole access to the right-of-way for a short period.

Multiple U.S. cities have experimented with the pedestrian scramble, including Kansas City, Denver, Boston and Washington, D.C. The city of Victoria, in the Canadian province of British Columbia, produced this video demonstrating the general principle:

Although the Westwood intersection will not include the diagonal crossing option, the four-way vehicle stop phase will soon go into effect, officials with the city's Department of Transportation and Engineering confirmed Tuesday. The hope is to reduce the likelihood of moving vehicles coming into contact with people crossing Harrison or Epworth.

With construction underway on the nearby Westwood Town Hall development, the need for better safeguards against pedestrian-involved traffic crashes in the area has never been higher, said City Planning Commissioner and lifelong Westwood resident John Eby.

Eby has personal experience with the issue of pedestrian safety at this very intersection. In November 2018, a driver struck him with a minivan while Eby was crossing Epworth along Harrison.

"Right in the intersection. Bam!" he said. "I don't remember hitting the car or the ground."

According to a police report, Eby was in a crosswalk and had a walk signal when the driver turned left on a green light. He later said he was lucky — he was injured, not killed.

"People drive way too fast on Harrison Avenue," Eby said. "I'm fortunate that this car was turning, going maybe 10 or 15 miles per hour."

Eby said he wants to know, in addition to giving pedestrians their own turn in the rotation, if the new traffic signal patterns will also slow drivers down.

"We're going to create a small delay there, so people are going to have to slow down," he reasoned.

But that's just one side of the coin, he warned: With the potential for traffic slowdown along the busy commuter corridor, he said, "We could possibly be creating the opportunity for some road rage, right? Like, 'Oh my gosh, why is it taking so long to get through this intersection?' "

Eby said he hopes the DOTE and the Cincinnati Police Department will assist in outreach to the Westwood community as the new signal configuration rolls out.

WCPO reached out to the city administration for more details but did not receive an immediate response.