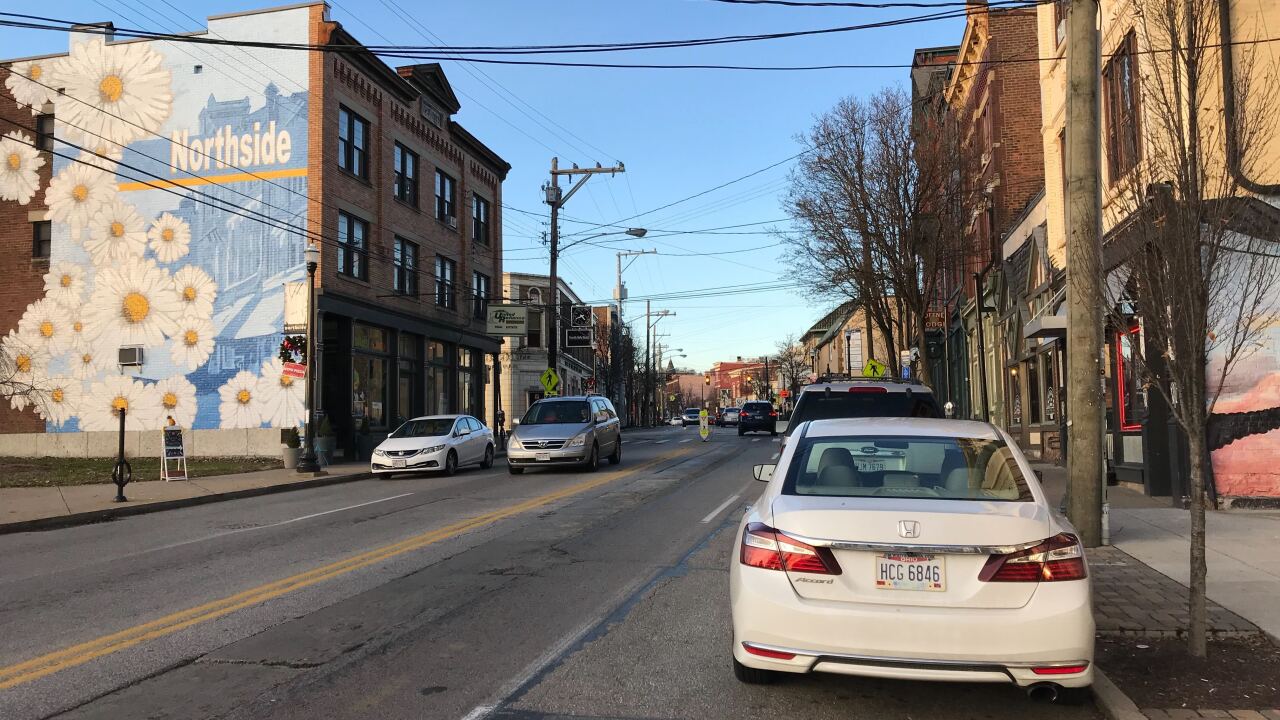 CINCINNATI — In May, the city implemented 24-hour parking along Hamilton Avenue in Northside, with the hope of slowing down drivers and, in theory, prevent crashes.

As far as preventing crashes, the theory is proving true so far, and one City Council member is calling to make the change permanent.

Between May 1 and Nov. 30 of this year, city data indicate there were five morning and afternoon rush hour crashes between the 4000 and 4200 blocks of Hamilton Avenue running through the neighborhood's densely populated business district. Last year, the number of crashes within the same stretch and time periods was 15.

That's a 67 percent reduction in crashes in a single year.

In the morning rush hours, crashes dropped by 100 percent, from one in 2017 to zero this year.

On May 12, the city removed restrictions that prohibited parking on Hamilton Avenue during the morning rush hours, from 7-9 a.m., and the afternoon rush hours, from 4-6 p.m. The change effectively reduced rush hour traffic from two lanes to one in each direction.

Mark Samaan volunteers for the NCC's Pedestrian Safety Task Force -- that is, when he's not volunteering with the Better Bus Coalition or working as a planner for Hamilton County. He said he sees the crash reduction less as a result of the parking change and more to do with the change in the number of lanes drivers have to use.

"It’s not the 24-hour parking, but restricting travel to one lane, that helped reduce crashes," Samaan said.

Samaan presented the crash data to the community this week.

While the city initially considered the rule change a monthlong pilot program, it has remained in effect since May.

Cincinnati Police Lt. Steve Saunders said he was pleased to see the drop in crashes, as his department works to target hot spots for aggressive driving. In October, CPD conducted a two-week traffic enforcement blitz along certain street segments throughout roughly 20 city neighborhoods, including Hamilton Avenue in Northside.

"It is great to see those reductions. Northside was one of the communities that received a highly focused enforcement effort during this blitz," Saunders said.

The crash data reinforce results of a city survey presented last week by the Northside Community Council, which showed that 80 percent of respondents felt safer after the parking rule changed. That survey consisted of more than 200 people who said they use the road at least once a week.

Samaan presented preliminary crash data to the council during its Dec. 17 meeting, but said this data set is more comprehensive and reinforces the impact of the parking rule change.

"Surveys give you an idea of how people feel," he told WCPO. "But you're only getting the opinions of those who took the survey. The crash data is an objective thing. You can see immediately that crashes fell."

The next step, Samaan said, is reviewing the data and working to make the change permanent. At its most recent meeting, the community council voted almost unanimously to express its support for maintaining 24-hour parking through the business district indefinitely.

"I can’t think of anything that would bring crashes down so much, short of 24-7 (traffic) enforcement," Samaan said, adding that he hopes other neighborhoods start exploring this possibility. "If there’s any area that finds a way to reduce crashes, I think other neighborhoods should look at it. The concept is the same."

On Friday, Dec. 28, Council member P.G. Sittenfeld filed a motion calling on the DOTE to make the change permanent.