'Now all of a sudden, I'm eating crow' 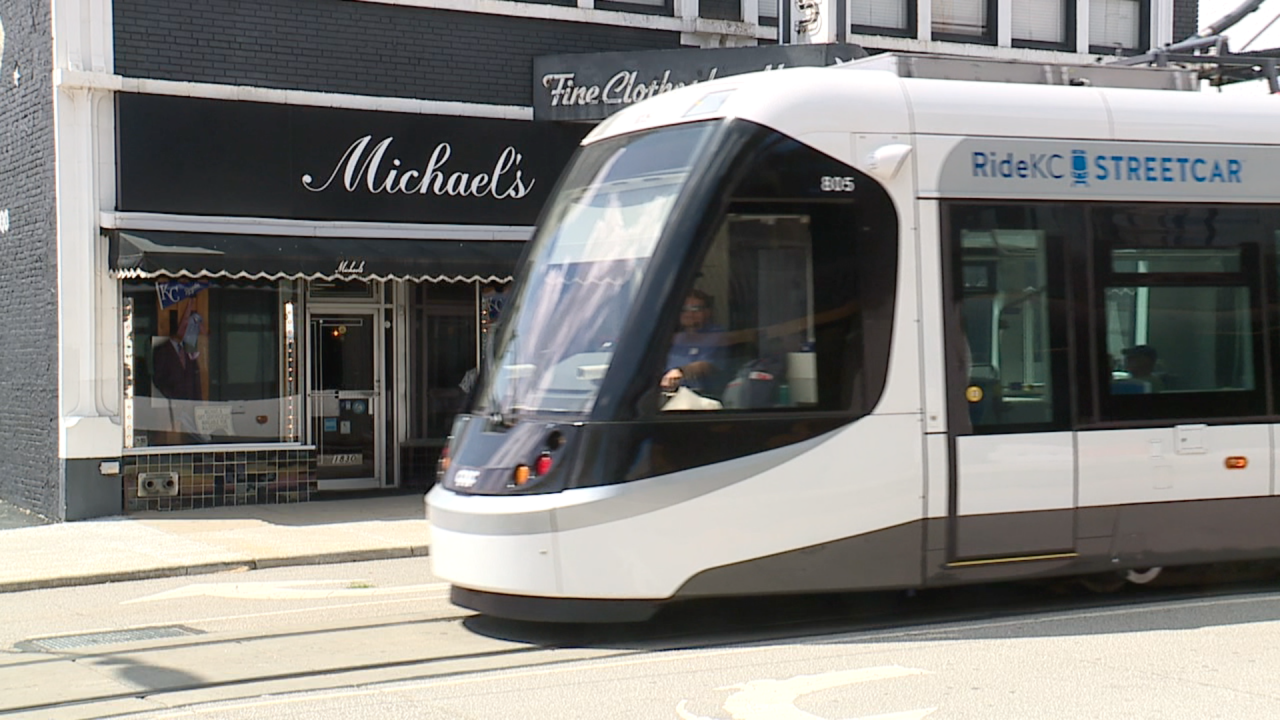 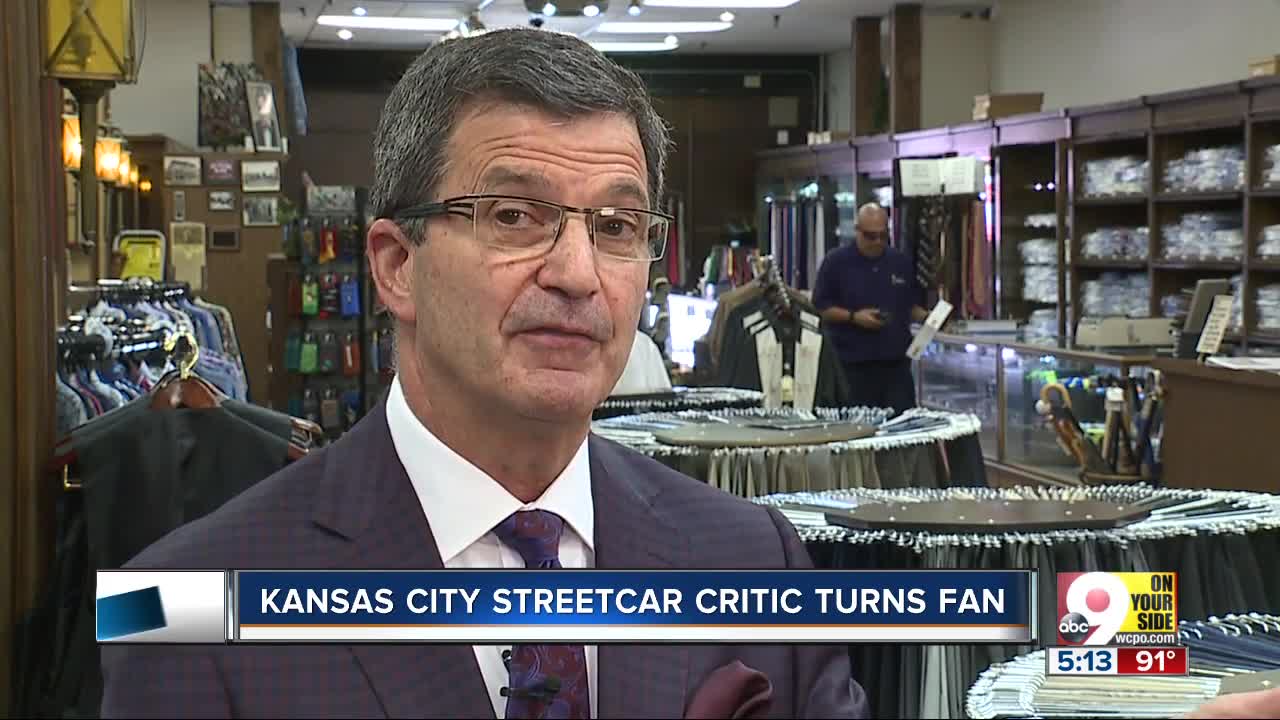 Editor's note: Since opening on Sept. 9, 2016, Cincinnati's investment in its streetcar system is approaching $200 million in construction and operations costs. It also remains the subject of focused public scrutiny as ridership lags behind original expectations and leaders work to find a way to make the system more efficient. WCPO visited a similar system in Kansas City, which has seen ridership growing and is now poised to expand. This report is part of a series of stories about what we learned.

KANSAS CITY, Mo. -- When construction began on the KC Streetcar system, it had few opponents more vocal than Keith Novorr.

"I was a pessimist, no question," said Novorr, who owns Michael's Fine Clothes for Men, located in Kansas City's Crossroads neighborhood. The new streetcar tracks run along Main Street, just feet from his storefront.

"All these businesses that were on Main Street -- it was completely torn up to put all the metal rails in, and everyone had a very difficult time with business, including me," he told WCPO.

Novorr's grievances ran the gamut: Beyond construction headaches blocking access to his store, Novorr objected to the special taxing district the project established to fund operations, and all for a streetcar that he and others perceived to be nothing more than "an amusement park ride."

But then the KC Streetcar began running in May 2016.

"Now all of a sudden, I am eating crow," Novorr said. "When they put these rails in Crossroads, which was nothing before, my goodness, economic development has flourished."

It wasn't an easy corner for Novorr to turn -- and he says his feelings are still somewhat mixed -- but he has changed his tune. Or, at the very least, he's tweaked it.

"There's good and bad, but the good completely outweighs the bad," Novorr said. "I'll be the first to tell you."

Novorr's business has roots on Main Street that predate the KC Streetcar. In fact, the new streetcar is far from the first to run past Michael's front door.

"I'm third-generation. My grandfather, Michael, opened this store in 1905" as a pawn shop, Novorr said. "My grandfather picked this location because it was smack in the middle of Union Station and Downtown."

Union Station to this day serves as both a cultural center and a functional passenger and freight railway station.

For much of the early and mid-20th century, streetcars were a part of everyday life in downtown Kansas City. After speaking with WCPO for an interview in his store, Novorr pulled down from the shop wall a photograph dated 1928. It showed streetcar tracks criss-crossing over the intersection of what is now Main and 19th streets.

"This is Michael's Jewelry," he said (by that time the business had evolved). "This was one of the only intersections in Kansas City where the streetcar could go west, east, north, south."

Novorr and his business are so deeply rooted in the city's history with streetcars that, once construction began, he would sometimes tease construction crews with the photo: "Sometimes I'd run outside and tell them, 'Hey, you've got another track over here!' They'd ask, 'Where did you even get that?'"

'Ready to buy crates of tea'

Novorr said his biggest beef with Kansas City's venture back into the streetcar business: "I was totally against the way it was financed."

In order to fund operations each year, the city created a special "transportation department district" in the areas immediately surrounding the streetcar -- including Novorr's store. The district levies both a 1 percent sales tax on all sales within the district as well as special property assessments on an annual basis:

Some parking facilities within the district are also subject to a special tax assessment -- but not parking garages and free parking lots, of which there are many -- and only up to a maximum of slightly less than $55 per space per year.

For comparison, the Cincinnati Bell Connector's funding model is a little more hodge-podge, relying on rider fare, sponsorships and advertising, intermittent Federal Transit Administration grants, incremental parking revenue in and around Over-the-Rhine, voluntary contributions from developers near the tracks (in exchange for tax incentives) and a 10-year annual donation commitment from the Carol Ann & Ralph V. Haile, Jr./U.S. Bank Foundation.

READ MORE: Kansas City's streetcar is about to double in length and investment. Why not here in Cincinnati?

Novorr, though, was not able to participate in this voting process, because he does not actually live in the district himself.

"I couldn't vote on it. I lived in Kansas. I didn't think that was incredibly fair," he said. "I was ready to go buy crates of tea like the Boston Tea Party because, 'taxation without representation,' you know? I thought there would be an addendum made at least for those of us who were on the line and inconvenienced for two years.

"It was tough," Novorr said. "It was not easy, and, you know, we just had to tighten things up."

Despite legal challenges to the non-eligibility of business owners to participate in the special election, courts upheld the streetcar authority's method of approving the special taxing district.

This still irks Novorr to a some degree.

"I still don’t really like the way it’s financed because it’s free (for riders) but, what can I tell you," he said. "Our taxes have gone up."

Despite these misgivings, Novorr now calls the KC Streetcar a "complete success."

"The economic uplift in this area: It's attributed to a lot of people's success," he said, both of his store -- where he says walk-in traffic has grown by 60 percent since 2016 -- and the Crossroads neighborhood.

"We've basically gone from the outhouse to the palace in geographics in this city," he said.

Estimates vary depending on whom you ask, but Mayor Quinton Lucas puts the amount of real estate investment along the streetcar route at more than $1 billion; others say it's closer to $2 billion, although WCPO's research yielded no official total on record.

Nevertheless, Novorr insists that, from his vantage point, the streetcar has made a big impact.

"At the beginning, all the businesses around here, they were all empty warehouses, empty storefronts. We were what's called a 'destination store' way back when," Novorr said. "Now, there's so much happening around us, but at the center of that was this streetcar."

Now, with the new walk-in traffic the streetcar has generated for him, Novorr said, he's finding himself growing as a business owner and a salesman, as well.

"Do I sell everybody? No, but I've got to learn to be a little more patient," he said. "From the beginning, when we were a destination store, people knew who we were, what we were. Now, those walk-ins are coming in, looking, leaving... and coming back."

The entire construction and launch process also made Novorr reflect a bit more personally, especially when he thinks back on his interactions with the streetcar authority during construction: "You know, at the start of all this, I was extremely negative. I was on all the news channels, in the Kansas City Star, and all my friends were going, 'What are you doing?' But it was not an easy situation.

"Did it make a better person out of me? Yes it did; I can get through, I don't want to say 'disasters,' but I learned a lot... just being proactive and mainly being nice even though I was a little on edge a lot of times."