Kansas City's streetcar is about to double in length and investment. Why not here in Cincinnati? 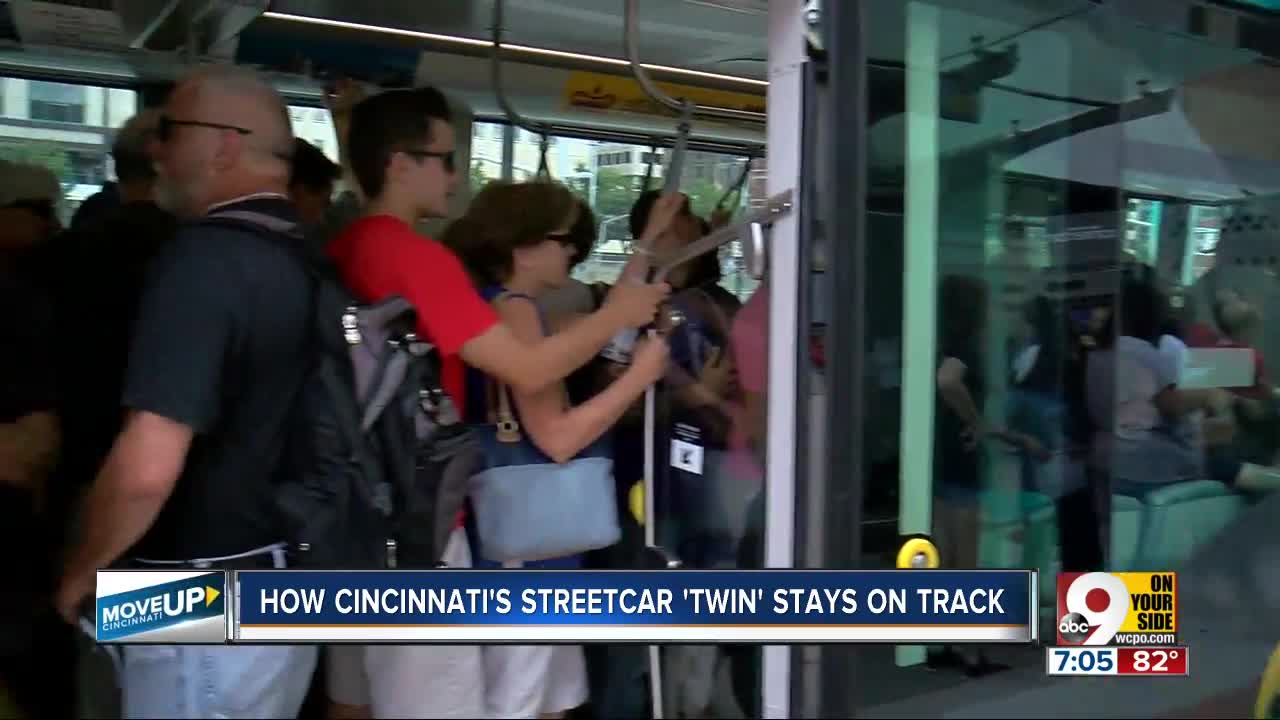 Despite numerous similarities, Kansas City voters recently decided to more than double their streetcar’s footprint while Cincinnati’s streetcar has fumbled with mismanagement from week one, is in the awkward process of an expensive reorganization, and remains the subject of severe public scrutiny and -- in some lingering cases -- outrage. 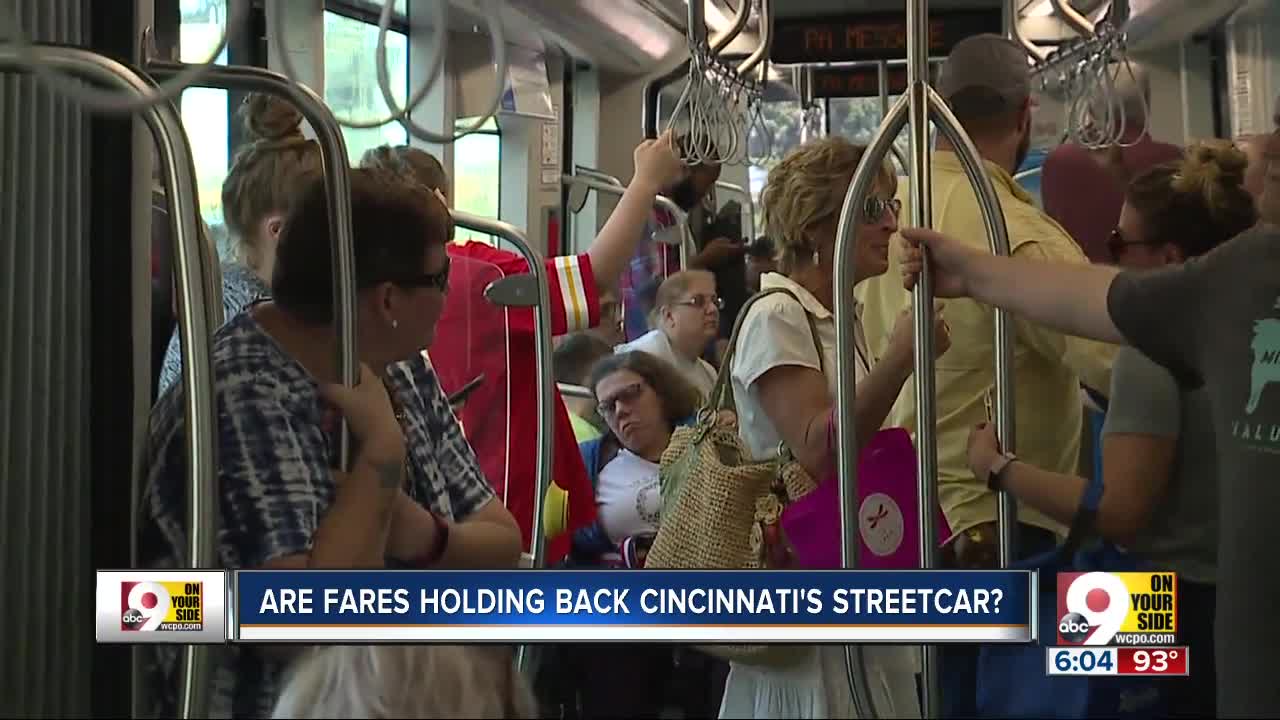 Editor's note: Since opening on Sept. 9, 2016, Cincinnati's investment in its streetcar system is approaching $200 million in construction and operations cost. It also remains the subject of focused public scrutiny as ridership lags behind original expectations and leaders work to find a way to make the system more efficient. WCPO visited a similar system in Kansas City, which has seen ridership growing and is now poised to expand. This is the first in a series of stories about what we learned.

They even have identical vehicle models running on their respective tracks.

Despite these similarities — and numerous others — while Kansas City voters recently decided to more than double their streetcar’s footprint, Cincinnati’s streetcar has fumbled with mismanagement from week one, is in the awkward process of an expensive reorganization, and remains the subject of severe public scrutiny and -- in some lingering cases -- outrage.

This manifests most visibly in how the two systems compare in ridership.

Kansas City's streetcar ridership has grown year over year since 2016 -- including record-setting daily and monthly ridership numbers this past July. Cincinnati's ridership, on the other hand, has remained relatively stagnant. Its peak ridership weekend was its opening weekend, on Sept. 9, 2016, and its peak two months were its first two months of operation:

While the Cincinnati Bell Connector has seen month-over-month ridership growth for the first time in 2019, Kansas City is showing overall, long-term growth that Cincinnati's streetcar has yet to realize. What is Kansas City doing that Cincinnati is not in order to make its investment worth doubling down?

WCPO went to Kansas City to find out.

Maybe the biggest practical difference between riding Cincinnati’s streetcar and Kansas City’s is that, in Kansas City, riders can hop on without having to worry about fare.

Twelve-year Kansas City resident Melissa Hines spoke with WCPO as she corralled her three young children on a standing-room only KC Streetcar vehicle during a mid-August Wednesday lunch hour.

“I didn’t actually learn about it until after it was done, and then I discovered it was free,” Hines said. "The first time we rode it, it was just us. Now we don't have a place to sit."

When asked if the streetcar being free was a big reason why she brings her family to ride, she said: “Oh, yeah.”

Glenn Grayson uses the streetcar to break up his workday routine. He rides it just about every day.

“I work Downtown, so I eat my lunch in my office, and I want to just go out for a little walk, so I walk from 10th Street down to Third Street where there’s a streetcar stop, and then I just take the streetcar back to my office,” he said.

“It’s free to ride, so that’s another reason why I can do it every day.”

Getting people onboard as conveniently as possible is Kansas City Streetcar Authority Executive Director Tom Gerend’s number one goal.

“The fare policy was a huge decision that our board made before we ever opened,” Gerend told WCPO. “We want to remove every barrier that we can remove to ensure that this investment and this system is successful.

“The fare creates some friction. It discourages people to ride."

Gerend said that the biggest factor contributing to KC Streetcar's ability to offer rides for free is that the system is, in part, funded by a 1% sales tax levy in the districts surrounding the streetcar.

"Because our system is in part supported by a sales tax, that sales tax collection is then funneled back in to the system, almost like an indirect fare in a way that’s encouraging ridership, encouraging business activity, economic development, and it’s encouraging growth in our sales tax downtown," Gerend said.

"So it creates this win-win for Downtown business, for streetcar operations in a way that does both things where we’re promoting utilization of the system and we’re really promoting economic activity and economic development Downtown."

Among a number of other technical difficulties, the Cincinnati Bell Connector launched to persistent ticket vending machine malfunctions, which quickly became a topic of criticism. Some on City Council, most notably Councilman David Mann in a Spring 2018 motion, have asked the city administration to explore the cost of making the streetcar free to ride.

Another topic of frequent criticism has been Cincinnati’s complicated streetcar management structure.

Pending current legislation proposed by the city administration, the city owns the streetcar, and the Southwest Ohio Regional Transit Authority currently oversees its operations on the city’s behalf. A third party, Transdev, carries out those operations with its team of operators and mechanics.

City Councilman Greg Landsman first proposed removing SORTA from the equation last year in order to streamline the operation, saying the streetcar needed a singular leader who would be accountable for the streetcar’s performance.

His plan called for appointing a streetcar manager within the city’s Department of Transportation and Engineering. Earlier this year, Travis Jeric assumed the role of Deputy Director of Streetcar Services in that department.

“This new leader is arguably the only way to establish an effective management structure in the short run,” Landsman said in May of 2018.

Jeric’s first major task was to estimate the cost of assuming management of Transdev’s operations contract, a total which came to more than $550,000, Jeric said in a report to City Council's Major Projects and Smart Government Committee last week.

City Council's Budget and Finance Committee must next consider an ordinance that would put the plan into effect.

For Gerend, having a dedicated streetcar authority board and staff has been integral to the KC Streetcar’s success, but they still maintain streetcar oversight outside City Hall.

“I think it was incredibly important because the city has a lot of jobs,” he said. “The city does a great job building big things, whether that be roads or hotels or buildings, and this was right in their wheelhouse building a big public works project.

“But they didn’t have experience in operations of a rail transit system, so we’ve brought on a Kansas City Streetcar Authority, who I work for, that reports to a board of directors.”

Part of the cost associated with Jeric’s plan for the Cincinnati Bell Connector includes contracting transit consultants and legal experts to assist existing city staff with the nuances of managing the federal transit grants that were integral to constructing the streetcar. Most of those positions would be temporary, although his plan calls for a handful of new full-time employee positions within DOTE.

"I strongly believe that there needs to be accountability here in this building for what happens moving forward with the streetcar," said Landsman during Wednesday's Major Projects meeting. "I do worry about the expenses. I don’t think there’s an appetite for spending more on this project outside of what would be required from a transitional standpoint."

But he also wondered if a nonprofit streetcar board is in store for Cincinnati's streetcar's future, as he initially pitched in 2018.

"If at some point there is a nonprofit board, similar to what exists in Kansas City, and it was to be transitioned over to that nonprofit board, would we have to do all of this again?" he asked in committee.

"The direct answer is that yes a lot of this would have to be done again… maybe not all," Jeric said. "It depends on the model that we would move towards. Of course, a lot of variables there."

Having a streetcar authority that from the outset has operated independently from all other transit agencies has allowed it to remain clear of the political debate in which Cincinnati's streetcar remains mired -- particularly now that SORTA, city and county leaders are nearing an agreement on how to pursue a new transit sales tax levy to boost Cincinnati Metro bus service.

"Investing in our bus system and getting a transit levy passed next March next year is one of the most important things we’ll do," Landsman said. "And assuring folks that this has been transitioned and that no dollars associated with the transit levy will go anywhere near the streetcar I think is important."

SORTA being the governmental body that would ultimately propose a sales tax levy measure, those working toward its passage have worried the transit agency's connection with the streetcar would mean the measure's failure at the ballot box.

Some streetcar proponents have characterized the transition process as a political stunt.

"Here's yet another decision being made solely on politics, ignoring the fact that our city administration has zero experience running a transit system," Derek Bauman, with rail transit advocates All Aboard Ohio, said in a statement. "It's clear that the reason our system isn't hitting its potential, while other cities are, is that these decisions are political rather than operational in nature."

The streetcar became politicized more than three years before its actual launch, most famously when Mayor John Cranley campaigned -- and won -- on a promise to cancel the project. Around the same time, then-Ohio Gov. John Kasich also pulled the plug on a substantial sum of state funding for the project.

City Council ultimately salvaged a scaled-down version of the project, removing the connection to the University of Cincinnati in Clifton from the equation.

Another similarity between Kansas City's and Cincinnati's streetcars is that both systems began with doubt and uncertainty.

"As we opened the system, there were skeptics, and we thought that maybe after the first week or two weeks, ridership -- maybe there would be less interest," Gerend said. "Over time, our levels of satisfaction have continued to grow since we’ve opened.

"We continue to attract more people year-over-year to the system, more residents are riding than ever before, and so we never saw the decline in ridership. Actually our ridership trajectory has continued to be positive really since we opened."

He added that it comes down to executing a shared vision for a city's future.

"These things are not easy, particularly when we’re introducing new modes and new technology, but it really is about having a vision for the future and understanding the role that investments like these play in helping us get there."

And, he said, it's about having patience.

"There’s definitely learning," Gerend said. "We’ve had some of the same learning that I believe you all have had, and it really is again trying to make sure that we’re planning for those things. Perseverance, right?"