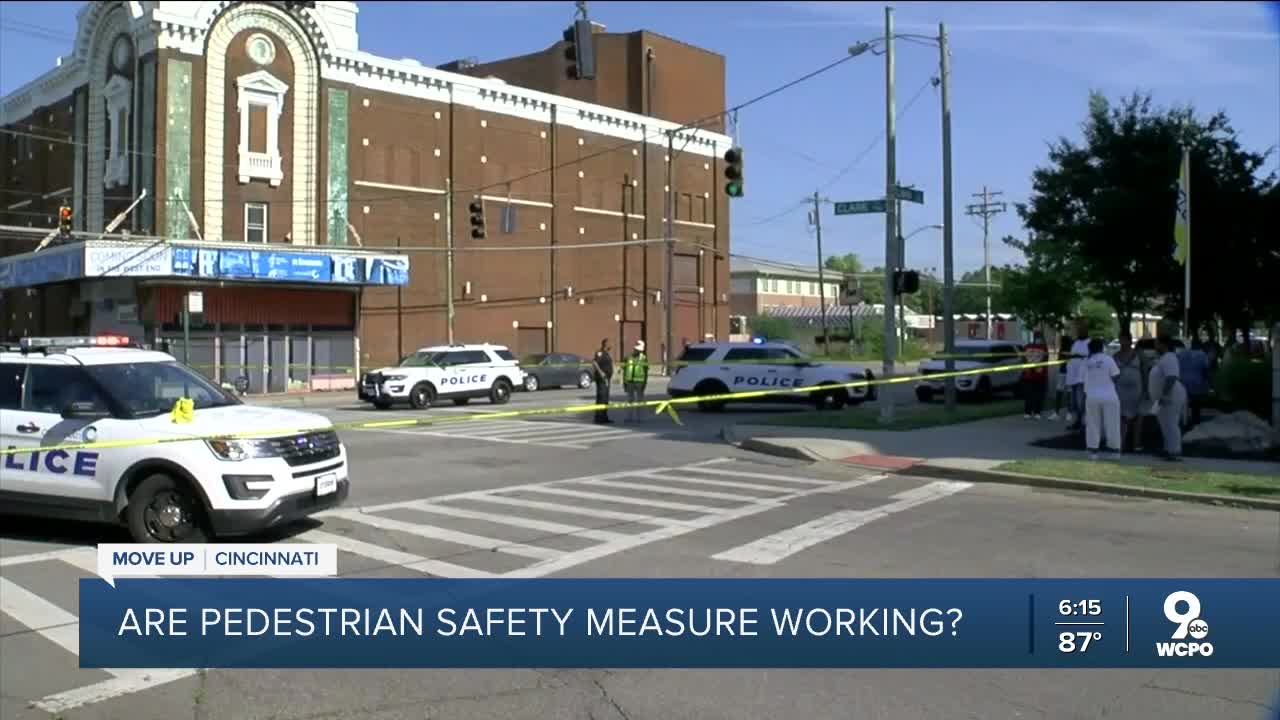 Above the intersection of Linn and Chestnut streets hangs a brand new pedestrian crossing sign equipped with flashing lights. But that sign wasn't enough to prevent the need for vigil candles, placed there this month to mourn the death of a woman killed in that newly designed crosswalk.

CINCINNATI — Before she died, 67-year-old Donna Pringle was known for walking through West End each morning and checking on her neighbors.

"She cared about everybody," said her friend Catherine Johnson. "You know, she knocked on people's doors, the elders to make sure they were OK, to see if they needed something every morning."

Pringle was running an errand for a neighbor when she stepped into a newly redesigned crosswalk spanning Linn Street at Chestnut Street, near the Lincoln Recreation Center. For years, the crosswalk had been faded and difficult for drivers to see. Last year, as part of the city's Pedestrian Safety Fund, the transportation department restriped the crosswalk, installed a pedestrian median island, and hung new signage, including a sign with flashing lights to alert drivers when someone is trying to cross.

Despite these improvements, Pringle hadn't made it halfway across the seven-lane road when a driver struck her with her car. Pringle died from her injuries at the scene of the crash, according to a Cincinnati police report.

Johnson said Pringle's death shook the neighborhood, but she also said that a traffic death on Linn Street didn't come as a surprise, even with the new signs and flashing lights.

"We have [the Lincoln Rec] center; we have schools, but we have traffic, cars riding past here so fast, it's a danger to our community, our kids, our elders," she said. "You know, it's just not safe."

WCPO spoke with Johnson immediately following a July 17 vigil held in Pringle's memory, where flickering candles had replaced the flashing lights. She and others say the city needs to do more to make Linn Street safer for people walking and biking through West End.

'More than a road diet'

Linn Street -- particularly outside the Lincoln Rec Center -- has a reputation for crashes and speeding.

While speed data for the stretch of Linn Street wasn't immediately available, a May 30, 2019 FYI memo from the Department of Transportation and Engineering identified the intersection at Linn and Chestnut streets as prioritized for pedestrian safety improvements due to its proximity to the rec center and its "crash history."

According to Cincinnati police crash data, more than 320 crashes have occurred along Linn Street since 2018. That's a crash roughly every other day or two.

In response, DOTE installed the new signage and flashing beacon above the roadway -- one of 70 pedestrian improvement projects throughout the city, funded during the fiscal year 2020. That city budget allocated $750,000 to the Pedestrian Safety Fund.

But nearby Over-the-Rhine resident and outspoken pedestrian safety advocate Derek Bauman said that, on a road like Linn Street, those improvements are "good things," but they don't go far enough.

"This is one of the most dangerous streets in the city of Cincinnati for pedestrians," Bauman said. "So this street, seven lanes wide, through a residential neighborhood, was specifically planned to be an expressway connector. And it's crazy. It's just crazy."

Shortly following his 2017 campaign for City Council -- in which he placed 14th out of 24 candidates in a race for nine seats -- Bauman focused his efforts on lobbying the city to adopt Vision Zero, a conceptual plan adopted in other cities across the U.S. with the express purpose of reducing traffic deaths to zero in a year. In January 2019, City Council adopted a motion expressing its support for Vision Zero policies.

By calling it an "expressway connector," Bauman was referring to a plan introduced in 1959 to widen Linn Street to its current lane configuration -- two lanes in each direction, a center turn lane, and two parking lanes -- in order to link the Sixth Street Expressway and what at the time was known as the planned Mill Creek Expressway. The Mill Creek eventually became known as Interstate 75.

"This road needs more than just a road diet," Bauman said. "This needs a lap band and Jenny Craig. That's how bad this road is."

"Road diet" has become a common term among road engineers and planners to refer to any project that intends to slow down traffic, usually through methods that involve narrowing the street in one or multiple ways. Earlier this year, the city began construction on the long-awaited Liberty Street improvement project. While the final version only eliminated one lane along the seven-lane road, earlier versions called for it to reduce down to five lanes. At its earliest stage, a three-lane version was recommended.

"It's kind of a superficial level," Bauman told WCPO during an interview on the Linn Street sidewalk, just outside the City West residential neighborhood. As he spoke, a man passed on a Red Bike, riding on the sidewalk, which is against municipal code.

"We want to make it safe for a young man like that on a Red Bike to not have to ride on the sidewalk," Bauman said. "This street needs to be redesigned, re-engineered and completely reimagined from scratch."

According to DOTE officials, the Pedestrian Safety Fund is only equipped to handle "smaller-scale improvements" each year.

The city administration declined WCPO's request for an on-camera interview but provided some remarks via email.

"Lengthy corridors, like Linn Street, are more likely to benefit from larger-scale, corridor-wide redesign," a DOTE official wrote in a statement, provided to WCPO via Communications Director Casey Weldon. "Due to the cost and magnitude of this type of work, DOTE typically seeks state and federal grant dollars for these projects."

In addition to Liberty Street's redesign, DOTE is in the process of re-engineering Warsaw and Ludlow avenues, as well.

As for Linn Street, the DOTE official indicated intent to do more with Linn Street than what the Pedestrian Safety Fund could finance in a single year. While it's still unclear exactly what sorts of additional enhancements might be waiting down the road, a June 23 memo from then-City Manager Patrick Duhaney outlined some of the ways DOTE might expand its scope -- including a plan to pilot raised crosswalks to increase their visibility on roads outside schools and rec centers.

The remarks emailed to WCPO indicated the city was in the beginning stages of engaging the West End Community Council to begin discussions about how else to improve Linn Street.

Among the 70 pedestrian improvement projects installed and implemented over the last year, the types of improvements ranged from installing a radar sign to monitor and indicate drivers' speeds, to installing brand new crosswalks, to updating existing crosswalks with new features like those at Linn and Chestnut.

DOTE staff identified the projects after soliciting feedback from Cincinnati's 52 neighborhoods, according to the May 30, 2019 memo. Criteria for selecting projects included a requested improvement's proximity to a school, rec center, elderly housing or other community gathering place; known pedestrian volume at the location; areas in neighborhood business districts; or crash history or reported speeding issues.

Of the locations improved over the last year, DOTE indicated only five of those requests were made explicitly for speeding or crash incident history, with another eight spots tapped for speed radar signs without indicating whether they were speeding hot spots.

The ultimate goal of the Pedestrian Safety Fund, officials said, is to increase visibility and awareness, but with finite funds, it can only go so far.

"New signage and freshly painted crosswalks are helpful tools because they can alert (and) remind drivers to be mindful of pedestrians in the area. With that said, while these tools certainly help enhance pedestrian safety, no engineering solution alone can change driver behavior."