Work will stretch from Reading Road to Dalton Ave. 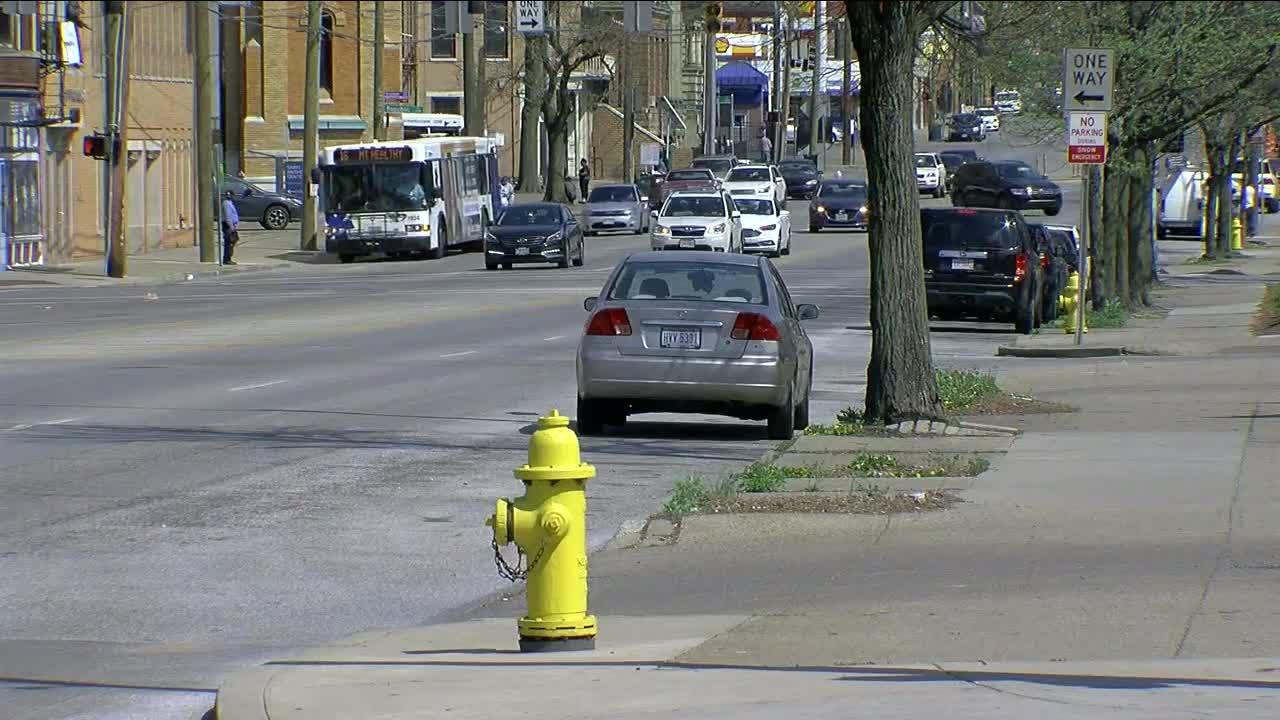 After years of back and forth, crews broke ground this week on what will become a new Liberty Street connecting southern and northern Over-the-Rhine.

CINCINNATI — Karen and Brad Hughes have owned their cookware shop, Artichoke, on Elm Street next to Findlay Market, for the last four years, and they've lived in Over-the-Rhine for the last eight.

Eight years is also about how long they've been waiting for big changes to nearby Liberty Street, the spine of the neighborhood. This week -- as traffic to OTR's bars, restaraunts and retail storefronts has gone quiet during the coronavirus outbreak -- crews moved ahead on those long-awaited improvements to the busy road that for decades has divided Over-the-Rhine in two.

"There's a perception that there is a huge gulf between the two (halves) because, when you get to Liberty Street, if you walk up that way, it's very, very intimidating," Karen Hughes said. "Cars are going fast. If you walk from Washington Park and come up Pleasant Street, there's not even a crosswalk."

Their hope is that a more pedestrian-friendly Liberty Street will mean, when local shops are able to reopen, visitors will find a neighborhood where it's easier to cross back and forth between its northern and southern halves.

Not a 'straight path'

Cincinnati City Council last spring approved a plan to redesign Liberty Street with the primary goal of reducing traffic crashes and making it safer for people walking, biking and driving to and through the neighborhood.

The term "road diet" stems from the plan's aim to narrow the street and slow traffic down.

The street's current configuration includes seven lanes, with two lanes moving in each direction, one center turn lane and a parking lane on each side.

"To be able to get across that big gulf that is Liberty Street, speeding cars -- people need to be able to get back and forth," said Karen Hughes, who, along with her husband Brad, has been lobbying City Hall for the road diet for years.

The new configuration will reduce the road to six lanes, still with two lanes of traffic in each direction and a center turn lane, but just one 24-hour parking lane on the street's northern side. Crews will install curb bump-outs at four major intersections, as well as new pedestrian infrastructure like "pedestrian refuge" medians and new pedestrian lighting and signaling at all eight intersections between Reading Road and Central Parkway.

City Councilman Chris Seelbach has been working to improve Liberty Street since he joined council nine years ago.

"This project has not been a straight path. There have been many obstacles, many times when I thought this wasn't going to happen," Seelbach told WCPO.

Arriving at today's plan came after years of back and forth between neighborhood leaders, business owners and elected officials. Most of the delay centered around worries that narrowing the street would cause even more traffic congestion on the already crowded street, a heavily used street by commuters to get across the city's urban core between Interstates 71 and 75. Maintaining on-street parking for nearby businesses also became a complication.

"Why we would want to eliminate close to 100 spaces on Liberty, when we are severely under-parked, seems to be stubborn for the sake of being stubborn," Cranley said in 2019, when City Council was deliberating between two competing plans for the project.

One of those plans -- championed by Cranley -- would have maintained all seven lanes, including 24-hour parking on both sides of the street and limited the redesign to adding curb bump-outs at the major intersections. The other called for narrowing the road to five lanes and would reserve the two outer curb lanes for on-street parking from 7 p.m. - 7 a.m. and on weekends but open to traffic flow during the day.

At the time of the debate, John Tofaro presided over Chatfield College, which has a campus at the corner of Liberty and Central Parkway. He testified before City Council that losing Liberty Street's on-street parking spaces would be devastating to his students.

"They're overcoming so many challenges already; adding parking on top of them is unconscionable," Tofaro said, saying the majority of his students' parking needs occur between 9 a.m. and 6 p.m., when parking on Liberty Street would be restricted under the five-lane plan.

Finally parking at a compromise

Daniel Souder owns Pleasantry, a wine and coffee bar and bistro located on West 15th Street just south of Liberty. He said parking and traffic flow are his two biggest concerns when a construction project gets underway -- which happens a lot.

Since he opened four years ago, "Things have been constantly under construction around us," Souder said. "Roads have been closed for multiple years, construction dust, things like that... parking taken up.

"(Parking) is always going to be at the forefront of any issue in Over-the-Rhine for the foreseeable future," he said.

Members of council and the mayor viewed the six-lane approach as an acceptable compromise because it narrows the street and shortens the lengths of crossings while maintaining some of the on-street parking. Councilmen Seelbach and Jeff Pastor negotiated the six-lane compromise. Pastor's vote became crucial to the project moving forward after Seelbach could not gather a veto-proof set of six votes in favor of the five-lane plan, which also had the support of the Over-the-Rhine Community Council.

"I like Liberty now because you can park on either side of it for free," Souder said. "So myself, a lot of my staff, that's where we park."

"They’ve made some accommodations that try to adjust and allow for all factors in being able to provide parking for folks at the times that they need parking," Elmore told WCPO. "So we’re in a good spot for that, I think, and our students are happy for that."

Brad Hughes doesn't see the neighborhood as lacking parking; it's just a matter of finding it -- and being willing to walk a bit.

"The issue that always comes up with parking is that people want to be able to park right in front of where they want to go, and if it’s a block over they don’t want to have to walk," he said.

Souder agrees: "If you're patient, and if you're willing to walk a block or two, you will find a place to park." But he added: "Any time we lose parking, it makes it more difficult for us and for our guests to get here. Taking away parking without replacing it leaves some things to be figured out for sure."

The Hughes live next door to Artichoke, after living upstairs for two years. Before that, they lived south of Liberty Street. They saw firsthand how difficult it can be to cross on foot. Brad Hughes said he's almost been hit multiple times trying to cross.

"Liberty Street is designed for moving cars, lots of cars back and forth. It's not really designed for pedestrians," he said.

Seelbach looks back at the road's history as an explanation for why that's the case.

"(OTR) was a community that was cut in two in the 1950s to essentially act as what now is Fort Washington Way -- a connection between our two interstates, I-71 and I-75," he said. "Then Fort Washington Way was built, and we didn't need this seven-lane highway, but we've been stuck with it. So we're going to change that."

Seelbach, Souder and the Hugheses all hope a narrower Liberty Street will stitch the two halves of the neighborhood back together, even if the final result won't be as narrow as some had hoped.

"It's better than nothing," Karen Hughes said. "I would hate to see them not do anything because it's so disruptive. It affects all of our businesses, all of our residents who need to go back and forth between one part of Over-the-Rhine to the other."

She said she hopes the bump-outs and the medians will give at least a look like a narrower, calmer street, even if it's only one lane narrower.

"I think it gives at least a perception that it is narrower and that it’s more pedestrian-friendly," she said. "We just desperately need to have that connection."

Souder believes a narrower Liberty Street will encourage more growth north of the divide, growth that the Hugheses helped spark.

"Getting to Findlay Market and back, as Findlay Market continues to get developed, there'll be more attractions up there, more residential up there."

Construction began Monday near the intersection of Liberty Street and Reading Road. It is expected to continue -- moving westward to Dalton Street in West End -- through January 2021.

Seelbach and Pastor scheduled a joint news conference to kick off the project for Thursday morning at 11 a.m. In order to ensure proper social distancing is maintained, the city is limiting attendance to members of the media and will stream the conference over Citicable.