Brooke Skylar Richardson to authorities in 2017 interview: 'I think I killed her ... I squeezed her' 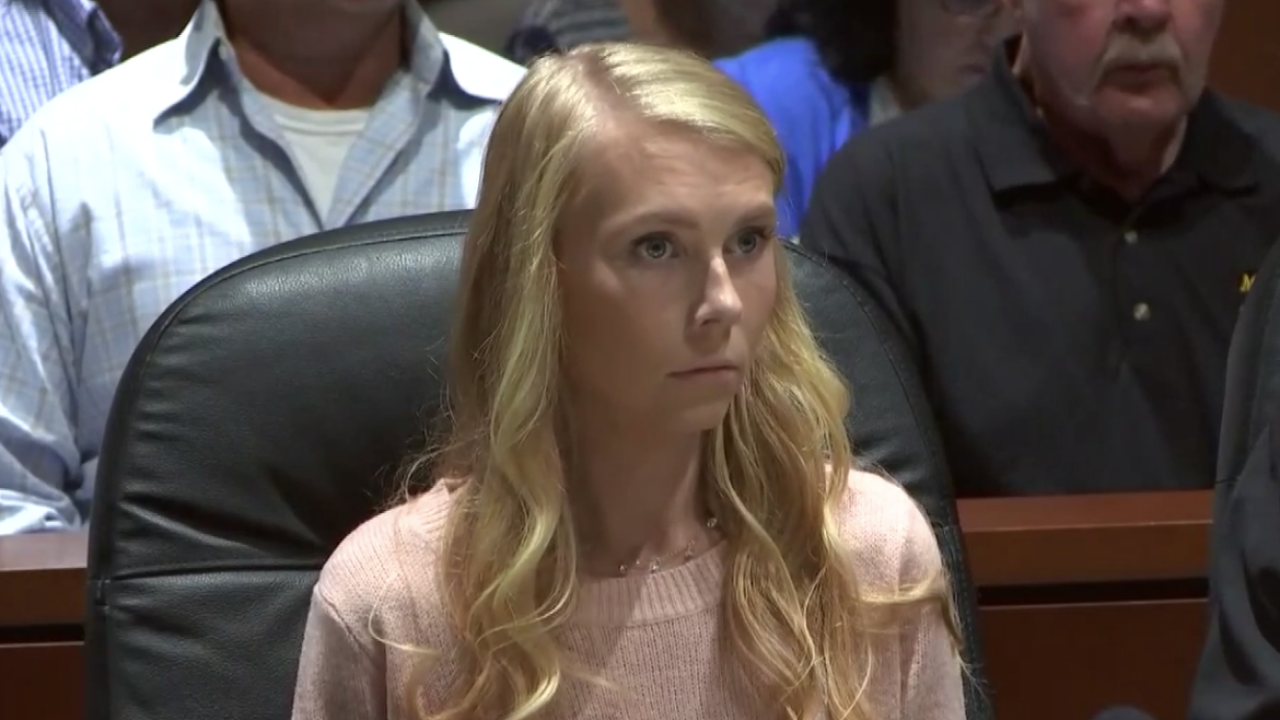 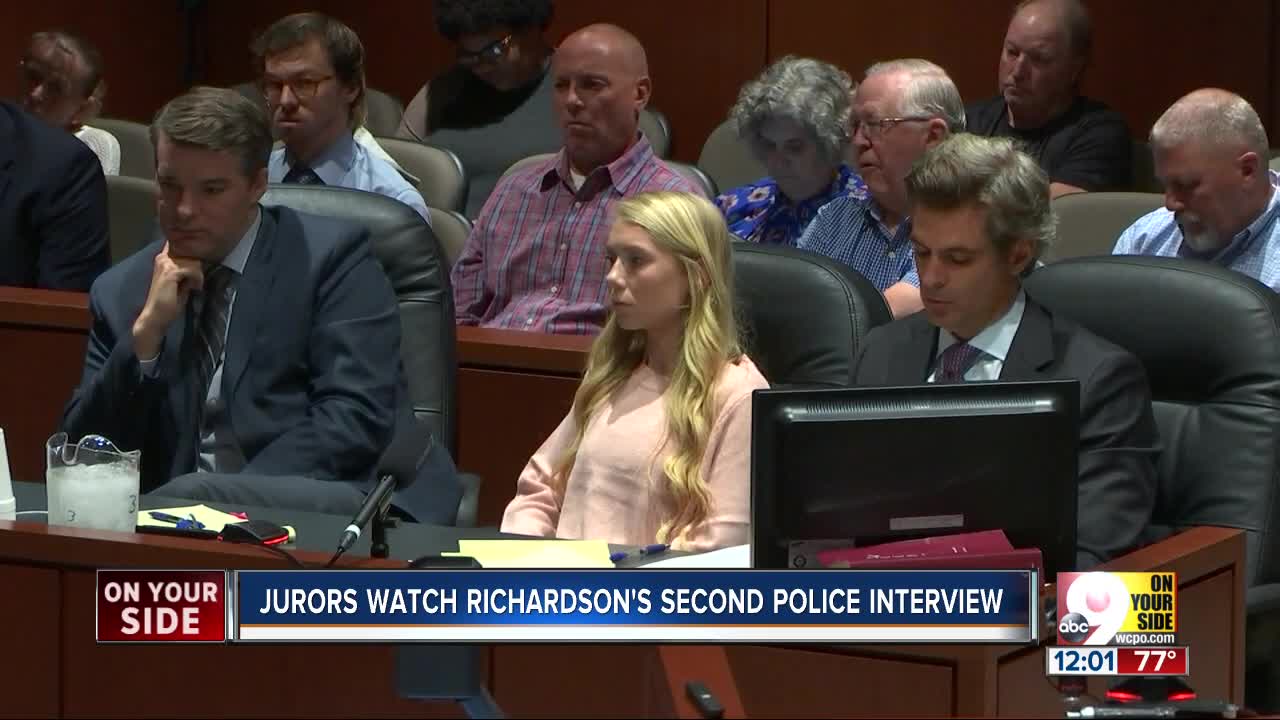 LEBANON, Ohio -- Brooke Skylar Richarson told authorities in a 2017 interview that she didn't think her newborn daughter was breathing after she gave birth on the toilet in the middle of the night. She also said she might have killed her.

“I think I killed her … I squeezed her,” Richardson said. “I loved her.”

Richardson, 20, is accused of killing her newborn and burying her in the backyard of her family’s Carlisle home. Richardson said no one — not even her parents nor the child’s father — knew about her pregnancy.

Prosecutors on Monday showed the jury Richardson's second interview with authorities on July 20, 2017, six days after investigators uncovered the newborn’s remains and more than two months after Richardson gave birth.

Richardson’s defense team says the whole case centers around the second interrogation and what they call a "rush to judgment.”

Richardson was shocked when authorities asked her if she had burned the body. She was adamant, at first, that she hadn't.

Richardson: I buried her.

Richardson: I just held her.

Carter: Tell me about the fire.

Carter: There's some evidence to show that there was some burning on her.

Carter: There's been some charring and stuff on some of her bones so --

Richardson: I didn't burn her.

Carter: Are you sure?

Richardson: I swear on anything.

Carter: Are you sure?

Richardson later told authorities she thought she “could cremate her.”

When her parents, Kim and Scott Richardson, came into the room after a two-hour interrogation, she told them she “tried to cremate the baby just a little.”

“Honey, we still love you, but this is a horrible mess,” Scott Richardson said.

Richardson’s attorney, Charlie Rittgers, said Carter’s 10-page police report doesn’t include what Richardson said about the baby being white and not breathing. It also does not include that Richardson repeatedly denied burning the body or that Murray changed her mind about the charring on the bones, Rittgers said.

Detective Christopher Wong, an expert in digital forensics with the Warren County Sheriff’s Office, retrieved text messages from the phones of Richardson; her mother, Kim Richardson; and then-boyfriend Brandon Saylor.

In text messages from May 1, Kim Richardson asks what “pt pregnant” means in an email she received from Richardson’s OBGYN.

Kim Richardson then goes on to say, in part, “Ur life could potentially be over.” Richardson appears to convince her mother it’s a mistake, based on their exchange of text messages.

Text messages between Richardson and her mother also reveal a shared obsession with Richardson’s appearance, specifically her weight.

In one series of text messages, Richardson tells her mother she “bossed it up with 300 calories on da treadmill,” three days before she gave birth. Kim Richardson responded the next day, saying, “U look amazing.”

Data from Richardson’s phone also showed she took a photo of her stomach the afternoon after she gave birth. She took pictures of her stomach on her phone over the next three days.

Wong also found April 17, 2017 searches on Richardson's phone for "what happens at the gyno when your (sic) pregnant." Richardson's doctor confirmed she was pregnant at an April 26 appointment.

Wong said there could have been more data beyond what he was able to retrieve.

The state rested Monday. Defense testimony is expected to begin on Tuesday.

A bailiff on Monday confirmed Richardson's tampering with evidence charge was dropped. Richardson is charged with aggravated murder, manslaughter, endangering children and abuse of a corpse.

Dr. Susan Brown, a forensic pathologist with the Montgomery County Coroner’s Office, testified on Friday the newborn died as a result of "homicidal violence," but Brown said she can’t determine how exactly the baby died. Brown also said she found six skull fractures when examining the remains, and she could not determine when those fractures occurred.

Rittgers said Brown didn't do enough evaluation before making her determination. Rittgers also accused Brown of confirmation bias and alleged she ignored Richardson’s statements to police about the baby being white and not breathing.

Dr. Krista Latham, a forensic anthropologist at the University of Indiana, wrote in a report that the skull fractures occurred after the baby died. Latham said she could not find any trauma that could have contributed to the newborn’s death.

Prosecutors showed the jury Richardson’s first interview with investigators on Thursday. In the video, a tearful Richardson told authorities that she “didn’t really want to have” her baby but she “never meant to hurt her.”

Authorities conducted the first interview on July 14, 2017, more than two months after Richardson gave birth alone in her home in the middle of the night.

Richardson said she didn’t tell her parents she was pregnant, but she knew she was far along when she went to Hilltop Obstetrics & Gynecology in April because she was “really big.” Andrew confirmed she was pregnant at that appointment.