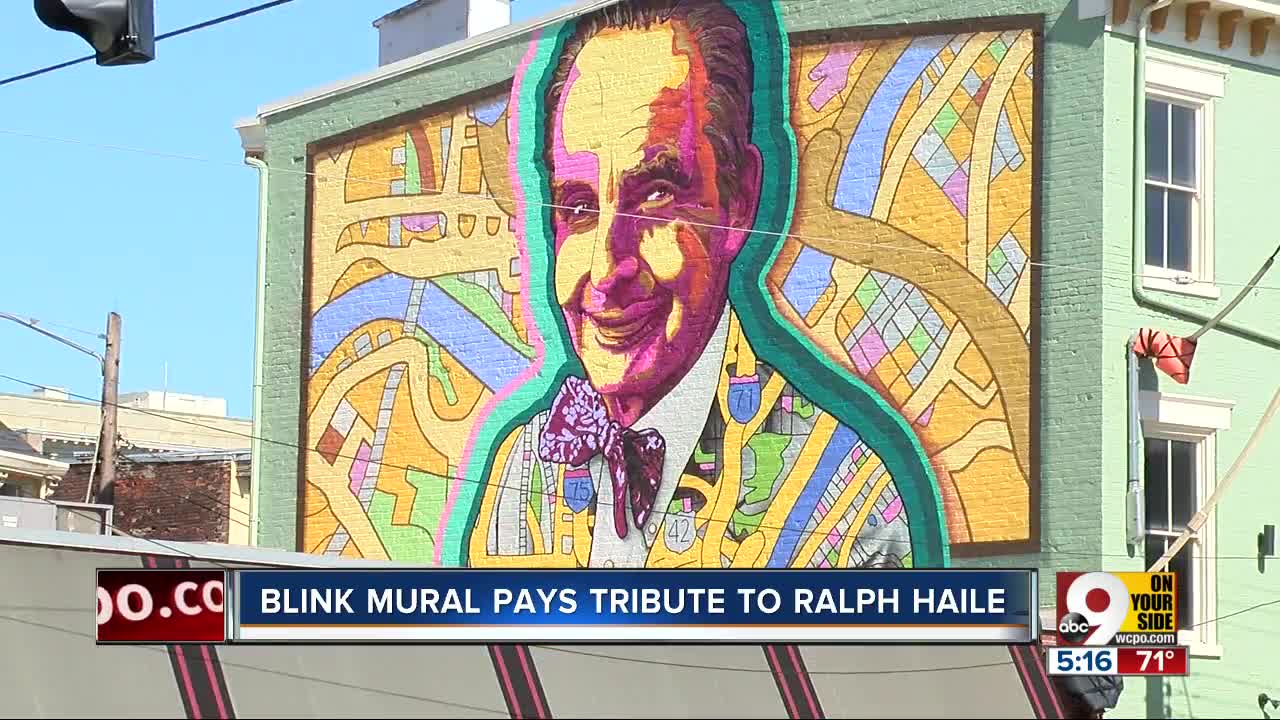 Ralph Haile's family foundation is the driving force behind the multi-million dollar BLINK light and art festival. The foundation saw the opportunity to honor Haile and his contributions to the Northern Kentucky region in the form of a mural that depicts the urban core.

COVINGTON, Ky. — The Roebling Bridge will be a showpiece for this year's BLINK exhibit, but in Covington, a mural will honor the man who made the four-day festival possible.

A picture of banker and philanthropist Ralph Haile, depicted against a stylized map of the region's urban core, now welcomes everyone entering Covington on Pike Street. It even features his signature bow tie.

"He started wearing bow ties when, as a young banker, his tie would get stuck in the teller drawer," Haile Foundation CEO Tim Maloney said.

Haile's bank was just around the corner in what is now Ralph Haile Square at Sixth and Madison. He wasn't a Kentucky native, but he helped push revitalization and riverfront development in the area. His family foundation is the driving force behind the multi-million dollar BLINK art and light festival.

"I think what's gone on in Covington with the hotel and all the development that was sparked by that is probably the best thing to happen to Covington in 100 years, and I think Ralph would be enormously proud," Maloney said.

The mural was painted by NKU and ArtWorks Cincinnati alumnus Christian Dallas.

"This is definitely a dream job," Dallas said. "When I graduated school, I never thought I would be able to paint a huge mural that would be part of such a huge event."

His local ties helped get him the job painting the mural.

"I titled it 'The Ripple of Ralph,' and that kind of pays tribute to all the many decisions and planning things that Ralph did in his lifetime that have a positive effect on the area," Dallas said.

More than one million people could see the mural as part of the BLINK exhibit Oct. 10-13.