BLINK 2019: Here's what will be new when the light and art festival returns 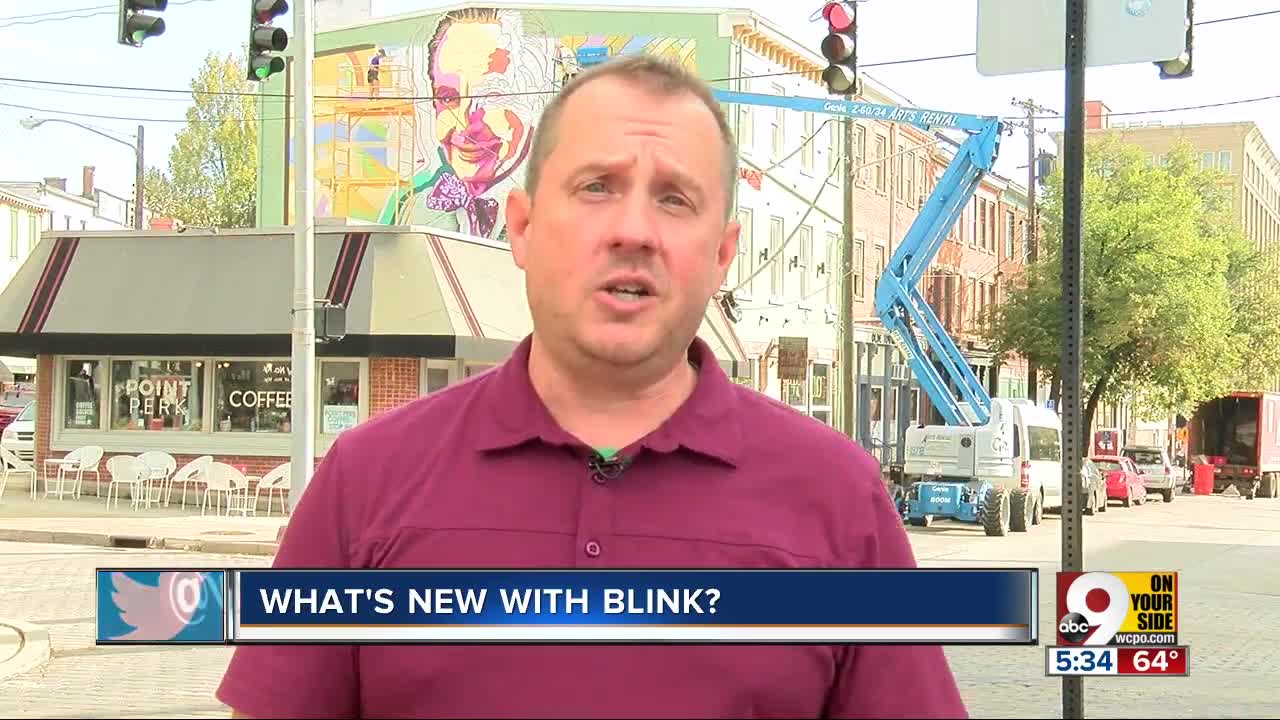 Here's what will be new when BLINK returns 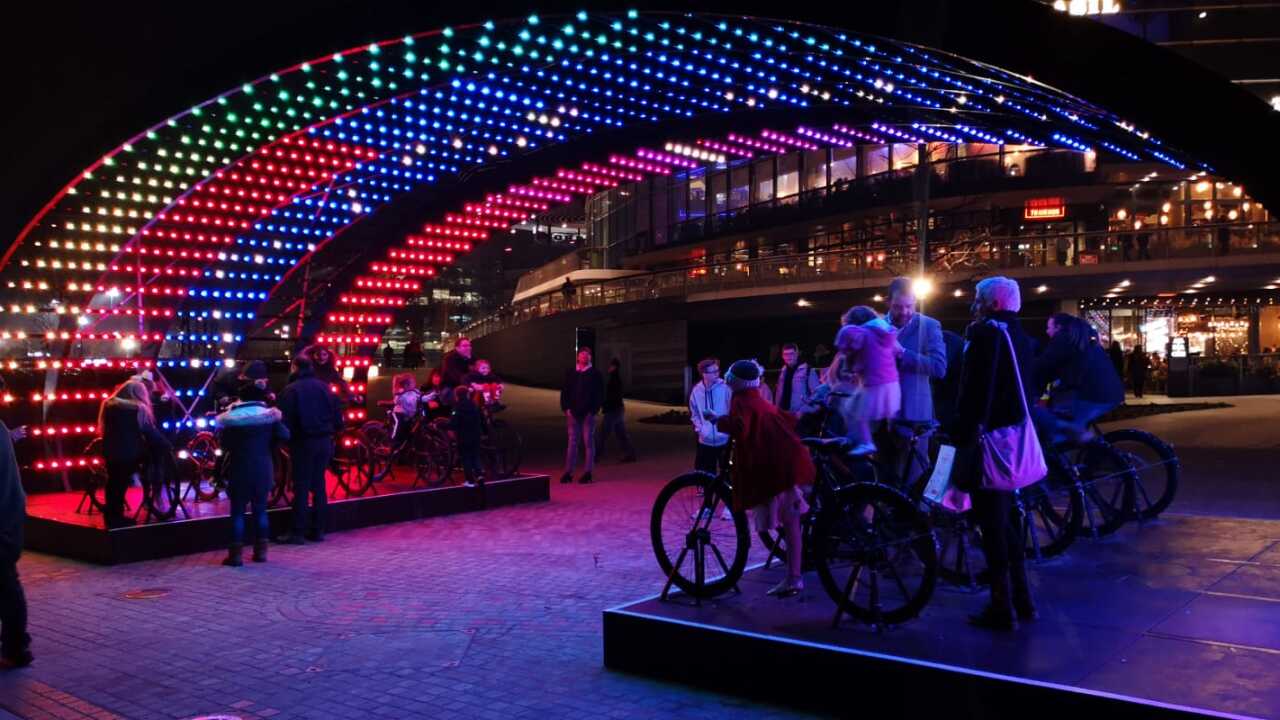 CINCINNATI — When BLINK returns to the Queen City this Oct. 10-13, the light and art festival promises to be bigger and better than the inaugural event two years ago.

The festival's original organizers -- the Cincinnati USA Regional Chamber, AGAR, Brave Berlin, ArtWorks and the Haile Foundation -- along with new presenting sponsor ArtsWave guarantee that BLINK 2.0 will wow crowds in all new ways.

“BLINK 2019 is totally different than BLINK 2017," said Brendon Cull, chief operating officer for the Cincinnati USA Regional Chamber. "From a scale perspective, it's going to be much bigger."

The first thing organizers revealed about BLINK 2.0 was their plan to expand the festival into Covington. The new "Covington Zone" will begin at the John A. Roebling Suspension Bridge and roughly follow Madison Avenue south to Pike and Seventh streets.

The Covington Zone will add approximately 10 more city blocks to this year's BLINK, which will in turn include more than 40 interactive art installations and 11 new murals.

Organizers also announced early on plans to turn the Roebling Bridge into one of BLINK's centerpiece installations in order to connect The Banks and Covington zones.

“Rumble, the Roebling Sings” promises to dazzle crowds through the combination of colored interactive light mapping, natural sound and an original score.

“The Roebling Bridge is going to be something I don’t think anybody will ever forget as long as they live,” Cull said.

Other new light projections such as “re:Fraction” on Fountain Square, which Fifth Third Bank is creating in partnership with Brave Berlin, also promise to stun crowds.

“I don’t want to give too much away, but it’s going to be amazing,” said Doug Sackin, principal innovation design technologist for Fifth Third. “The people in it are sort of a bit of the art and they are going to cause the art to change. It’s interactive.”

And while a few of the same buildings featured in BLINK 2017 will be part of this year’s festival, Cull said the light projections mapped onto them will be all new.

THE INTERACTIVE ART INSTALLATIONS AND MURALS

Most of the art installations and all of the murals that act as breadcrumbs connecting each of BLINK's zones also will be new this year.

People will be able to interact with the Rainbow Bridge, a 15,000-pound, 27-foot-high installation with over 25,000 LED lights. (That’s almost one mile of LEDs.) There also will be new permanent murals by artists such as New York-based Saya Woolfalk throughout all five BLINK zones.

Woolfalk and many other artists' murals will be brought to life through a special light projection created in partnership with Brave Berlin.

Even the Architects of Air will bring a whole new luminarium when the European art troupe returns to Washington Park this year. The 2019 luminarium will comprise a brand-new design titled “Dodecalis” — a reference to an obscure botanical term describing flowers in the daisy family.

For those who did not visit the original luminarium in 2017, think of it as an inflatable bounce house made of multiple rooms that change color based on the sunlight shining through its nearly translucent plastic walls.

The luminarium is BLINK’s only paid or ticketed event, and it will close each night before the other displays take center stage.

The Future City Spectacular Parade will again kick off BLINK. But what makes this year’s parade, which will include thousands of individuals decked out in LED costumes, different is its location and leader.

Rock 'n' roll legend Bootsy Collins led the first BLINK parade on Race Street from Findlay Market to inside Washington Park. This year, famed chef Jean-Robert de Cavel will lead the parade along a new half-mile Downtown route that starts near Garfield Place on Vine Street and ends just in front of the National Underground Railroad Freedom Center on Freedom Way at The Banks.

This year’s BLINK will include more than 80 entertainers performing on six stages each night.

Click here for the full schedule of entertainment taking place on each stage.

In addition to daytime tours of the luminarium, there are a few other new attractions that will give people something to do before BLINK lights up each night.

“BLINK Think Tank” sessions will take place Thursday-Sunday in each of BLINK's five zones. The sessions will give people the opportunity to meet some of BLINK's artists during 30-minute events each day.

The Contemporary Arts Center will offer its own chance to meet BLINK artists during the inaugural “Cinema at the Center: BLINK Festival” event from 3-6 p.m. Oct. 11. The mini-film festival will feature screenings of the London Police’s “Dogumentary” and Gabriel Carrer and Angus McLellan's “Underbelly.” All three artists have work featured in this year’s BLINK. The CAC will host a question-and-answer session with the artists after each screening.

Doors Open Cincy 2019 is another daytime BLINK event. The Architectural Foundation of Cincinnati is organizing this free event, which will celebrate architecture, design and history by providing behind-the-scenes access to approximately 20 BLINK locations in and around Over-the-Rhine. The event will take place 10 a.m.-4 p.m. Oct. 12 and requires registration. For more information and to register visit www.eventbrite.com.

The Second Sunday on Main event in Over-the-Rhine will feature extended hours and special BLINK tie-ins for October. For more information visit www.secondsundayonmain.org .

The city of Cincinnati will close many streets surrounding the Cincinnati Bell Connector streetcar route each night of BLINK. That means no more frustrated drivers foolish enough to try and drive the BLINK route -- that brought traffic to a standstill in 2017. Those closed roads this year also should give pedestrians more room to walk. As a bonus, rides on the streetcar will be free each night of BLINK.

As mentioned before, the Roebling Bridge also will be closed to vehicular traffic at certain times during the week of BLINK.

Both BLINK merchandise and VIP packages are currently for sale on the light festival's website.