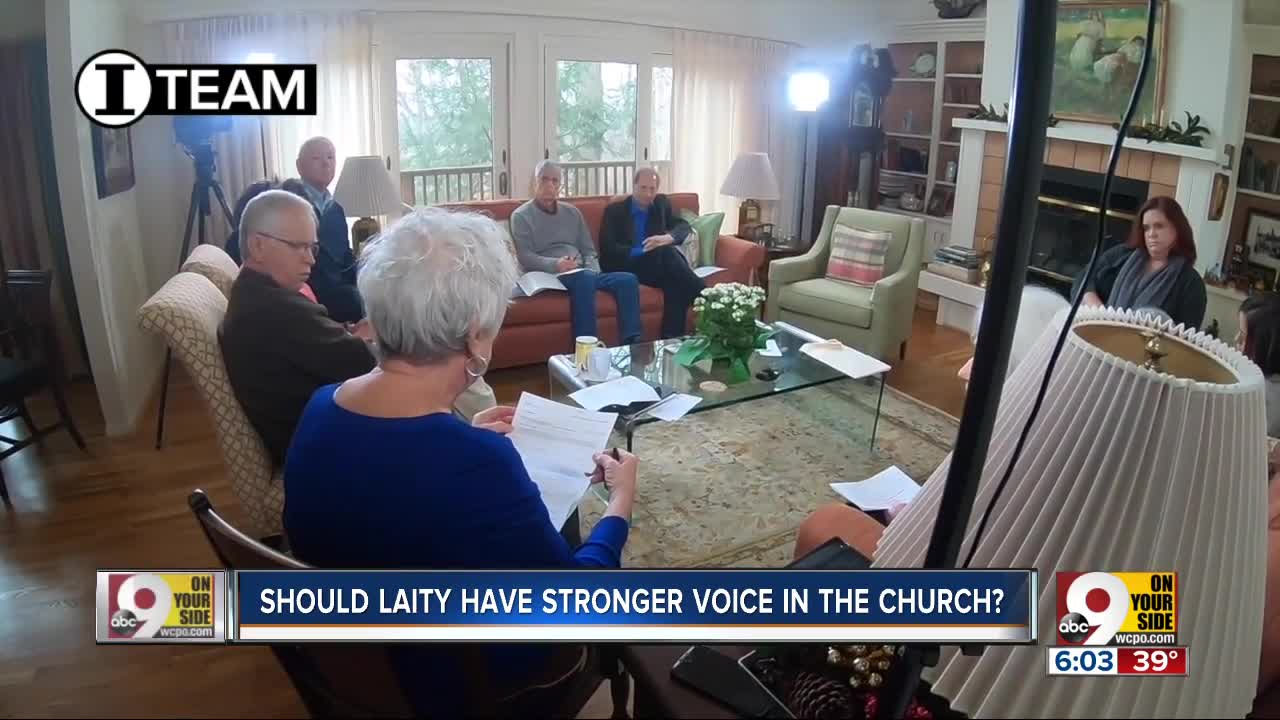 Gerry Ahrens fought back tears as he described his frustration with the Archdiocese of Cincinnati .

"We're just a voice crying in the wilderness," said the retired Catholic school teacher. He is also a survivor of sexual abuse at the hands of a Jesuit priest.

"They're not listening," Ahrens said. "They don't hear us."

Catholic laity in the Tri-State and across the country are determined to be heard by the church hierarchy.

In December, two local groups - Beyond the Scandal and Concerned Catholics of Cincinnati - discussed their progress and plans for reforming the church.

Their organized effort is part of a growing national movement dedicated to increasing the influence of non-clergy in dioceses across the country.

"The person in the pews has to wake up and realize that we have a rightful role that we must play in the church," said Jan Seidel, a longtime Catholic lay leader who hosted the December meeting at the home she shares with her husband, Bruce.

The need for a deeper and more direct role for an increasingly disillusioned laity has also been a focus for the National Review Board created in 2002 by the United States Conference of Catholic Bishops to collaborate with the USCCB in preventing the sexual abuse of children.

In a Nov. 13, 2018 special report to the Body of Bishops, NRB Chair Francesco Cesareo told bishops "the faithful and the clergy do not trust many of you."

"They are angry and frustrated," Cesareo wrote. "Their distrust will remain until you truly embrace the principles of openness and transparency."

In a statement, the Archdiocese of Cincinnati said Archbishop Dennis Schnurr is aided by many groups that involve laity, including the Department Directors, which consists of six lay people and three clerics who meet weekly with the archbishop to assist him in operations.

The archdiocese says a lay review board meets regularly to examine possible violations of the Decree on Child Protection. The review board includes a psychologist, a social worker and an abuse survivor.

Schafer said the archdiocese allowed Drew to 'self-report' his behavior, even after Butler County Prosecutor Mike Gmoser told the archdiocese it should monitor Drew and keep him away from children based on previous complaints about Drew's repeated inappropriate conduct with boys.

The archdiocese also failed to tell leaders in the St. Ignatius parish and school about concerns related to Drew.

Later in August, a man alleged Drew had sexually assaulted him decades ago when he was a 10-year-old altar boy. The alleged abuse happened at St. Jude Catholic Church in Cincinnati where Drew was the minister of music before he became an ordained Catholic priest.

Drew was charged with nine counts of rape and is being held in the Hamilton County jail on a $5 million bond. He has pleaded not guilty.

Parishioners from St. Ignatius, including Teresa Dinwiddie-Herrmann, helped collect nearly 1,300 signatures on a petition sent to The Vatican asking Pope Francis to investigate the archdiocese's commitment to the Decree on Child Protection and how it handled concerns about Drew's behavior.

“It is apparent our Archdiocese ignored alarming claims by parents by allowing Drew to be around children.” said Dinwiddie-Herrmann in a news release announcing the petition.

In October, the I-Team discovered Father Daniel Pater had been the director of music at St. Simon of Cyrene Episcopal Church in Lincoln Heights for the previous six years, even though he had been removed from active ministry as a Catholic priest after he admitted to sexually molesting a 14-year-old girl when Pater was a priest in the early 1980s.

Since Pater is still a priest, the archdiocese is responsible for supervising him, but it did not answer the I-Team's questions about Pater.

The local Episcopal diocese said St. Cyrene's pastor fired Pater the same day the I-Team told her about his past. Pater didn't respond to requests for comment.

"Mind-boggling," said Ahrens as he recalled watching the WCPO report in November.

Despite his personal hope for change and the dedication of his friends, Ahrens told the I-Team he's not optimistic the archdiocese will allow laity to help drive meaningful structural reform.

"I would say in my heart of hearts, no. But that doesn't mean I've got to stop fighting," Ahrens said.