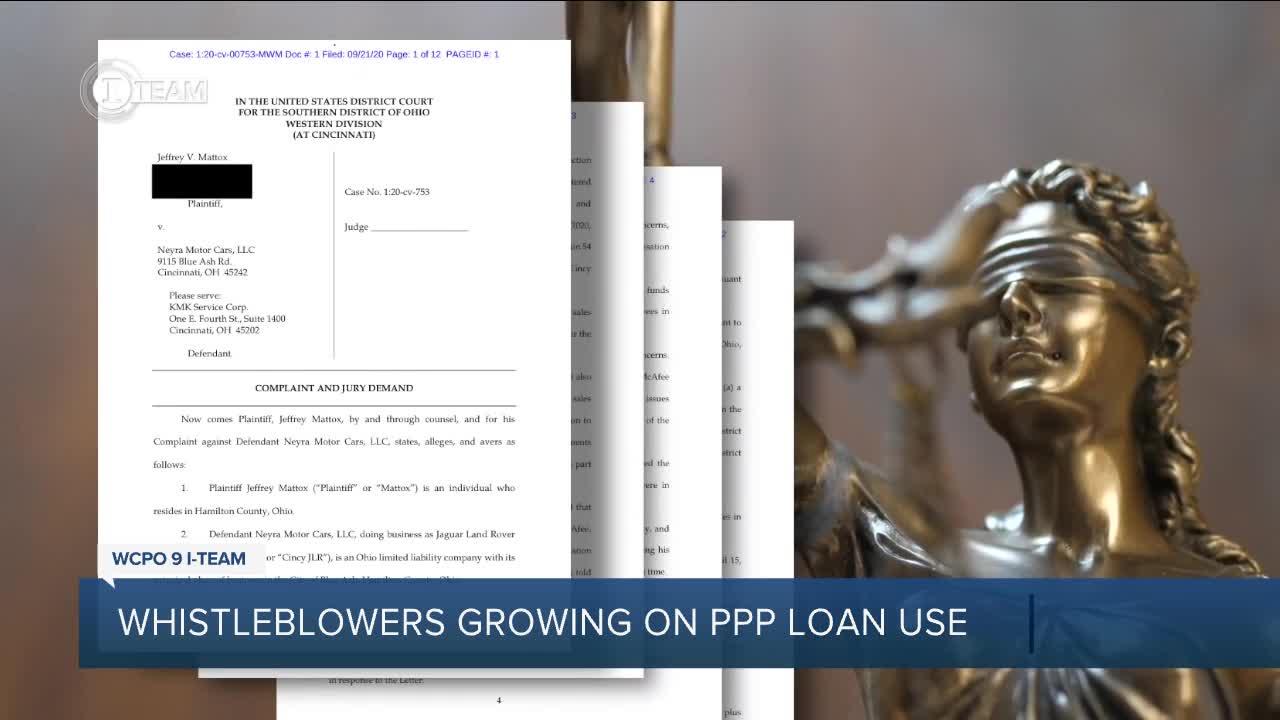 When Jaguar and Land Rover Cincinnati got a Paycheck Protection loan in April, it sparked a controversy that landed in federal court last week.

BLUE ASH, Ohio — A luxury car dealership in Blue Ash is accused of using its Paycheck Protection Program loan as an excuse to cut employee compensation in a federal lawsuit filed by a former salesman.

In the Sept. 21 complaint, Jeffrey Mattox alleges he was fired for objecting to “potentially fraudulent activity” at Jaguar and Land Rover of Cincinnati. The lawsuit alleges the dismissal violates Ohio law and the federal False Claims act, which protects whistleblowers from retaliation.

The dealership’s owner, Ed Neyra, told the WCPO I-Team that Mattox’s August firing “had nothing to do with PPP,” and said its handling of the small-business rescue loan was proper.

“The problem is they don’t understand it,” Neyra said. “I can guarantee you we went by the rules. I’m proud of what we do and how we do it.”

The dealership is one of four Neyra companies to receive Paycheck Protections loans worth up to $3.35 million in April, according to records from the U.S. Small Business Administration. The records show Neyra Construction Inc. was approved for a loan April 3, followed by Neyra Industries Inc. April 9, Neyra Motor Cars LLC April 10 and Neyra Interstate Inc. April 27.

Neyra Motor Cars is the named defendant in Mattox's complaint against the Blue Ash dealership.

PPP loans tough to get for Cincy's minority-owned firms

According to the lawsuit, the dealership altered its sales-commission policies in April, when it secured a PPP loan through the Small Business Administration for an amount between $350,000 and $1 million. Mattox claims he and others “began to see ‘settle up’ statements that reflected ‘Paycheck Protection’ funds being deducted from their commissions.” He claims the company refused to explain the practice when employees objected. So, he hired a lawyer to force the issue.

Attorney James Papakirk sent a letter on Mattox's behalf, identifying him only as a sales employee. The August 18 letter sought answers to determine whether the practice complied with state and federal laws.

“Without further explanation, one can only assume for a couple of reasons that these deductions are being made illegally,” Papakirk wrote to Ginny McAfee, a manger with the dealership, in a letter that was included as an exhibit in the lawsuit. “First, we are not aware of any signed writing from the employee authorizing this deduction. Second, and equally concerning, it would appear that the company is improperly recouping from employee funds that it likely received through PPP.”

Two days later, Mattox was fired for “several pretextual reasons,” according to his complaint, which demands in excess of $75,000 in “lost pay and benefits” plus punitive damages.

Papakirk said he and Mattox could not comment about the case. Neyra declined to comment in detail about his use of Paycheck Protection proceeds.

“We had consultants. We had lawyers that showed us how to do it because we didn’t want to get into this mess,” he said.

An expert on Paycheck Protection loans told the I-Team he “can’t think of a reason” for a company to do what’s alleged in the complaint.

“There is nothing in the Paycheck Protection Program that says you should be deducting funds from your employees’ paychecks,” said LJ Suzuki, who works as a part-time chief financial officer for several small businesses through his Denver-based startup, CFO Share. “The program is designed to make sure you keep paying your employees the same amount or more, not less. So, if an employer is paying you less and they’re saying it’s because of the Paycheck Protection Program, there is something implicitly wrong there.”

The complaint also comes at a time of increased whistleblower activity caused by COVID-19, said Jennifer Pacella, an assistant professor of business law at Indiana University’s Kelley School of Business.

“Many entities are going through really hard times financially and it’s leading to maybe more rationalization than usual, desperation for funding,” she said. “And that’s an area that’s really ripe for unlawful behavior.”

The Securities and Exchange Commission revealed in May that it received more than 4,000 whistleblower complaints in the first three months of the coronavirus outbreak in the U.S., a 35% increase over the same period last year. The agency’s co-director of enforcement, Steve Peiken, told an SEC enforcement conference that the agency has “opened hundreds of new investigations, many COVID-19 related, but many in other traditional areas.”

Pacella said the trend could be fueled by an increase in the number of employees working remotely.

“The typical disincentives to blowing the whistle don’t really exist as much now because people are kind of distanced from their offices,” she said. “They might feel a little bit more comfortable (reporting bad behavior from home) instead of facing a supervisor face to face.”

Although Mattox’s lawsuit is not a whistleblower complaint, it does rely on the federal whistleblower statute as the basis for its employment claim that Mattox was wrongfully terminated. Pacella said the claim appears to have merit, partly because it won’t be necessary for Mattox to prove the dealership used Paycheck Protection funds improperly in order to collect on his employment claim.

“We don’t know if there was fraudulent activity happening with the COVID-retaliated loan,” Pacella said. “As long as this particular employee can be proven that he had a reasonable belief of fraudulent behavior, he will be protected from retaliation regardless.”