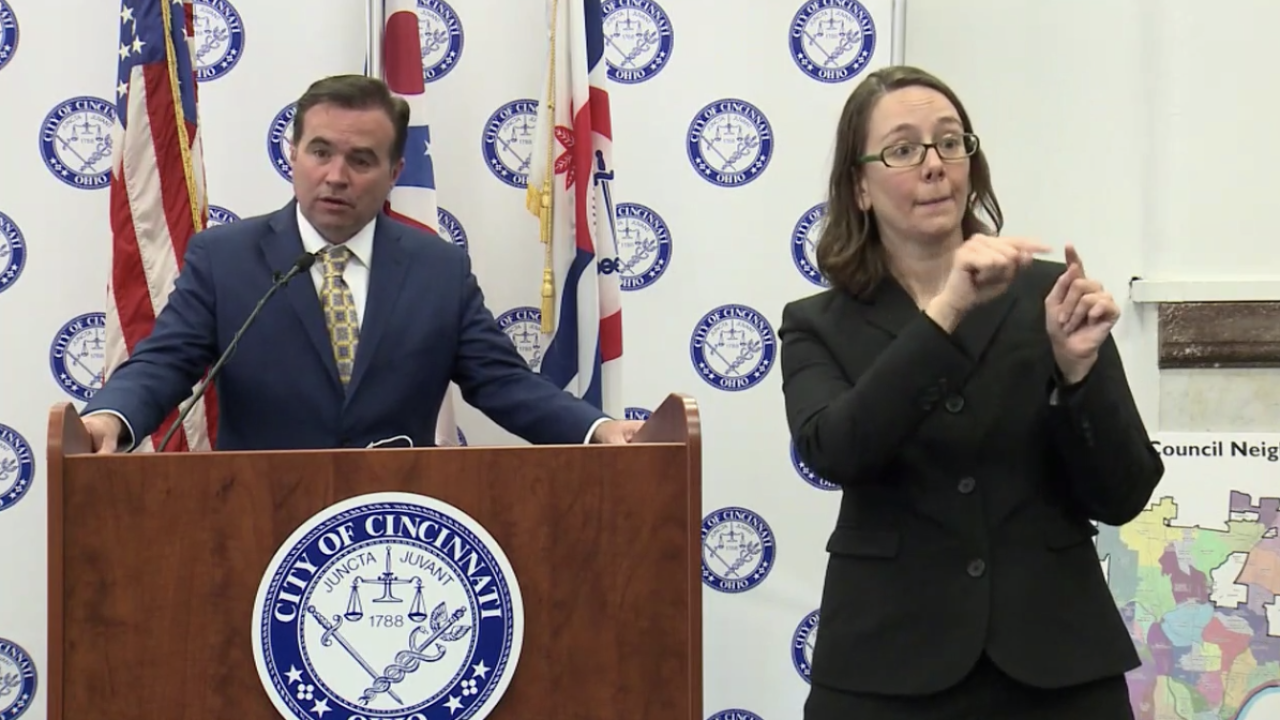 Copyright 2020 Scripps Media, Inc. All rights reserved. This material may not be published, broadcast, rewritten, or redistributed.
Michael Benedic
Mayor John Cranley held a press conference on Sunday, May 31, 2020 to discuss the weekend&#39;s protests over the Minneapolis police killing of George Floyd.

The extended curfew comes the morning after a Cincinnati police officer narrowly escaped a bullet. The bullet hit the officer's ballistic helmet as Cincinnati police worked to disperse a "disorderly crowd" near the University of Cincinnati at 12:23 a.m. Sunday. The officer was not injured.

Cranley issued an Emergency Order on Sunday afternoon, which says the curfew will be in effect from 9 p.m. to 6 a.m. due to “destruction and violence” in several areas of the city over the weekend. The city of Newport followed suit, announcing a curfew across the river from 9 p.m. until 4 a.m. St. Bernard Police also announced they plan to enforce a curfew mirroring Cincinnati for Sunday and Monday night.

Watch Cranley's news conference in the player below:

As protests of the Minneapolis police killing of George Floyd spread to Clifton Heights Saturday night, the damage spread there, too. Front windows were busted out at Adriatico's, a popular pizza place, and Mr. Tuxedo on West McMillan Street.

But overall damage did not appear as widespread as Friday night, when numerous windows were smashed and a few businesses were looted in Over-the-Rhine and Downtown.

Isaac said everyone who was arrested Saturday night for violating curfew had been warned that they needed to disperse.

A WCPO analysis of arrest records from Saturday's protests found 24 people were arrested who lived outside Cincinnati. The analysis identified 88 arrests that specifically mentioned the protest.

Additionally, 17 of the defendants identified were under age 20. Most defendants had no prior criminal charge in Hamilton County. Some have long records, including additional active disorderly conduct cases.

It will be a challenge to enforce the curfew across the entire city, Isaac said.

“(With) 52 neighborhoods, this is a city of over 300,000 people. It will be very difficult for us to enforce this citywide,” Isaac said. “We will give priority to where we have problems.”

Only people that have essential reasons to be out — people working, medical personnel, etc. — are permitted to be out past 9 p.m. in Cincinnati.

The curfew goes into effect tonight at 9 p.m. in all 52 neighborhoods. Only individuals who must be out (ex: essential work) can be out after 9 p.m. CPD will first give warnings to anyone in violation of the curfew.

Cranley said he and City Manager Patrick Duhaney rode along with police Saturday night and witnessed a number of arrests made at Liberty and Vine Streets.

He said he also saw unrest at Cincinnati Police Department Headquarters, including people who made a “clear attempt to provoke an overreaction from police.”

“I think it’s relevant to point out, that the activities that we found the most frightening and most scary, as we sat there, were by white people,” Cranley said. “There were a number of white people in the crowd that were clearly engaged in coordinated activities.”

Cranley said he witnessed several people separate from the protest and walk around D1 as if they were casing the building.

But by 8:30 p.m. protesters had gathered at Cincinnati Police Headquarters, and Isaac said he gave an order to deploy pepper spray when he saw some people were trying to pry open windows “with what appeared to be the intent to place something inside.”

Isaac said rocks and bottles were thrown at police officers throughout the night, and this continued as the crowd moved into the city’s Corryville and CUF neighborhoods.

Just before 1 a.m., officers were in a line formation at E. McMillan and Ohio Avenue when a shot was fired. The round went through a Cincinnati police officer’s shield and struck the center of his helmet.


“This is … there are these individuals who have decided that they will attempt to take the life of an officer. And I believe that’s what this was,” Isaac said.

Isaac said the officer thought he had been hit with a rock until he realized a bullet had hit his helmet.

No arrests have been made in the shooting. Isaac placed the officer on administrative leave.