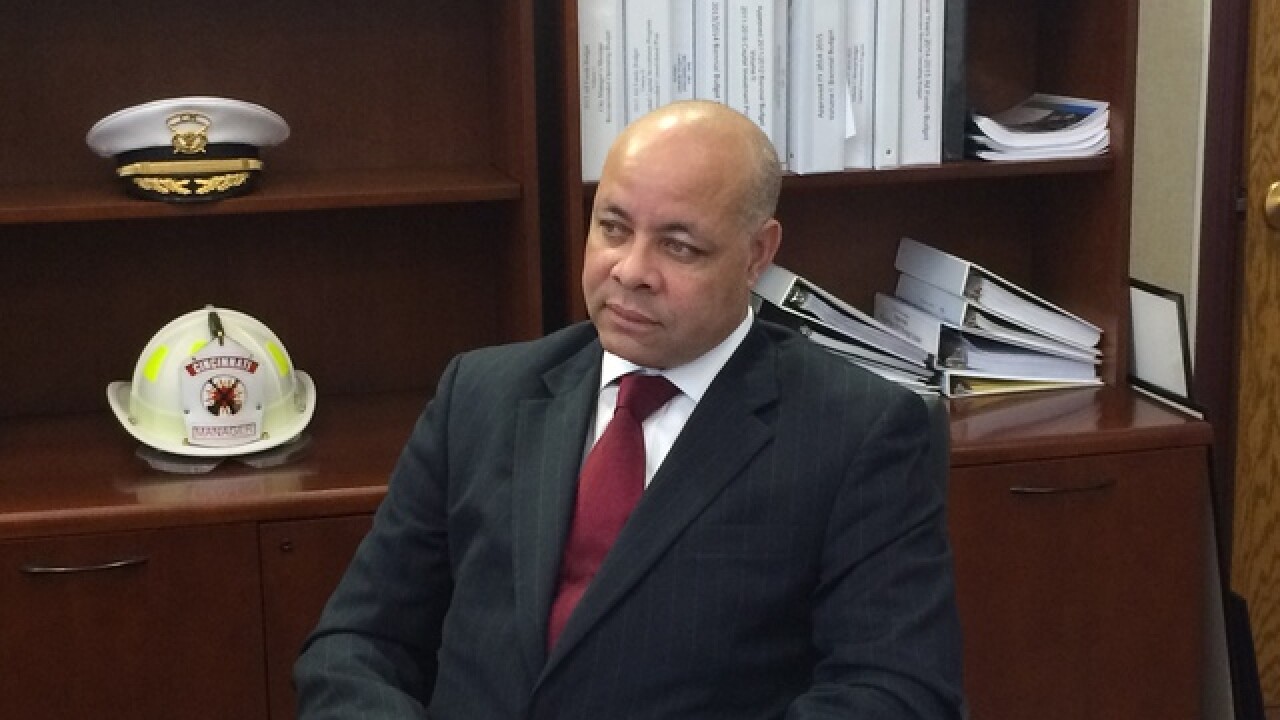 WATCH a complete wrapup of Saturday's drama at City Hall in the video player above:

He also hinted he might sue, meaning the weeks-long acrimony that has engulfed City Hall could continue.

Instead, they accepted his resignation 5-0 and appointed Assistant City Manager Patrick Duhaney to fill the city's top job until a permanent manager can be found. Duhaney became assistant city manager in February and has worked for the city since 2009.

In his notice to Cranley and city council, Black said he wasn't "surrendering any of my legal rights" by resigning.

"I have made this decision based on the reality that the work environment has become very hostile, and as such untenable," Black wrote in a memo. "Therefore, it is in my best interest to extricate myself, in that this hostility is unlikely to cease."

Cincinnati City Council previously approved an eight-month severance package for Black on the condition that he resign by April 30. That deal gives him $174,000 in salary, $6,000 in attorney fees and health insurance for the eight months.

"I have had a good working relationship with the manager and wanted to part ways with respect, and I think that we did that today," Smitherman said.

A statement from Harry Black, who today submitted formal notice of his resignation as City Manager of the City of Cincinnati. The move will go into effect today at noon. pic.twitter.com/Xk5naIQHb9

I am glad the city manager chose to leave city service voluntarily which I believe is in the best interest of the City and his family. I wish him the best in his future endeavors.

Injustice continues to reign at city hall under Cranley. Black was forced to resigned today but the community will have its say.

Black said last month he'd like to stay "for as long as the Mayor and Council will have me." He had support from a majority of the council until Thursday. That's when Councilman Greg Landsman announced he had changed his mind and would vote with four others -- Smitherman, Councilman David Mann, Councilwoman Amy Murray and Councilman Jeff Pastor -- for Black's termination if he didn't resign.

Landsman said Black, who released a scathing memo against the mayor Wednesday afternoon, wasn't "fully focused" on solving problems at the city's long-troubled 911 call center. That service came under more scrutiny since 16-year-old Kyle Plush suffocated to death in his Honda Odyssey despite making two 911 calls.

"Yesterday at council, a week after this horrific thing ... I was hoping that the city manager would say, 'This is where we are, this is the work that we're doing, this is the steps that we're taking,'" Landsman said. "He said, 'Nothing at this time.'"

In a statement Thursday, Landsman said officials promised to get the call center's problems fixed.

"We continue to be distracted by the ongoing saga surrounding the manager and mayor," he said. "A new city manager alone will not end the dysfunction, or solve our 911 issues, but it's an important next step."

Outside council chambers Saturday, Landsman said Black's resignation should be "a turning point" for everyone involved.

"We have a lot work ahead of us, even during this transitional period," Duhaney said in a statement. "I will work hard for the people of Cincinnati as we enter into this budget season and continue our work on all fronts to address the concerns related to our 911 system."

Mann said Friday that removing Black would not delay solving the 911 issues since "it's like we don't have a city manager now" -- alluding to Black and Cranley's ongoing feud. The two men volleyed allegations across the handful of steps between their offices: That Black had been abusive and retaliatory toward city employees and talked about visiting a topless bar in mixed company; and then, the latest -- that Cranley had mixed his campaign fundraising with the city's economic development deals.

Cranley said Black's retaliation continued this week, though he wouldn't provide any specifics. Asked about his own management style, Cranley pledged to be more collaborative.

More than a month ago, Cranley and Black had agreed to an 18-month severance package, valued at $423,000. That deal never got support from a majority of council members: Dennard, Landsman, Seelbach, Sittenfeld and Young said they found it irresponsible to taxpayers. The five texted each other about their joint statement; that conversation is at the center of a lawsuit that they violated Ohio's open meetings law.

WCPO caught up to  Dennard on Saturday and asked her reaction.

“He was in a tough situation,” Dennard said.  “He was either fired or forced to resign, so I feel like he did what was best for him."

Cranley hired Black, who was working as the city of Baltimore's finance director, in 2014.

Under Black’s leadership, technology use expanded dramatically in Cincinnati. Now citizens can report potholes or broken sidewalks and track snowplow progress from an app on their phones.

Black also helped lead the city through major events such as Major League Baseball’s All-Star Game in July 2015, as well as two tragedies that year with the deaths of Firefighter Daryl Gordon and Police Officer Sonny Kim.

He also helped keep peace in the city after the shooting death of Sam DuBose by former University of Cincinnati Police Officer Ray Tensing, when he was sitting in his car during an off-campus traffic stop in mid-July 2015. Fears of riots gripped the city when the dramatic video of the shooting was released to the public, and also after the deadlocked jury verdict in the Tensing trial in November 2016.

But in recent months, Black's relationship with Cranley has soured -- putting the men on a near-daily war path with one another.

Going forward, the leaders of the local Republican and Democratic parties hope everyone in City Hall can stop bickering and get back to work for the city.

"It's like watching your children fight in public," said Maggie Wuellner, executive director of the Hamilton County Republican Party. “Honestly, I don't have much hope for the Progressive Five as we call them, that are having secret meetings via text. Better than the law, quite frankly," she said.

Wuellner hopes the next city manager can unify and lead City Hall.

"We need someone who can unify our council, work with our mayor, and stop the fighting, stop the bickering. Someone that can be a good leader, that can bring everyone together and get some things accomplished,” Wuellner said.

Tim Burke, chair of the Hamilton County Democratic Party, said the council can start by working collaboratively to hire  the next city manager.

"We have a real opportunity to get beyond some of the battles that have taken place now. They have to jointly make a decision on a city manager,” Burke said. “And I hope they will take this opportunity to work together to get that done.”