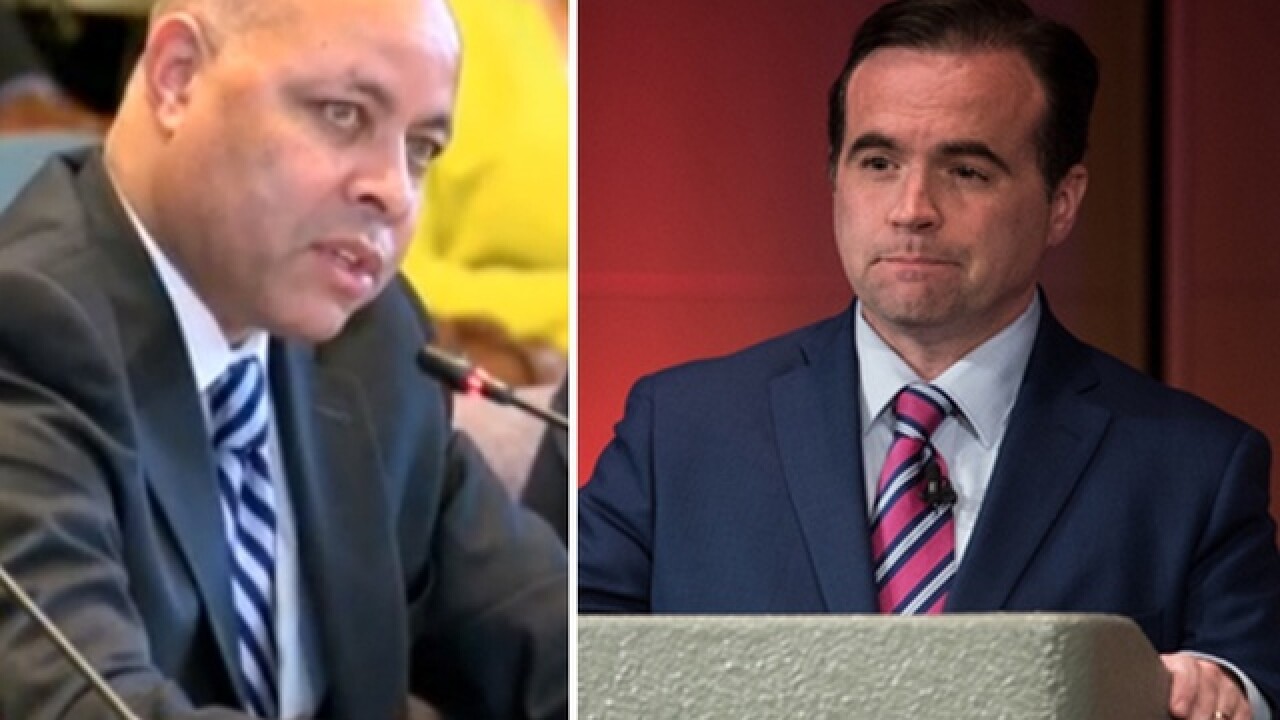 Copyright 2017 Scripps Media, Inc. All rights reserved. This material may not be published, broadcast, rewritten, or redistributed.
<p>Harry Black and John Cranley</p>

CINCINNATI -- Mayor John Cranley said his efforts to oust City Manager Harry Black are related to Black's "long standing practice of calling myself and other city leaders enraged at night."

Black's late-night phone call March 8 to Cranley spurred the mayor to ask for Black's resignation the next day. He threatened to "obstruct city business" that night, according to Cranley, who offered no further specifics about the call.

"The phone call was offensive and unprofessional, but it is the fact that he then followed up on his threats with official action that I find inexcusable," Cranley said in a lengthy statement released Friday.

Black's office did not immediately respond to request for comment Friday afternoon.

Cranley's desire to remove Black from the job is unrelated to leadership changes in the police department, as was widely believed, he said in the statement.

The mayor also said he plans to propose legislation next week to hire an independent, third-party counsel to "conduct interviews and prepare a report for council and the public."

For weeks Cranley has planned to bring forward roughly a dozen employees to testify against Black at City Hall.

But a majority of city council -- all Democrats -- gave that idea a cold reception. Those council members, instead, had called for an outside investigator to review complaints against Black and present findings.

An outside investigator, Councilman Chris Seelbach said this week, would "depoliticize" the situation.

Three of the city's largest public labor unions, representing about 4,000 employees, came out Saturday in support of that plan. Union attorney Chris Jenkins said the city manager "should lead by example and abide by the same rules that apply to all other employees."

"The City Manager’s public statements acknowledge conduct that would, at minimum, subject any other City employee to discipline," Jenkins' statement said. It was sent on behalf of the American Federation of State, County and Municipal Employees, Cincinnati Fire Fighters Union Local 48 and Cincinnati Organized and Dedicated Employees.

Cranley said Black has a habit of making late-night phone calls, similar to the one he says he received from the city manager on March 8. "In fact, I have since learned that Mr. Black made several other similarly abusive calls to City leaders that night and week," Cranley said.

This isn't the first time someone has accused Black of making a tense late-night phone call. Last fall, police union president Dan Hils filed a grievance about a call he said Black made at 11:40 p.m.

Cranley said other employee union representatives also told him they they and some of their members "have been mistreated and would like to share publicly their complaints." He didn't specify who or how they were "mistreated." The mayor did previously accuse Black of making other city employees uncomfortable by discussing a stop in a topless bar during a city-funded trip to Denver.

"Combined, the multitude of stories from various departments paint a picture that can't in good conscience be ignored," Cranley said.

On Thursday, the city council voted to approve an eight-month severance package for Black if he resigns by April 30.