If The Banks breaks ground on concert venue this spring, outdoor music and tailgating here by 2019 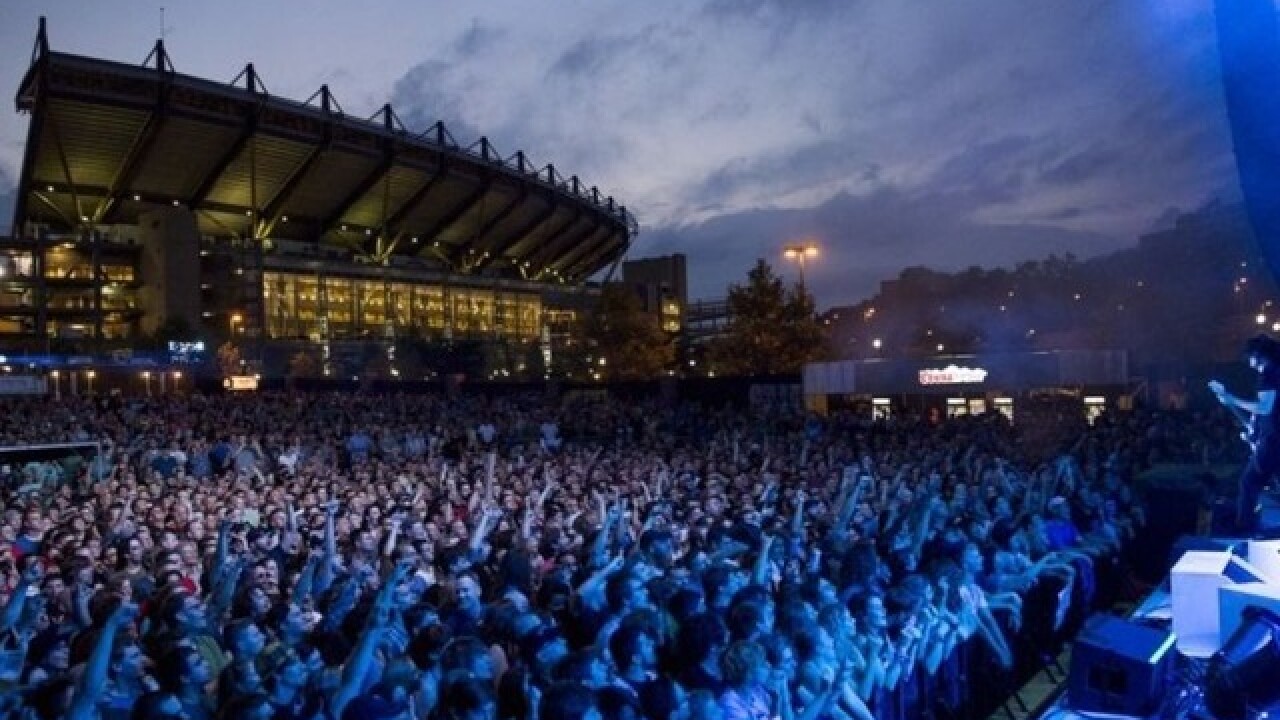 Copyright 2018 Scripps Media, Inc. All rights reserved. This material may not be published, broadcast, rewritten, or redistributed.
<p>An outdoor concert at Stage AE in Pittsburgh, built in 2010 by PromoWest, is similar to the venue it wants to bring to The Banks riverfront. Photo by PromoWest.</p>

CINCINNATI -- After two years of talk, Hamilton County leaders say this could be the year they finally break ground on a new concert venue at The Banks.

Construction on an indoor and outdoor facility will begin as soon as March, according to county records WCPO obtained. The proposed $20 million concert pavilion could start hosting concerts in 2019.

It’s been more than two years since concert promoter PromoWest Productions first pitched the idea of building the venue on the city’s riverfront.

But little happened to turn the plan into a reality – until recently.

“We’re actively working on structuring a deal that makes sense,” said Tom Gabelman, the attorney who represents Hamilton County on The Banks project.

Although PromoWest initially proposed building the concert venue, it's unclear whom the county is working with on the deal. PromoWest declined comment for this story.

A new concert venue might be a godsend for The Banks, which has shed more than seven restaurants over the last two years and is without a developer to lead new projects.

The lead developer pulled out of the project in July, after missing two deadlines to start The Banks' third phase.

City and county taxpayers jointly own the land on The Banks, and over the last decade have invested more than $135 million to reshape the city’s riverbank.

The Banks has had its successes: An upscale AC Hotel by Marriott opened there in November, General Electric Co.’s global operations center has brought nearly 1,400 workers to the city, and visitors flock to Smale Riverfront Park.

Other progress, however, has been slow.

Blocks of land remain empty at The Banks. Taxpayers funded a garage that was supposed to be the foundation of new development two years ago, yet nothing has materialized.

But a new concert and performance event center, expected to attract more than 350,000 people each year to 150 events, could pump new visitors into the riverfront development that currently struggles to attract big crowds outside of football or baseball game days.

According to county documents, the venue would be constructed to the south of Paul Brown Stadium. Gabelman, however, told WCPO that the county and city are considering multiple locations at The Banks for the venue.

“(That) is a project that I believe we can advance, need to advance, and is long overdue in advancing at The Banks,” said Hamilton County Commissioner Todd Portune.

County leaders have requested $5 million from the state’s capital budget to pay for a new parking garage, which would support hundreds of cars at the concert venue.

It’s unclear if any other taxpayer money will be requested for the project, or who, exactly, will be in charge of it.

The idea for a concert venue at The Banks first surfaced in January 2016, when Mayor John Cranley touted PromoWest's plan to build an indoor and outdoor facility as a way to energize the development by bringing in 300,000 to 400,000 concertgoers each year.

In past interview with WCPO, Scott Stienecker, the CEO and president of Columbus-based PromoWest, outlined his vision for Cincinnati.

For The Banks, Stienecker planned to construct a 2,400 general admission indoor facility and a 5,000 person outdoor facility. Bigger shows would play outside from May to September, while the venue would host smaller shows inside from October to April. The venue could be used 365 days a year.

“That means 180 events would be coming to The Banks that are not coming there right now,” Stienecker said in a January 2016 interview. “It would be huge for the restaurants and bars.”

Stienecker has been in the music business since the beginning of his career and operates the Bunbury Music Festival in Cincinnati.

After building his first indoor and outdoor concert pavilion in Columbus in 2001, and another near Heinz Field in Pittsburgh in 2010, he turned his attention to Cincinnati in 2013, hoping to build at The Banks.

In addition to the 110 concerts PromoWest hosts in Pittsburgh and Columbus yearly, it also hosts 45 private events at each site, from championship boxing, extreme fighting challenges, casino nights, trade shows and awards banquets.

On football Sundays in Pittsburgh, PromoWest's Stage AE is open to a huge tailgating party for Steelers fans with free bands.

“We’d do same thing if we were at The Banks for the Bengals,” Stienecker said in a 2016 interview.

Just as PromoWest didn’t ask for public money in Columbus or Pittsburgh, it would privately fund a concert pavilion build in Cincinnati, Stienecker said in a 2016 interview.

“We don’t utilize any public funding whatsoever," he said. "We’re entrepreneurs who took a risk, and it paid off."

Although The Banks is without a developer, Portune said the county intends to – and can – move forward on the concert venue without one.

The pavilion’s location doesn’t interfere with the bid that city and county leaders have submitted for Amazon to locate its second headquarters at The Banks, either.

“It’s about the one thing we could do that would not interfere with the whole Amazon application, but continue with what we’re trying to accomplish at The Banks,” Portune said.

How many should lead The Banks project next?

A new developer will be needed, however, to lure new businesses to other empty lots at The Banks.

Public leaders broke ground on a new parking garage in 2015, hoping a new development would soon be built atop the garage.

But the former lead developer, Atlanta-based Carter Developments, never built anything. Instead of a new building or park, concrete blocks and metal stakes poke out of the garage.

A new development team will be in charge of building out that plot, along with other land at The Banks.

Cincinnati Mayor John Cranley doesn’t want just one lead developer to be in charge of the project.

Instead, he wants multiple developers who, he hopes, will bring different ideas to the table and move faster on the decade-old project.

“A lot of people felt that once a developer has that much land under contract, and has exclusive rights to it, their motivation to get something done diminishes,” Cranley told WCPO. “(Carter) had (The Banks) all locked up for a long, long time.”

It’s been more than six months since Carter, the county and the city finalized a divorce.

Portune said the county has held off on putting out a request for proposals from developers because of the bid for Amazon’s headquarters.

Cincinnati is one of 238 cities that submitted a bid for Amazon’s headquarters, and Amazon is expected to announce a short list of cities in February.

“The consensus has been that we’re waiting to hear from Amazon before that goes out, because that could dramatically affect The Banks (and) how it could be developed,” Portune said. “Obviously we’ll have lost some time … We don’t want to send any mixed signals to Amazon.”

Gabelman, the attorney working on the project, said the county will consider hiring one lead developer, or multiple developers.

Final approval of the request for development proposals rests with the Joint Banks Steering Committee. The committee is a group of Cincinnati power players who oversee decision-making at The Banks.

The group is expected to meet later this month to officially kick-off the nationwide search for a new development team, Gabelman added.