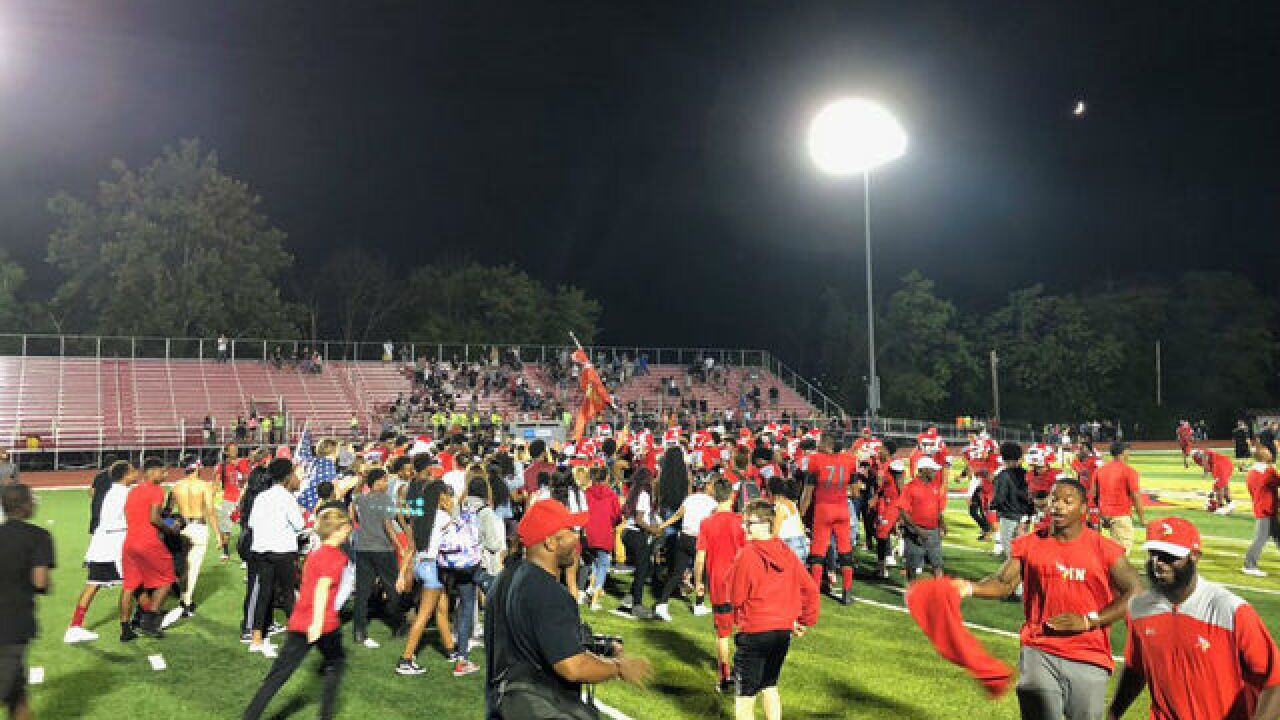 Copyright 2018 Scripps Media, Inc. All rights reserved. This material may not be published, broadcast, rewritten, or redistributed.
<p>Princeton fans celebrate the Vikings' improbable 30-28 win over visiting Lakota East Friday night. With just one second remaining, Hosea Hairston found Jermaine Wimpye in the end zone for a 37-yard touchdown to give the Vikings the win. (Princeton City School District photo)</p>

Players, coaches, school administrators and fans will forever remember where they were at Viking Stadium Sept. 14, 2018.

Hairston and Wimpye - both seniors - continued to savor the moment Saturday morning after Princeton's improbable 30-28 win over visiting Lakota East.

"It was unbelievable," Wimpye said.

The 37-yard touchdown pass from Hairston to Wimpye will be etched into the annals of Princeton athletics history. The game will be discussed for many years to follow.

Wimpye was on his way to the University of Toledo for a recruiting visit Saturday morning. He lost track of how many times he watched the highlight on social media. But, he was very happy with how many followers he gained as a result of his memorable catch.

Though they practice the two-minute drill during the week, Friday was the first time Hairston and Wimpye had been involved in a 'Hail Mary' play at any level of football.

"It was crazy," Wimpye said. "It was kind of like something you would see on TV."

On third down with eight seconds left, the clock went to zero when the ball went out of bounds on a pass, according to Princeton coach Mike Daniels. Lakota East coaches, players and fans rushed the field thinking the game was completed, Daniels said. The fans had to go back to the stands and the players went back to the field.

One second was put on the clock as Lakota East led 28-24.

With Lakota East in a prevent defense and fourth down, Hairston threw to Wimpye in the end zone for the winning score. Wimpye jumped and caught the ball with three defenders around him. He was confident in his ability on that final play because he jumped higher than everyone else.

Before the touchdown, Hairston pulled Wimpye to the side and told him he would look for him in the end zone. Wimpye told Hairston: "'All right, I got you.'"

After Hairston threw the ball to the end zone, he was worried as Wimpye bobbled the ball. Hairston thought his teammate had dropped it. He felt crushed in the moment.

But, it wasn't reality. Wimpye caught the ball. The celebration ensued.

"He created like an unreal moment," Hariston said. "I started going crazy. I hugged him and laid on him. It was a big old dogpile."

Players and students ran onto the field to celebrate with Wimpye in the end zone.

"It doesn't get any better than that," Hairston said.

The highlight quickly made its rounds on social media late Friday night and into Saturday morning.

Daniels, a Vikings alum and former University of Cincinnati standout, admitted to watching the highlight between 15 and 20 times late Friday night into Saturday morning. The former UC wide receivers coach was still incredulous at what transpired.

“I coached in the Sugar Bowl,” Daniels said early Saturday morning. “I was part of the Orange Bowl. I was at Kennesaw State and at [the University at Buffalo]. That was the craziest thing I’ve ever seen and be a part of.”

Hairston threw for 258 yards and four touchdowns. He also rushed for 116 yards on 18 carries.

The final drive started at the Princeton 12 with 1:30 left and just one timeout. Hairston kept his composure and Daniels told him he matured as a quarterback.

Wimpye had seven receptions for 143 yards and two touchdowns. He also has 21 tackles on defense for the season.

Junior defensive end Darrion Henry had 10 tackles (six solo) along with a forced fumble and a fumble recovery Friday night.

Daniels said he let the players enjoy the celebration Friday night and he planned to go through the details of the game with the team Saturday.

“That could mean the difference between a playoff game or not,” Daniels said.

SEE Friday's scores throughout the Tri-State and Saturday's schedule.

Kings senior running back Nak’emon Williams had 221 yards and three touchdowns as the Knights defeated Anderson 35-14. It was the first loss of the season for Anderson (3-1, 0-1 ECC).

“His great night was preceded with his best week of practice this season,” Kings coach Andy Olds said. “I’m very happy for him.”

Loveland snapped a nine-game losing streak with a 24-0 win over visiting Withrow Friday.

Moeller senior RJ Khayo had a memorable night in the Crusaders’ 39-0 win over Lafayette (Ky.). He caught a 70-yard touchdown pass and returned a punt 60 yards for a touchdown in the second quarter. In the third quarter, Khayo had a 90-yard touchdown run. Khayo is third all-time in Moeller history in career receptions. He has 102 receptions for 1,098 yards. Jake Hausmann (2015 graduate) and Tony Harris (2008) are second with 111 career receptions. Monty Madaris (2011) is first with 118 receptions. Moeller (3-1) plays at St. Xavier (2-2) Sept. 21.

RELATED:  Mason coach tells players they made a memory for a lifetime.

How ‘bout them Cowboys?

Wyoming defeated Taylor 55-0 as the Cowboys held Taylor to 12 total yards and no first downs. Wyoming coach Aaron Hancock said the offense was efficient and explosive. Wyoming junior quarterback Evan Prater was 11 of 15 passing for 253 yards and four touchdowns in the first half. He also had two rushing touchdowns in the first half. He played one series in the second half and threw his last touchdown on a screen. Wyoming (3-0, 1-0 Cincinnati Hills League) plays host to Finneytown (2-2, 0-1) Sept. 21.