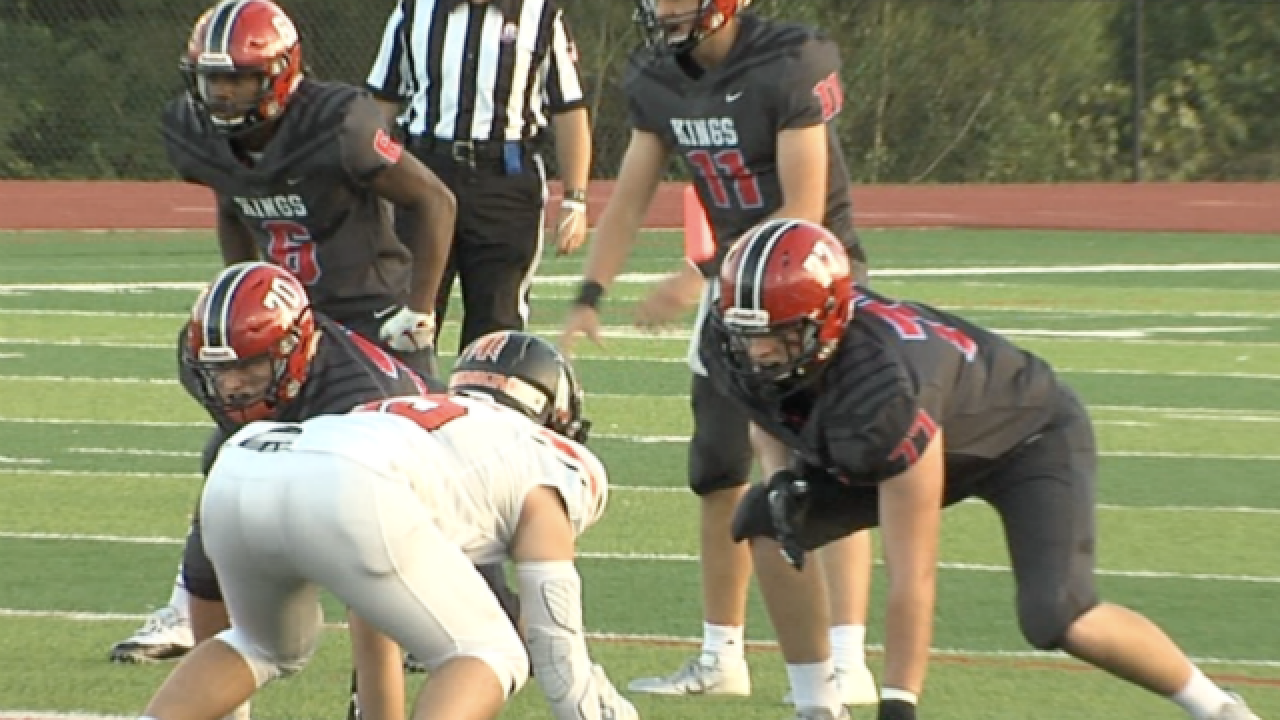 Copyright 2018 Scripps Media, Inc. All rights reserved. This material may not be published, broadcast, rewritten, or redistributed.
<p>The Kings football team is projected to finish No. 1 in Division II, Region 8, according to Shuck. The Knights host Milford Friday night. (WCPO file)</p>

CINCINNATI -- With just three games remaining in the Ohio high school football regular season, there is obviously plenty at stake.

The top eight teams in each region qualify for the postseason while the top four host first round games.

In Division I, Region 4, Moeller's win over Elder Oct. 5 at Nippert Stadium created some change in the projected top eight.

Moeller, the No. 4 seed and winners of the Greater Catholic League South Division title outright for the first time since 2013, is projected to host a first round game.

Milford (6-1) has an opportunity to compete for a home game if it can defeat Region 8 leader Kings (6-1) Friday night on the Knights' home field. The winner would also be in first place in the Eastern Cincinnati Conference.

The Eagles, which made the playoffs in 2017 for the first time since 1986, continue to enjoy a memorable season with meaningful games in October.

"This is a new experience here in Milford," Grippa said. "The fans are packing it in at games. It's been really fun."

"We should have a huge crowd," Olds said. "Looking forward to a great, great game."

If Western Hills (5-2) can defeat visiting Taft (5-1) Friday night, the Mustangs could reach 16-plus points. Western Hills, which hasn't reached the postseason since 2000, is projected at No. 10 but could move up significantly with a win this week.

"The Mustangs are definitely an underdog but if you are on the bubble, you might have some interest in that result," Shuck said.

St. Xavier (3-4) has nine consecutive postseason appearances -- the longest active streak among area large school programs -- but the Bombers have work to do to reach the playoffs again.

The Bombers' projected final number is 15.7, based upon projected wins over Clarkson North (Ontario) Friday night and against visiting Louisville St. Xavier Oct. 26. Shuck projected the Bombers to lose to visiting Cleveland St. Ignatius Oct. 20, but if St. X wins the numbers project to just below 20 and would qualify them in the Nos. 6-7 range.

Unless St. X defeats St. Ignatius, the Louisville St. Xavier result could be the determining factor. Second-level points must also be considered and the Sycamore at Lakota East Week 10 game could also impact St. X.

Winton Woods (6-1), a Division II, Region 8 program, will also have a significant impact on how Region 4 is organized. The Warriors play at Elder (4-3) Friday night.

Besides the Warriors, who are projected No. 3 in Region 8, there is still plenty to be determined around the area in Division II.

Little Miami (6-1) lost at Harrison (4-3) last week and dropped three places in the projected finish. The Panthers, trying to reach the postseason for the first time since 1992, are part of a large group on the bubble with three games remaining. Little Miami needs to win at least two, according to Shuck. The Panthers play host to Ross (3-4) Friday night.

Even if Kings (6-1) loses to Milford Friday night, the Knights are projected to maintain a home game.

Another ECC game to watch closely is Turpin (5-2) at Anderson (5-2). If Turpin wins, the numbers won't change a lot. If Anderson can win, the Redskins' projected final number will climb to around 21.

The Madeira (4-3) at Deer Park (6-1) game will be watched by Divisions V and VI. Madeira is projected at No. 6 in this region in Division V. A Madeira loss will drop its final points total to 12-plus, which is dangerously close to the cut-off spot.

A Deer Park win would be worth more than three points. That would raise their total to more than 16. The Wildcats are projected to be No. 10 in Region 24.

WCPO will continue to update Shuck's projections through the final weekend of the regular season Oct. 26-27. Shuck's information is independent and unofficial. It has no official connection to the Ohio High School Athletic Association computer points.