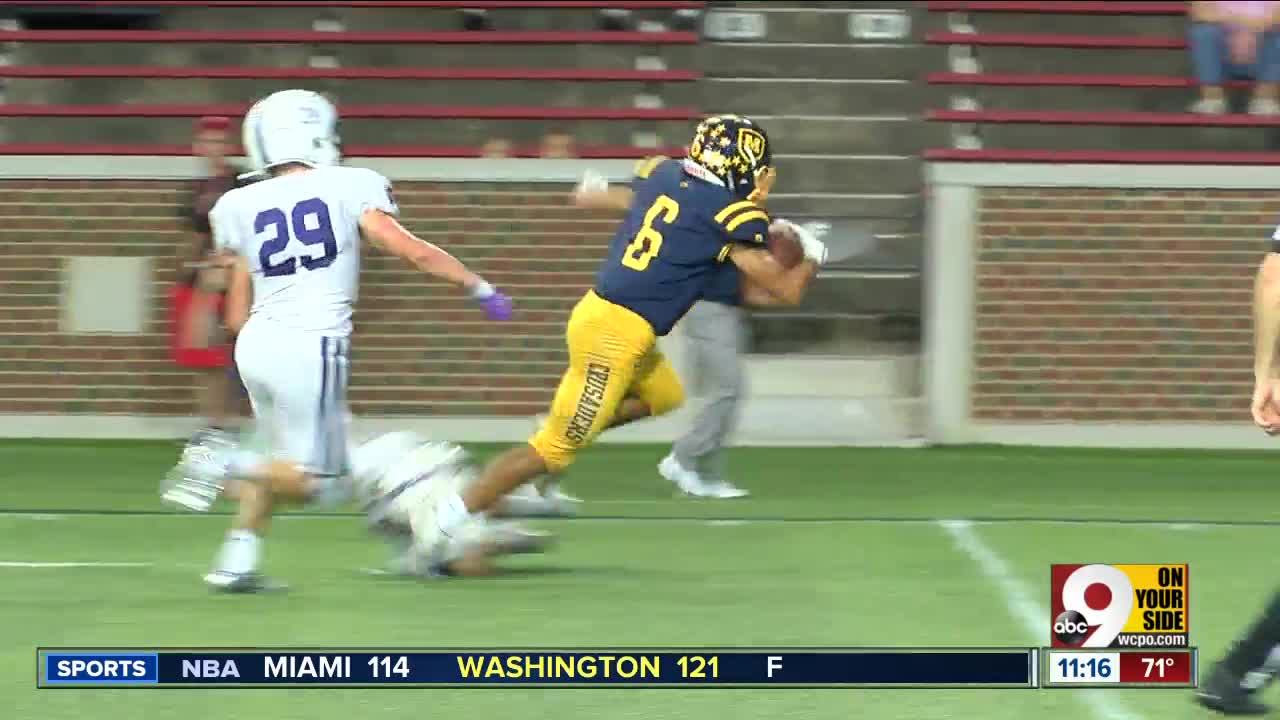 Watch the best high school football highlights in town hosted by WCPO Sports Anchor Ken Broo and Sports Reporter Keenan Singleton. We covered the top games in Ohio, Kentucky and Indiana as well as some small-school battles you won’t see anywhere else. Watch here for for top plays from Moeller vs. Elder, St. Xavier vs. La Salle, Colerain vs. Mason and Winton Woods vs. Edgewood. 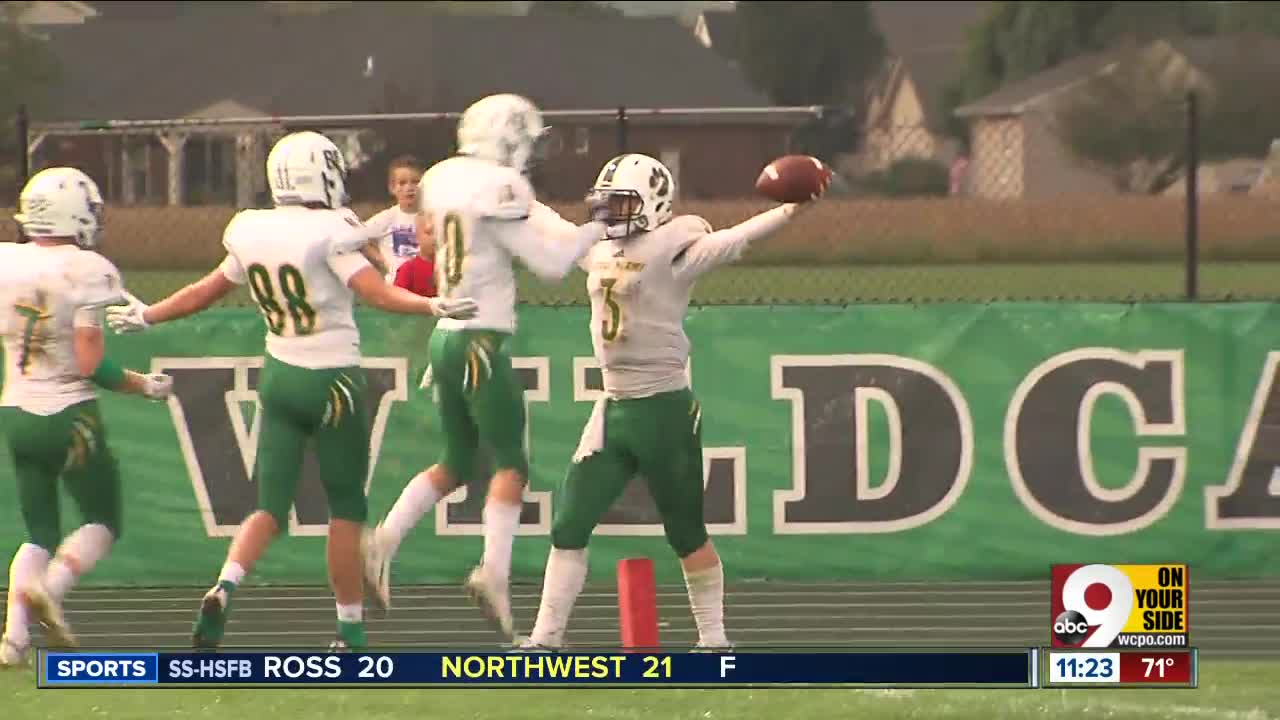 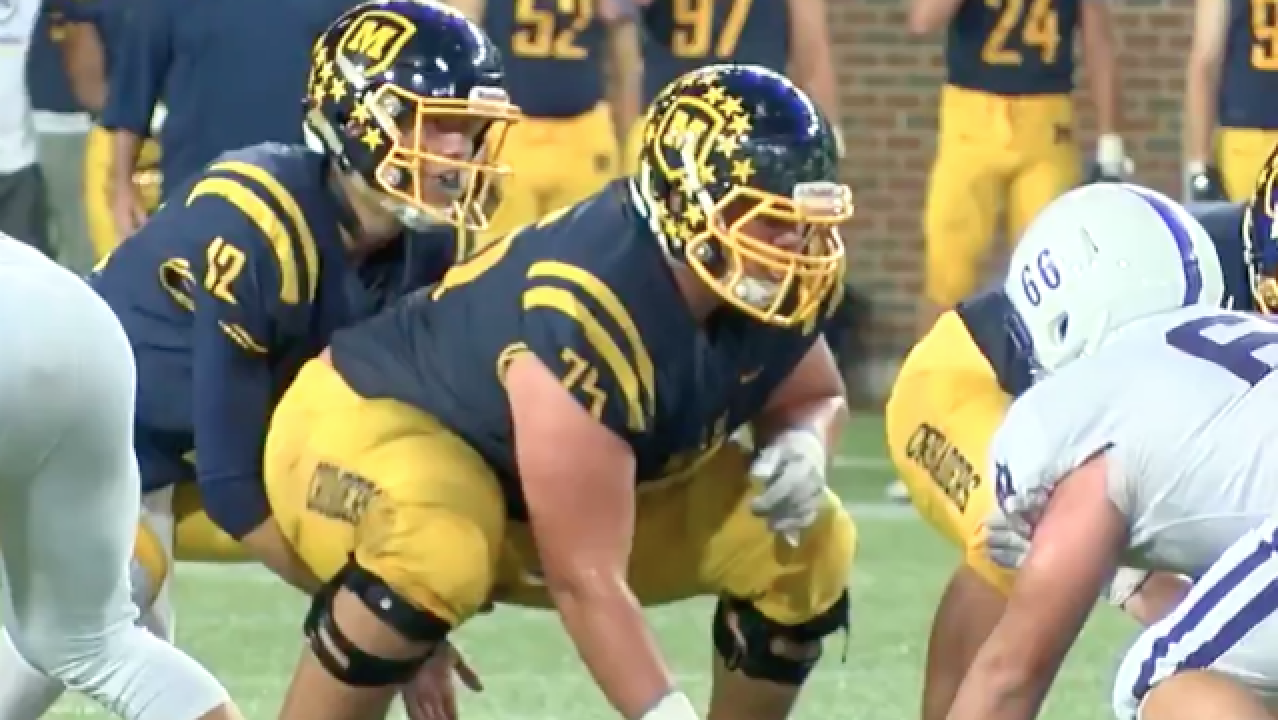 “Right now I am trying to get my kids into bed,” Rosfeld deadpanned.

The Crusaders have an 8:05 a.m. Saturday team meeting scheduled. There will be a hard weightlifting session in the morning. The coaches have to report at 7:05 a.m.

But, Friday night was a cause for celebration. Moeller won the outright Greater Catholic League South Division title for the first time since 2013.

An estimated 200 people waited in the cafeteria for the Moeller players as they victoriously emerged from the locker room.

“We go over the top when we get back to the locker room,” Rosfeld told WCPO. “We’ve got some very fun traditions.”

Moeller rallied in the second half to defeat Elder 24-21 Friday night at Nippert Stadium.

"Our senior leadership is significant," @LetsGoBigMoe Head Coach Doug Rosfeld tells me he didn't have to say much at halftime. The seniors did the talking, and it worked. Big time highlights from @thibodeaux_k with a 43-yard FG, @mitch_mac_11 was on the money. @WCPO pic.twitter.com/4QEsAZFnW2

Rosfeld, a 1997 Moeller graduate who named the Crusaders’ coach in December 2017, became the first coach to win a GCL South football title outright in his first year since Steve Specht (St. Xavier) in 2004.

Rosfeld is also the first Moeller first-year head coach to win an outright title since Steve Klonne in 1982, according to Moeller sports information director Steve Albrinck.

“We have some really good seniors,” Rosfeld said. “We have a really distinct culture that we’ve kind of built around from Day One.”

A week after Moeller defeated host La Salle 21-14 in overtime, the Cardiac Crusaders were at it again at Nippert Stadium – a home game against Elder.

“When it’s down to the wire, we feel pretty comfortable,” Rosfeld said.

Junior Kevin Thibodeaux made a 28-yard field goal to give Moeller a 24-21 lead over Elder with 2:14 left. That proved to be the difference.

Then, sophomore running back TJ Rotello scored on a 1-yard touchdown run to tie the game with 8:34 left.

Senior wide receiver RJ Khayo had six receptions for 86 yards for the Crusaders.

One of the leaders of the team, Szabados had 35 tackles (25 solo) through six games. He was able to be with the team at halftime Friday night.

“It meant a lot to the guys," Rosfeld said. "He’s an unbelievable leader genuinely."

The Crusaders have a routine called “one perfect rep” which starts and ends each practice and games. It might be a scenario where the players must stand in demeanor, be balanced, have their palms and shoulders in with maintaining eye contact with Rosfeld.

“They love Luke so much they left his spot open,” Rosfeld said. “They know exactly where he is. So there is a little nook out of the rank for him.”

Moeller (6-1, 3-0 GCL South) controls its own destiny for clinching a playoff spot in Division I, Region 4, according to Joe Eitel.