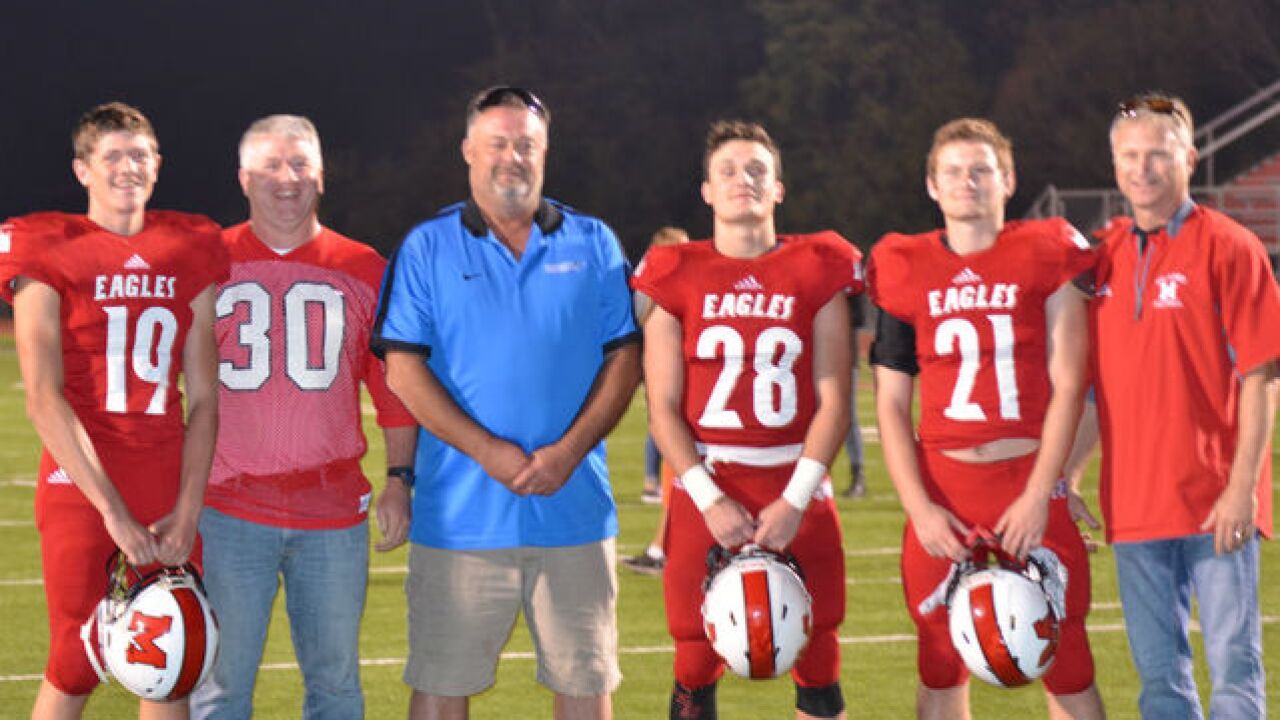 Copyright 2017 Scripps Media, Inc. All rights reserved. This material may not be published, broadcast, rewritten, or redistributed.
<p>Left to right: AJ Dickerson, Andy Dickerson, Chris Kells, Camerson Kells, Clay Ruehrwein and Russ Ruehrwein after last week's win against Withrow. Andy, Chris and Russ were on the 1986 Milford football team - the most recent squad to reach the playoffs in school history. </p>

MILFORD, Ohio -- Cameron Kells has been waiting for a Milford football season like this year all his life.

The junior running back has soaked in the enthusiasm for the football program in this Clermont County community on Friday nights.

“People start to notice and say you’re having a great year and that they’re proud of you,” Kells said. "We're playing for the community. It's awesome."

Kells is a key member of an Eagles’ team that could qualify for the postseason for the first time since 1986.

Milford and its fans have undoubtedly experienced lean times.

The Eagles were 2-8 in 2016, but now have a winning season for the first time since 2000 when it went 6-4 and had offensive lineman Zach Strief, who is now with the New Orleans Saints.

“It’s definitely a milestone this year for Milford football,” Milford Athletic Director Mark Trout said. “We are proud of the players and coaches. Our community is thrilled.”

But the Eagles aren’t satisfied. They want to etch their names into school history with a playoff appearance.

Milford (7-1, 5-0 Eastern Cincinnati Conference) plays at Anderson (8-0, 5-0 ECC) for what will determine at least a share of the ECC title.

More importantly, a Milford win Friday would provide a significant boost to its playoff chances in Division I, Region 4.

All in the family

Three men understand that drought better than most are fathers of current Milford football players.

Andy Dickerson, Russ Ruehrwein and Chris Kells were on that 1986 squad that qualified for the postseason and finished 9-2 after losing to eventual state champion Fairfield in the first round.

Milford lost the season opener to Loveland but won nine consecutive games after that. The Eagles also won the Eastern Metro League championship -- the only conference football title in school history, according to Trout.

AJ and Cameron are 16. Clay is 15. The Milford players have heard about that ’86 team from their dads. They want to change the expectations. So do the coaches.

Dickerson, Ruehrwein and Kells sit together for all the Milford football games. Sometimes they reminisce.

“It’s funny -- it’s like we are going through game film,” Andy Dickerson said. “It’s like we know what the other team is going to do. We are our weaknesses and we talk about our chances.”

The dads take pride in that ’86 squad, but they’ve had their time in the sun. They’re eager for their sons to have that postseason opportunity.

“It would be very special for the boys,” Chris Kells said.

Dickerson recently wore his Milford hat to a basketball game and was complimented by someone who has heard about the football team this season.

Russ Ruehrwein said the negativity around the program has diminished significantly. There is a different vibe at the games.

"They're so hungry," Grippa said. "They've been used to being the doormat and everyone kind of made fun of the team. That's not going to happen anymore."

There were critics after a Week 3 shutout loss to Kettering Fairmont; some said it would the same type of Milford football season.

But the fathers say this is different. This season is a foundation for the future, too.

“It’s completely changed,” said Chris Kells, who was a kicker and punter on the ’86 team. “Winning will change the perspective of the community and that’s what they’re doing.”

Milford received new uniforms this season. Grippa deflects the credit. His motto of “Win the day” is no secret. A belief in hard work is evident throughout the program.

“I think what coach Grippa has done is instill confidence in the boys,” Dickerson said. “I kind of feel like he makes them believe in themselves and that’s huge.”

AJ Dickerson, who didn’t play on the team in 2016, has enjoyed everything about the season. Winning has had that type of impact.

“Last year there were barely any people at the games because I was in the stands watching,” AJ Dickerson said. “Now, the stands are packed and people are standing on the track watching the games. It’s pretty cool. “We’re not just playing for us anymore, we’re playing for the community.”