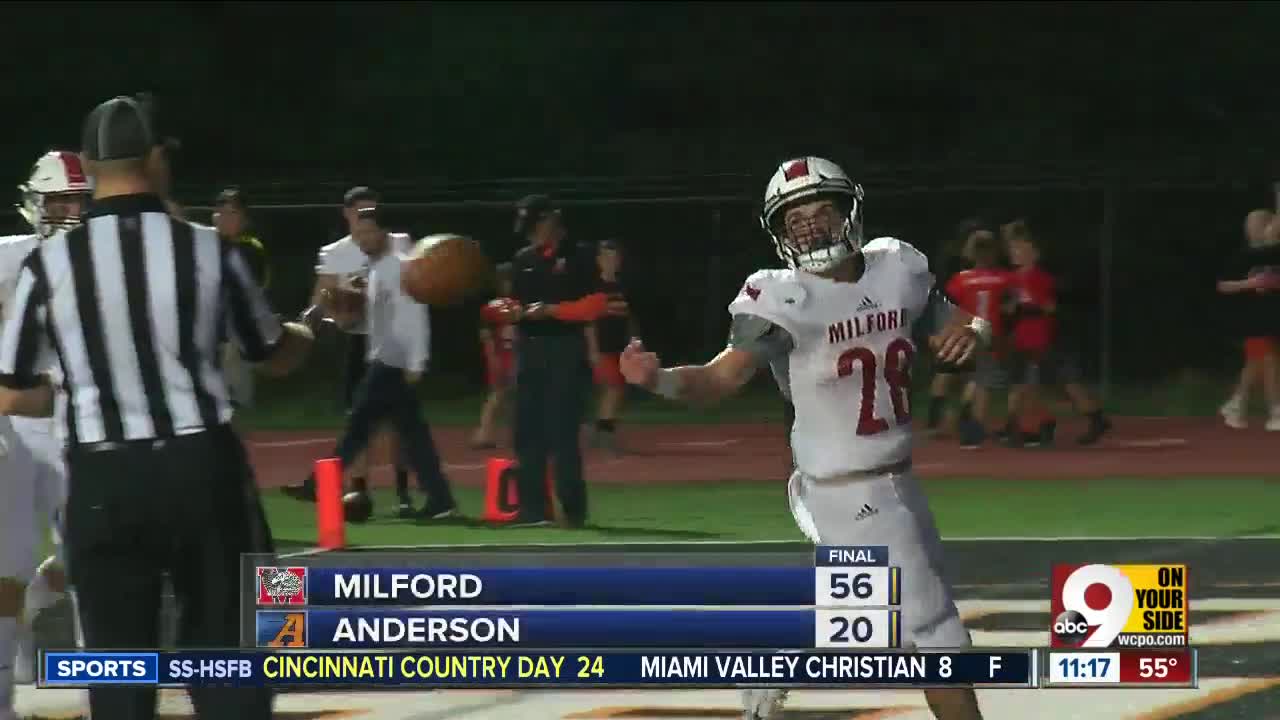 With his teammates yelling his name and clapping behind him, Cameron Kells couldn’t help but smile Friday night. The Milford senior running back scored seven touchdowns (six rushing, one receiving) to help the visiting Eagles defeat Anderson 56-20 Friday night in a key Eastern Cincinnati Conference football game. “He’s a terrific back,” Milford coach Tom Grippa said. “If he’s not the player of the week, then shame on Milford for not voting.” 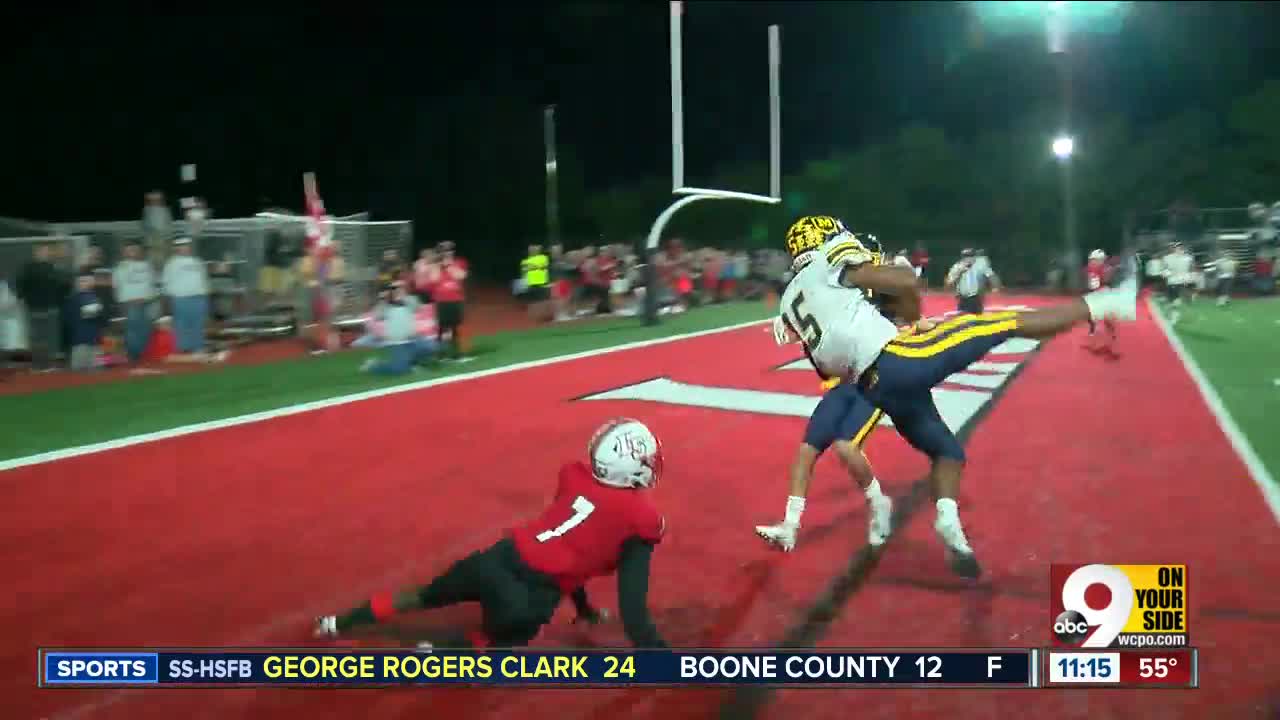 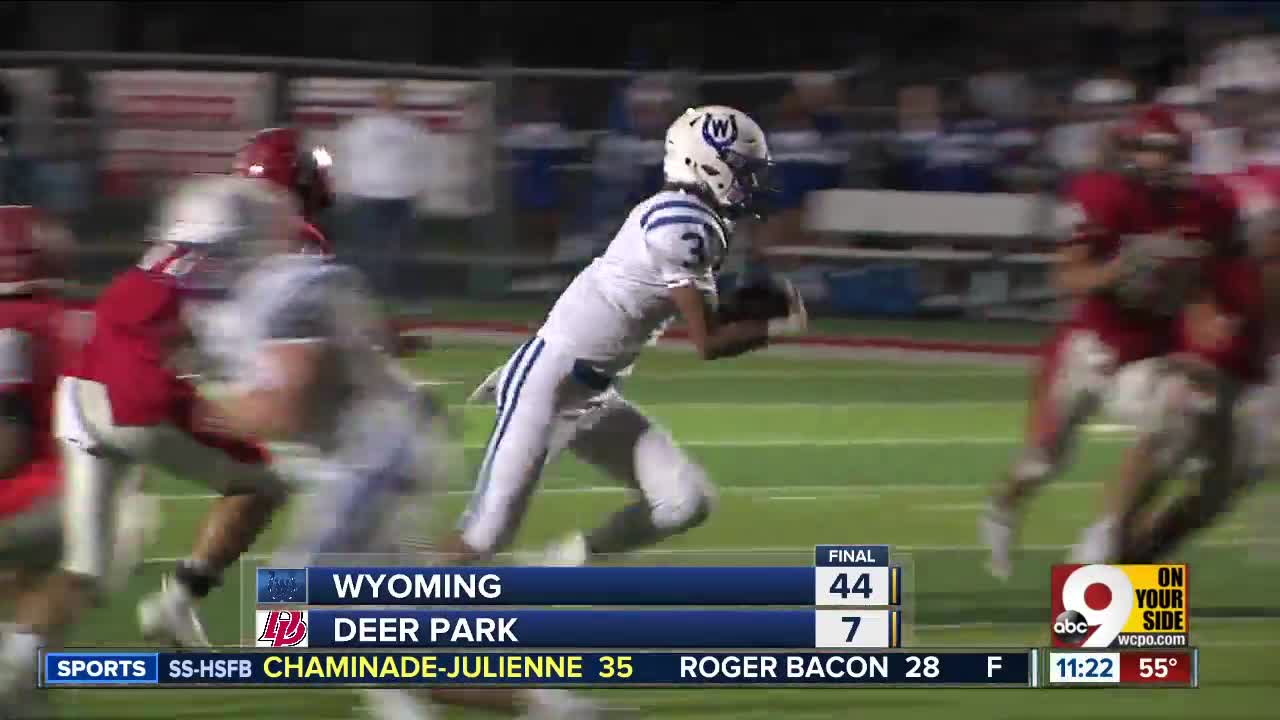 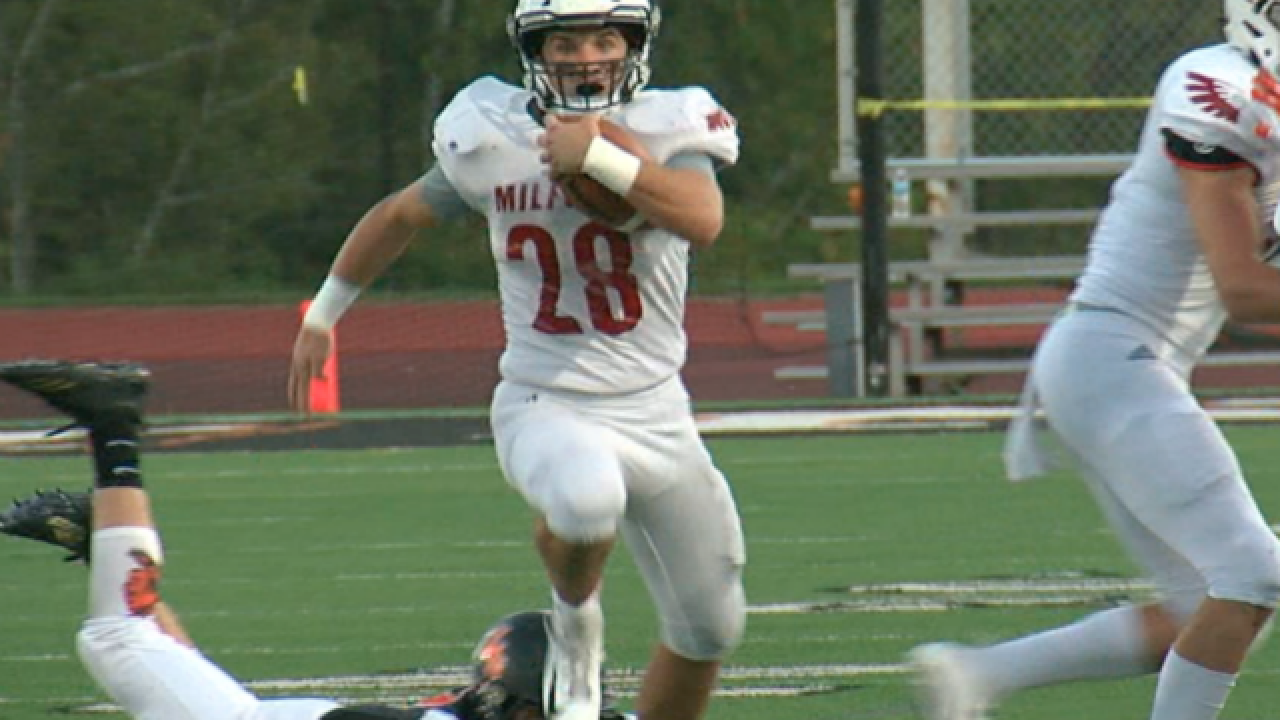 ANDERSON TOWNSHIP – With his teammates yelling his name and clapping behind him, Cameron Kells couldn’t help but smile Friday night.

“He’s a terrific back,” Milford coach Tom Grippa said. “If he’s not the player of the week, then shame on Milford for not voting.”

Kells scored four touchdowns alone in the first half as Milford led 35-7 at halftime. He added a 67-yard touchdown run to the highlight reel in the third quarter when he reversed course across the field en route to the sideline and eventually the end zone.

Kells, listed at 5 feet 9 and 160 pounds, also had two rushing touchdowns in the fourth quarter, including a 46-yarder.

His seven total touchdowns were the most by a Milford player in the past decade, according to Milford sports information director Shawn Sell. Kells may have additional school records, too.

“I really feel like my O-line was blocking really well,” said Kells, who also plays lacrosse. “We were running the ball super well. I owe it  to my O-line and my coaches. We had a great team win.”

Anything and everything went well for Milford at Charles L. Brown Stadium.

“The Milford kids rose up and played like champions,” Grippa said.

Milford (5-1, 3-0 Eastern Cincinnati Conference) entered Friday night as No. 7 in the Division I, Region 4 computer points standings, according to Joe Eitel.

"This is huge," Kells said. "We really made a statement."

The Eagles also kept pace with Kings in the Eastern Cincinnati Conference standings.

Milford started six of its drives in Anderson territory in the first half.

The teams traded interceptions on the opening drives of the first quarter.

Both teams came up empty on their next fourth-down attempts. However, Milford took advantage on the next possession, which started at the Anderson 47.

Eight plays later, Kells scored on a 1-yard touchdown run early in the second quarter to help tie the game at 7.

Milford’s defense stopped Anderson’s fourth-down attempt and the Eagles again took advantage. Kells scored on a 1-yard touchdown run at the 6:26 mark to help make it 14-7.

The Eagles recovered a fumble on the kickoff and Kells scored on a 14-yard run two plays later to help make it 21-7 at the 6:14 mark.

Kells scored on a 10-yard touchdown pass from junior quarterback Hunter Johnson about four minutes later to help make it 28-7.

Then, the Milford defense forced a fumble on fourth down. Senior Jake Ayler scored on a 1-yard touchdown run a short time later to help make it 35-7 in the closing seconds of the first half.

“This game is a really big game,” Johnson said. “They were our biggest competition last year, so coming out here and doing this, it’s really going to show the ECC that we are not something to mess with. It’s a good confidence builder. We know we can play against anybody."

Anderson (4-2, 1-2) entered Friday night at No. 9 in the Division II, Region 8 computer points standings, according to Joe Eitel.