COLUMN: We can't afford to keep waiting for a new Western Hills Viaduct 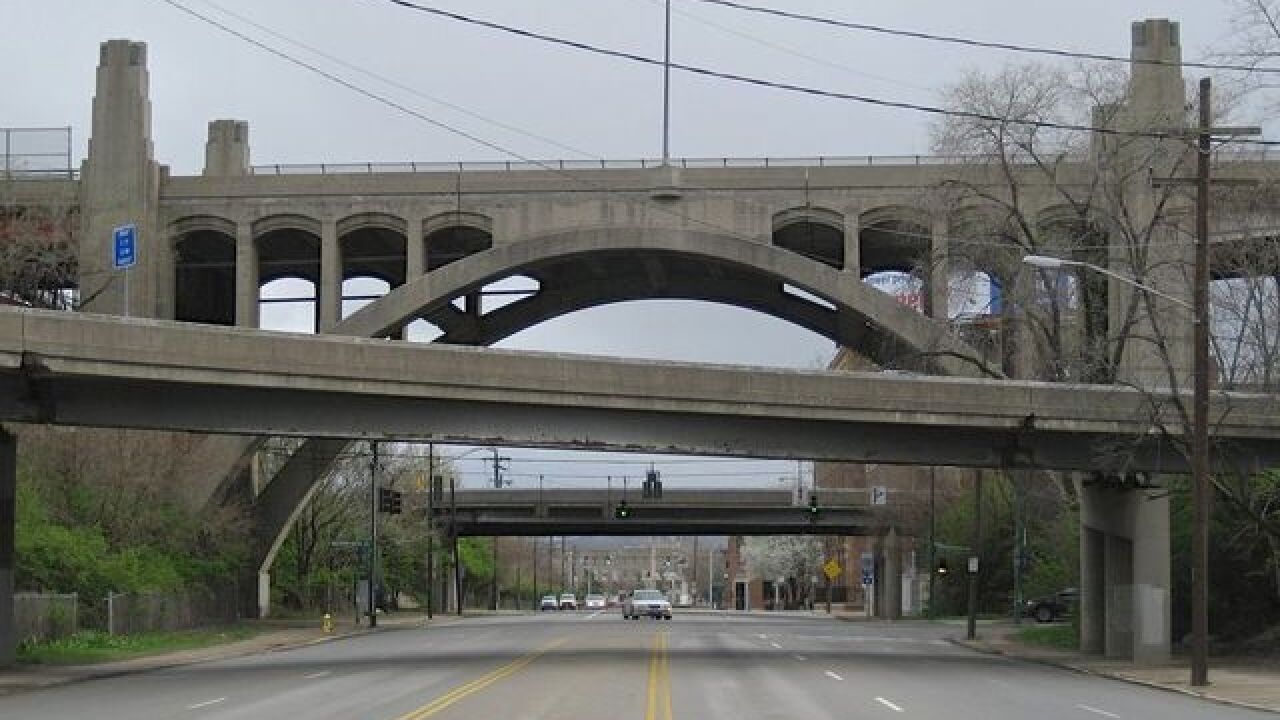 CINCINNATI -- Yes, we're all relieved that the construction on the Brent Spence is practically finished, but the truth is we're still facing an even more urgent bridge-related problem -- the Western Hills Viaduct.

We've already waited too long for a fix. The consequences are becoming deadly, and the problem spans beyond just cracked or fallen concrete.

The most recent incident involved a bicyclist who was struck and killed in what police called a hit-and-run case. Last month, the viaduct made headlines when a chunk of concrete fell and hit a driver's windshield.

Thankfully no one was hurt after the concrete fell, but it did cause an hours-long closure of the major roadway.

Federally rated in "poor" condition, the viaduct might be the structure most symbolic of Cincinnati's inability to keep up with innovative infrastructure. If it doesn't symbolize the region's roadway woes, it at least demonstrates how long we've let some things go.

The 85-year-old bridge provides the primary connection between the city's urban core and the West Side, and its last major update was decades ago, in the 1970s. It carries an estimated 55,000 vehicles each day.

As WCPO has previously reported, the bridge is considered "structurally sound" but "functionally obsolete" -- another pair of federally sanctioned terms. The bridge maintains its structural soundness due to newer steel beams installed during that last major update, which keep the concrete decking in place. The bridge is functionally obsolete, though, because it wasn't built to accommodate so many vehicles.

It's this that the Western Hills Viaduct and the Brent Spence Bridge have in common: They're not falling down, but they're over-utilized beyond their capacity for traffic.

Another thing the viaduct and the Brent Spence have in common: falling concrete, which has become a big concern for Tri-State motorists.

And we still don't know how to pay for either of them.

That's why Hamilton County Commissioner Todd Portune's announcement last week was a breath of fresh air. He unveiled a proposal to extend the current Union Terminal renovation sales tax beyond its 2018 expiration. That money -- an estimated $40 million per year -- would go toward a new viaduct. Portune's plan also involves an increase to the driver's license fee of up to $5.

These changes would bring in roughly $45 million each year, but that's just the possible local contribution, Portune told WCPO just prior to his announcement.

The plan stands a chance at passing, too, since the commission's only Republican and possible opponent of Portune's larger transportation agenda, Chris Monzel, told WCPO the Western Hills Viaduct is his top transportation priority.

That sales tax would require voter approval, and the driver's license fee hike would need county commission approval. The plan also would still require a sizeable amount of state and federal funding.

The project is so vital because it goes beyond portions concrete cracking and the city has opted to use netting as a temporary solution to catch falling chunks. The death of 44-year-old Anthony Grace -- the cyclist struck and killed on the bridge -- shows that the Western Hills Viaduct has ceased to address the transportation needs of all road users trying to travel to and from the West Side.

Police indicated that Grace rode into on-coming traffic, but imagine if there had been a dedicated, protected bike lane on the bridge. He'd almost surely still be alive.

The proposed design would add sidewalks and bike lanes to the new upper deck -- two things the existing viaduct does not accommodate.

As it stands now, the viaduct's design is "reaching the end of its design life," as the city phrases it.

But the fact remains that Portune's funding plan is far from a done deal.

"This is not a concrete plan yet," Portune told WCPO. "It's not guaranteed by any stretch of the imagination. It's not packaged yet. It's not put together yet."

Also keep in mind that -- just like any transportation project like this -- the longer we wait, the more costly the project becomes.

The time to get this paid for is yesterday.