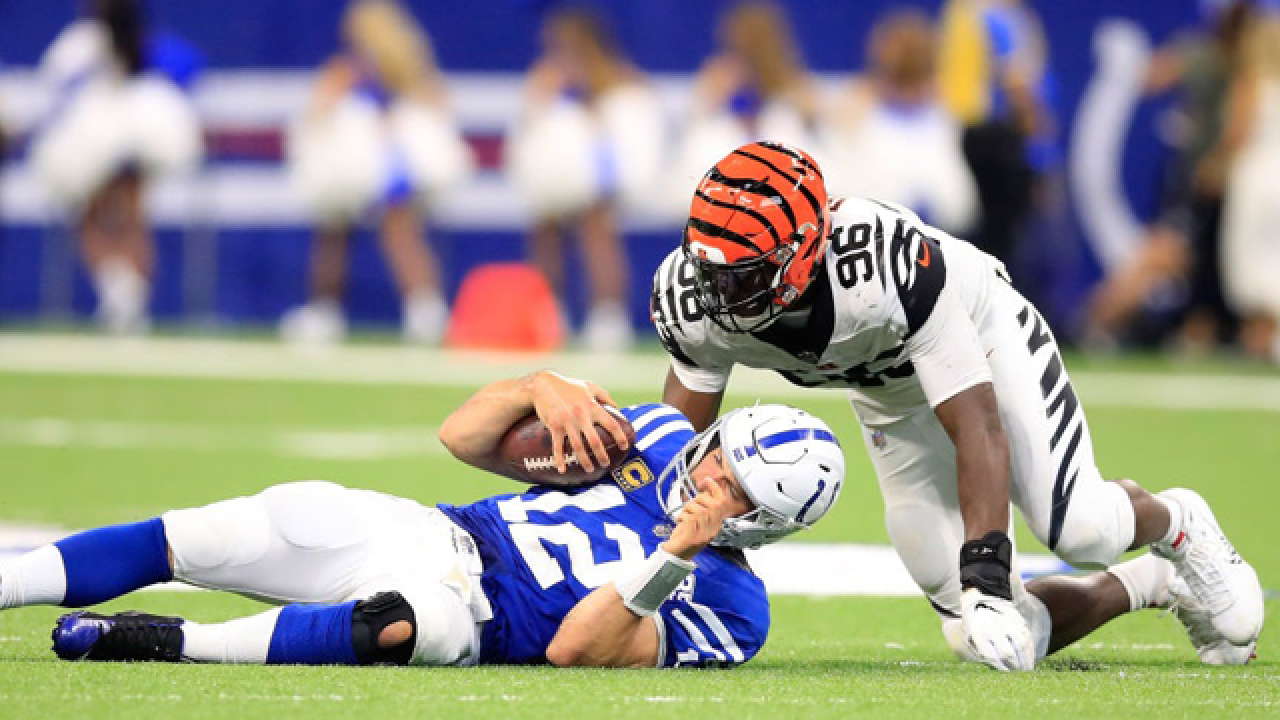 Copyright 2018 Scripps Media, Inc. All rights reserved. This material may not be published, broadcast, rewritten, or redistributed.
<p>INDIANAPOLIS, IN - SEPTEMBER 09: Andrew Luck #12 of the Indianapolis Colts is sacked by Carlos Dunlap #96 of the Cincinnati Bengals at Lucas Oil Stadium on September 9, 2018 in Indianapolis, Indiana. (Photo by Andy Lyons/Getty Images)</p>

CINCINNATI -- Carlos Dunlap spoke often in the preseason about how the Cincinnati Bengals’ defense is designed to get more sacks this year.

The ninth-year defensive end still feels that way, but sacks might be a little harder to come by for reasons out of his control.

Dunlap had one sack taken away from him Sunday in the opener at Indianapolis because of a “roughing the passer” penalty that he said he tried his best to avoid. While trying to bring down 6-foot-4, 240-pound Colts quarterback Andrew Luck for a 10-yard loss, Dunlap landed on Luck but said he put his hands on the ground to keep his weight off him and immediately rolled off.

Rule changes this year focused on trying to better protect quarterbacks by keeping a defensive player’s body weight off the passer.

IN DEPTH: Flying Pigskin: Cincinnati Bengals comeback to win 34-23 against the Colts in Indianapolis

“I was pretty angry,” Dunlap said. “I put my hands on the ground to keep my weight (off) and I rolled off immediately. That right there was a very tough play coming full speed. I wanted not to get the penalty. I knew it was Luck too, so they were going to call it tighter, but it’s a fast game. There’s no way to completely avoid some situations and I did the next best thing and tried to keep my weight off him because I think that's what they were looking for."

Dunlap isn’t sure what else he could have done aside from defying the laws of physics.

He’s not sure he will be able to do anything differently this week, either, as the Bengals host the Baltimore Ravens in their home opener Thursday at Paul Brown Stadium. Ravens 6-foot-6, 240-pound quarterback Joe Flacco was one of the top 7 least sacked players in the league last year.

“I know the rule because we saw so much of it in the preseason, so I don't want to be that guy,” Dunlap said. “The contact is going to be there. It's a contact sport.”

The “body weight rule” was enacted this season in response to a play from 2017 when Vikings linebacker Anthony Barr hauled down a scrambling Aaron Rodgers in Week 6 and snapped his collarbone with the full weight of his 255-pound frame.

Dunlap said he understands the intentions of the rule, but it already seems like some quarterbacks are getting better protection than others. Cincinnati quarterback Andy Dalton was hit a couple times in the head with no calls, according to Dunlap.

Meanwhile, the Bengals were penalized three times Sunday for “roughing the passer” or “unnecessary roughness” on plays made while trying to stop Luck, who was playing his first game since Jan. 1, 2017, because surgery to repair a torn labrum.

“I felt the same way,” Dalton said Sunday when asked about Dunlap’s comment. “To get hit in the head, pretty obviously, if he’s supposed to be looking at me and that wasn’t called. You know you just kind of have to deal with it.”

Bengals safety Shawn Williams was flagged for “unnecessary roughness” and ejected Sunday when he launched into Luck on a scramble. The new “helmet to helmet” rule flags a player for 15 yards if he lowers his head to initiate and makes contact with his helmet against an opponent.

Williams said he was just trying to stop the first down but when Luck didn’t slide, it made his job harder to do without drawing a penalty.

“I levelled my shoulder,” Williams said. “The contact with his head was incidental. There’s nothing I can do about that. I don’t know what he’s going to do as a runner. I know he’s going to try and get the first down and my job is to stop him. If you guys have any suggestions on what I can do to not get a flag and still do my job, then let me know.”

“I understand he's trying to get the first down and it's a big game and he was trying to do what he was coached to do and I was trying to do what I am coached to do, which is to stop him from getting the first down on third down,” he added. “He was aware of where the sticks were and it was obvious he wasn't giving himself up that he was going to be tackled. It was unfortunate for me that the contact was to the head with my shoulder. It was just unfortunate.”

Safety Clayton Fejedelem, who replaced Williams, said “it’s a quarterback driven league” and defensive players just have to be aware of that.

The Bengals will just have to find ways to get the quarterback within the rules to be able to play the way they want, which is fast and aggressive under new defensive coordinator Teryl Austin.

“I think what happens is at the end our technique's got to be better and if our technique's better, then maybe there's an opportunity to avoid having to be judged by New York,” Austin said, referring to the decision for the ejection going up for review by the league office.

The penalty on Williams seemed more clear-cut than the one on Dunlap, though. And, Dunlap wasn’t flagged on his next sack, which looked very similar and set the Colts back eight yards shortly before Adam Vinatieri missed a 55-yard field goal.

So what does Austin tell his defensive linemen when the calls seem so hit or miss? That’s tough, he said, because he doesn’t want them trying to change who they are. Cincinnati ranked 11th in the league for sacks last season with 41 but Dunlap and Geno Atkins are the top sacking tandem in the NFL the last three years and the Bengals have several capable pass rushers.

“That’s the one that’s a little bit harder because you don’t practice that with our quarterback,” Austin said. “What you’ve got to be able to do is when we make contact with the guy be able to take him down and move him to the side or move ourselves to the side. It’s an unnatural move when you are trying to tackle a big guy. We just have to work at it because those are the rules and we have to be able to abide by the rules or if not we are going to continue to get these (penalties). Those plays hurt your team.”