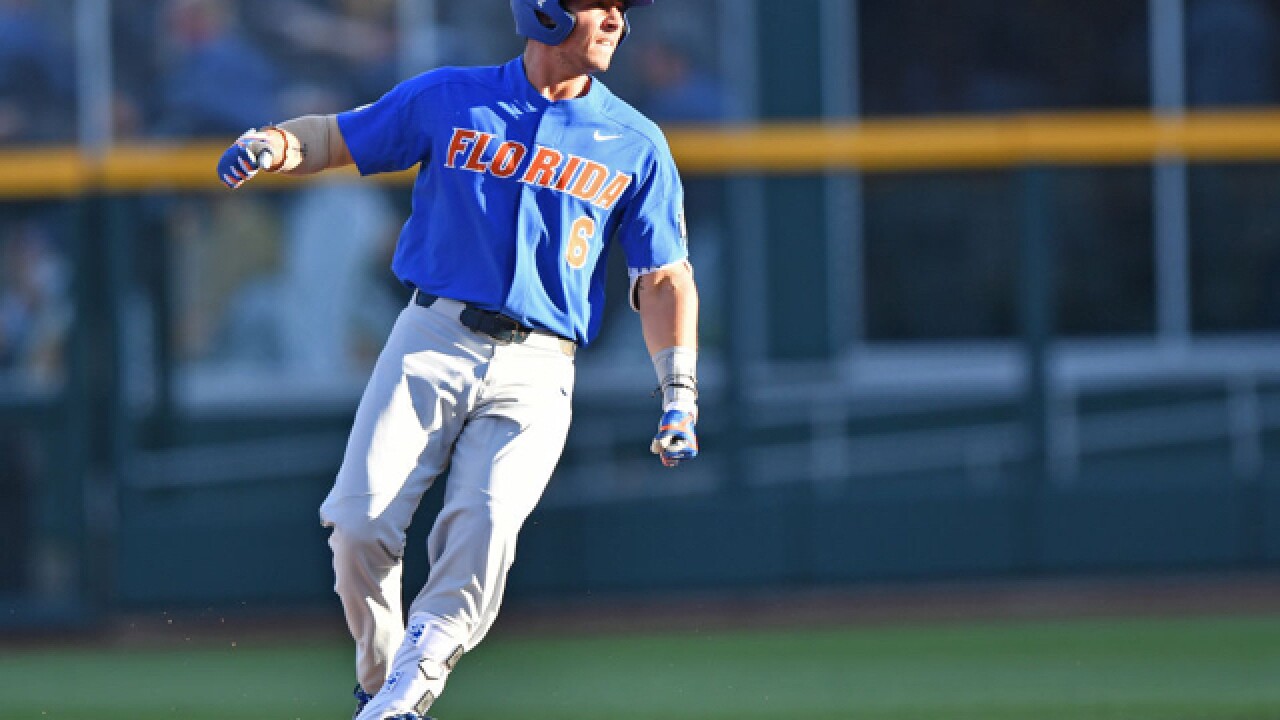 Copyright 2018 Scripps Media, Inc. All rights reserved. This material may not be published, broadcast, rewritten, or redistributed.
Peter Aiken
<p>Third baseman Jonathan India #6 of the Florida Gators reacts after hitting a two-run double against the LSU Tigers in the third inning during game one of the College World Series Championship Series on June 26, 2017, at TD Ameritrade Park in Omaha, Nebraska. (Photo by Peter Aiken/Getty Images)</p>

It looks like the Reds selected a player in the MLB draft who could be a major leaguer sooner than later. If Jonathan India is, it'd buck a troubling trend.

Developing first-round picks into major league talent hasn't gone so well for the Reds for a long time.

Only three of the Reds' first-round picks, not counting compensatory picks, have had success in the majors. Two of those three, Yonder Alonso and Yasmani Grandal, found it after leaving the Reds organization. That's a problem.

You win in any sport with first-round talent. To be sure, you'll find future major league stars in later rounds. Every major league organization passed on Albert Pujols for the first 12 rounds of the 1999 MLB draft, including the St. Louis Cardinals, but it's in the first round of the draft where you find players most ready to make an impact in MLB.

The Reds simply haven't had a lot of those.

Let's extract the first-round picks in the 2016 and 2017 drafts. Nick Senzel will arrive in Cincinnati soon. Some say he should be here now, but the front office, maybe knowing this year wasn't going to be so good, left Senzel in AAA to start the season.

The 2017 top pick, Hunter Greene, has struggled some this season in low A ball Dayton but pitched well lately. Barring catastrophic injury, Greene should be in Cincinnati by 2020.

Then again, that's the path the Reds thought Robert Stephenson was on. Stephenson was their first-round pick in 2011, and to say he has been a disappointment would be a mild opinion. Stephenson won a couple of games to start the Reds' 2017 season, but he has fallen into an abyss. He couldn't crack a pitching-starved Reds rotation this spring, and he seemed to develop an attitude problem while pitching for AAA Louisville last season.

That's where he is now, sitting at 4-4. Although he has pitched better lately, he's not exactly building a resume.

Nick Travieso was the Reds' pick in 2012. The Reds had high hopes for him. They passed on shortstop Cory Seager and pitcher Michael Wacha to take Travieso. Both of those players have gone to the All-Star Game; Travieso finally made it to AA Pensacola this season. He had shoulder surgery last summer and hasn't pitched a game of baseball since 2016.

The Reds' 2013 first-round pick, Phillip Ervin, is a real study in frustration. Stinging, perhaps over not successfully cultivating an outfielder since drafting Jay Bruce, the Reds took Ervin with the 21st overall pick. They had just traded away the future shortstop of the New York Yankees in DiDi Gregorius to get one year of Shin Soo Choo while Billy Hamilton was making his conversion from infield to outfield; they could wait on Ervin.

So far, Ervin has had a grand total of 108 at-bats in just 44 major league games. He has been up and down from AAA to the Reds 10 times. And the best season he has had in the minors was his first, in 2013. Back at Louisville, again, he appears to be a fourth or fifth outfielder, at best. Five picks after the Reds selected Ervin in the 2013 draft, the Yankees selected Aaron Judge.

When the Reds had the 19th selection in 2014, their last draft after making the postseason, they were all excited about pitcher Nick Howard. He was a pitcher and an infielder at the University of Virginia and was all ACC in both his sophomore and junior seasons. In his fourth year with the Reds organization, Howard hasn't made it out of A ball. In his defense, Howard missed the second half of his 2016 season and all of his 2017 season.

Of all the Reds' first-round picks in the last eight years, the player with the best prospect of making it to the majors sooner than maybe never is catcher Tyler Stephenson. The Reds drafted him 11th overall in 2015, and Stephenson is having his best year as a pro so far. It's only in High A baseball, at Daytona Beach, but Stephenson is hitting .281 in 191 plate appearances. He's tall and solid (6'4" and 225 pounds) and won't be 22 years old until later this summer. But the flaw in his game is power. In 919 minor league plate appearance, Stephenson has hit only 16 home runs. There is promise. But he's at least two seasons away from Great American Ball Park.

There have been other first-round picks, compensatory picks, who have done OK for the Reds. Hardly spectacular, Alex Blandino was a "comp" pick in 2014; he finally made it to the Reds this season. With limited playing time, Blandino has hit .247 so far in 2018.

Michael Lorenzen was a compensatory pick, taken after Ervin in 2013. Within two years of the draft, Lorenzen had more than 113 innings of major league pitching on his resume. He started 21 games that season with mixed results and was in line to make the starting rotation again this season, but an injury in spring training KO'd that.

He's healthy now and just had a four-inning save a week ago. The Reds now see him as a "back of the bullpen" pitcher.

Baseball remains the most difficult of all the major league sports to find, draft, cultivate and get talent to the MLB level. It requires unique skill sets. There are "five tools" in baseball, but three that must be mastered before a player is ready for the big time: hitting, fielding and running.

Pitchers have to command three pitches to even be considered a starter. At the plate, a round bat must contact a round ball and then find a place on the field for which it can fall without a fielder reaching it.

On the mound, a pitcher must contort his shoulder, elbow and body in ways it is not built to do.

In most drafts, a team is considered doing well if it gets seven to 10 of its draftees to AA baseball. If more than two from any draft actually make it to the major league level, general managers are in line for executive of the year.

Of course, there's a stark difference between a scrappy high school infielder who hits .288 and a pitcher such as Hunter Greene, whose fastball topped out over 100 mph in high school. The story isn't in the long odds of a player to make it to the top of baseball. The story is the odds of an elite player making it from college or high school baseball to the majors. There are a lot of good stories in the history of Major League Baseball about that. There just haven't been many of them lately for the Reds.

Now, on to some random thoughts cascading inside my cranium like a loose pingpong ball.

The NFL's problem with its players kneeling during the national anthem isn't going away anytime soon. The president of the United States won't let it, and this week's disinvite to the Philadelphia Eagles is another example. The White House thought it had a deal for the current Super Bowl champions to visit President Trump on Tuesday. But the turnout of players wasn't going to be robust. That's where the story gets murky.

The Eagles claim they wanted to reschedule the visit and picked a time when the president was going to be out of town. The president claims the Eagles purposely picked a date they knew he wasn't going to be around. So the president canceled the invitation and went ahead with a ceremony that celebrated the flag and America. Everybody wins, I guess, except maybe some of the fans who were going to show up. The Eagles win because they now apparently have "team unity." The president wins because he has some more "red meat" to throw to his fan base. But the NFL loses, again.

I can't say, for sure, how the NBA Finals will turn out. It ain't over till it's over. But I have a pretty good idea of what's coming in June. Enjoy LeBron James while you have him, Cleveland. Because he is gonzo. If you needed any further indication, you got it when J.R. Smith forgot what the score was. James will be 34. He won't catch Michael Jordan's six NBA titles. But he could pull off three NBA titles with three different NBA teams.

I could be wrong (often I am), but the only way I see James staying in Cleveland is if Dan Gilbert offers him a significant portion of team ownership.

Speaking of the city of Cleveland, here's another example of why Hue Jackson is in the last days of a failed mission.

Prince was just incredible. He would have celebrated his 60th birthday today.

From his 1987 album "Sign o' the Times," written by Prince. The video was filmed in Paris. The featured performer, other than Prince, is Sheena Easton. Sheila E. on drums and, of course, Prince on lead guitar. Easton's role in this song is a testament to music made "on the fly." She and Prince had worked together before and he asked her to work on this song for this album. Her job was background vocals. But when Prince heard her sing in rehearsal, he decided this should be more of a duet rather than a background part for Easton.

Prince Rogers Nelson, born 60 years ago today in Minneapolis. He died not too far from there in 2017 at age 57.