Under a microscope in the minors, Reds big-time prospect Hunter Greene is grounded and focused

'You have to stay true to who you are' 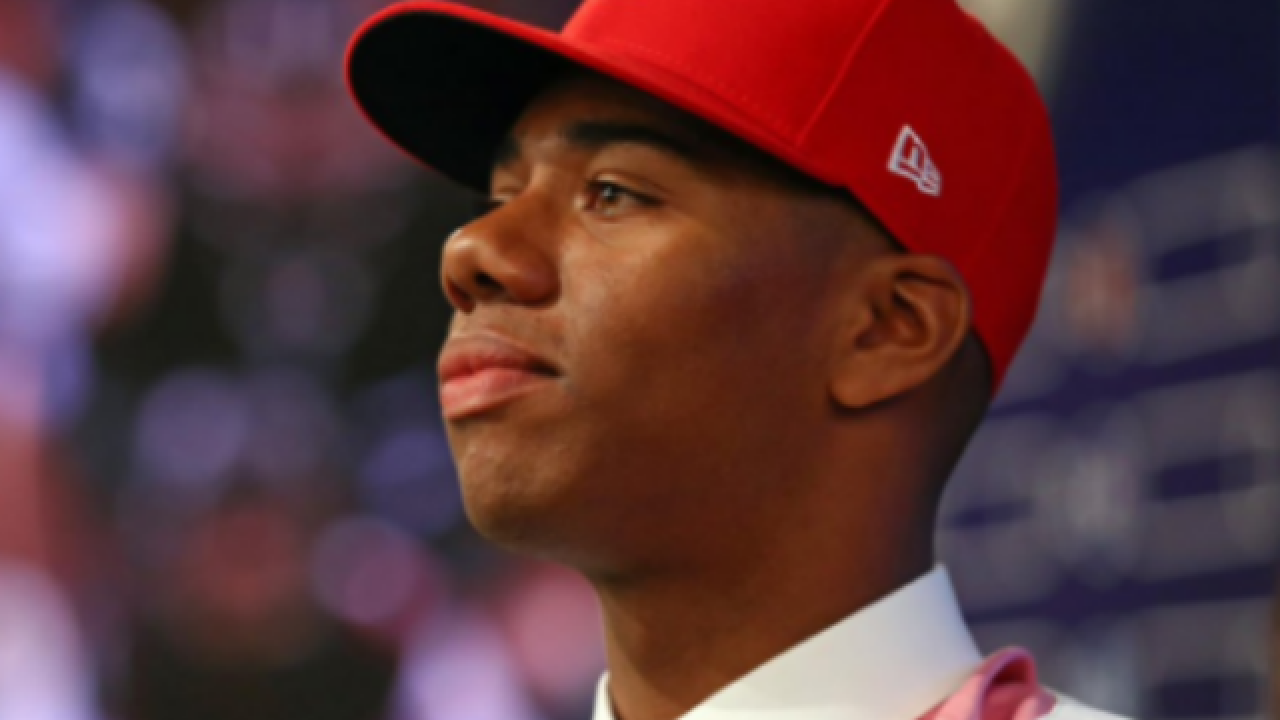 DAYTON, Ohio -- Hunter Greene sat in the home dugout at Fifth Third Field, a Dayton Dragons hoodie draped over his head still beading with sweat after a lengthy pitchers' meeting in the steamy outfield, wondering where the past year had gone.

"Feels like yesterday I was in the draft room getting my name called," said Greene, who was drafted No. 2 overall by the Cincinnati Reds last June. "It's gone by fast. I've gotten out of the mindset that I'm a first-rounder. All that is in the past. It's time to get to work."

The night before, Greene had enjoyed his best outing for Dayton: one earned run, five innings, 79 pitches. Another step forward. Another day's work.

Greene, 18, pocketed a record signing bonus of $7.2 million from the Reds last July and, ever since, each start he has made and every pitch he has thrown has been under a microscope.

The Southern California native who once graced the cover of Sports Illustrated, which dubbed him 'The Star Baseball Needs,' isn't one to rest on his laurels. His father, Russell, a prominent Los Angeles attorney, and his mother, Senta, a long-time educator, would not allow that. This kid gets it.

"You have to stay true to who you are," Greene says.

Greene carries that philosophy with him every day. Despite inking that hefty bonus with the Reds, Greene doesn't live a life of extravagance, which is more difficult anyway in places like Billings, Montana, and Dayton, Ohio, his first two minor-league stops.

"From day one when he got to Billings last year, he comes in and is doing his work, just like every other guy," Dragons pitching coach Seth Etherton said. "The guys accepted him. He takes it and he gives it. He doesn't take things personally. That's the mature nature that he has."

Not even his offseason home in the heart of Las Vegas with a neighbor named Pete Rose makes Greene a candidate for the next reality TV series. Sure, Greene drives a convertible Mercedes from point A to point B, but he remains focused on the tasks at hand.

Stardom and freakish athletic ability aren't the only things that set the 6-foot-3, 195-pound Greene apart from most 18-year-olds. He plays the violin and recently learned to speak Korean. He doesn't allow himself to be consumed by "kid" things.

He avoids social media for the most part, except for the occasional Instagram story or well-orchestrated Twitter post, despite having more than 48,000 followers on Instagram and around 21,000 on Twitter. You can imagine what comes across Greene's timeline on a daily basis, especially after games. Whether he pitches well or not, Greene will not look at Twitter after a game.

"You can't tell people not to say what they want to say. It's freedom of speech and all that," Greene said. "All the social media problems and arguments are always on Twitter. I try to stay away from going on there. Our generation, we love to go on social media. It's hard to put that away. I wanted to delete my Twitter a couple of times, but I just learned not to look at it, focus on myself and handle my business on the field."

At least for this season, home for Greene is Dayton, more than 2,000 miles from friends and family and the lifestyle he's accustomed to.

"I get homesick," Greene said, "especially when you have social media and my sister's posting pictures of being on the beach and eating nice dinners in Malibu. I'm here and grinding every day, but I embrace it."

Greene said his 12-year-old sister, Libriti, is doing well after being diagnosed with leukemia at age 5. He also has a 7-year-old brother named Ethan. He expects the entire family to visit him in Dayton toward the end of the season.

"My mom and dad will put all their work aside to come see me, which is awesome," Greene said.

These days, Greene lives with a host family in Dayton along with fellow Dragons pitchers Tyler Mondile, Ryan Nutof, and Packy Naughton. Whether it's a win or a loss, the trio of right-handers and one lefty (Naughton) wind down after games with a couple of games of ping-pong or pool. Greene recently bought an Xbox for his place in Vegas but says, unlike a lot of his teammates, he's no gamer.

"Most of the guys love video games," he said. "Mondile loves to play Fortnite."

Instead, Greene will head to the theater room, where he watches episodes of the popular teen mystery drama "13 Reasons Why" on Netflix. "A lot of teenagers are watching it right now," he said, "especially a lot of girls."

Speaking of which, Greene finds little time for dating, and does his best to deflect a lot of the "attention" he receives from women through social media. Greene says he prefers to keep his focus on baseball and, besides, there's risk involved for someone of his stature entering into any relationship.

"The dating thing's hard, man," Greene said. "You've got to see what people's motives really are, if they want you for the money or the fame, or if they really want you for who you are. I have to deal with that for the rest of my life unfortunately. I can't really dodge it. I dated one girl in high school. It went really well. We still talk, we're still friends. She was awesome."

Greene says he enjoys bonding with teammates off the field, even though there are limitations to what sort of group activities an 18-year-old can engage in. The way he carries himself in and away from the ballpark, it's easy to forget how young Greene is.

"He's different than most younger guys in that he knows how to shake things off," Etherton said. "It's the first time he's ever lived away from home. Homesickness comes into things. He's a professional now. He's expected to be a professional, live away from home and take care of himself. Most 18-year-olds have never had to do that before."

Greene shook off a three-game stretch toward the end of April when he gave up 13 earned runs and walked nine over just 4 1/3 innings. In order to manage his innings, the Dragons skipped two of his starts.

He has worked closely with Etherton and Reds pitching coordinator Tony Fossas on fastball command and in the past month has cut his earned-run average in half, to 7.18.

"He has a bull's-eye on his back," said Etherton, who pitched for four seasons in the major leagues including 2003 with the Reds. "He's played in the best and biggest market in Southern California. He's played with USA Baseball. He's an All-American, a first-round draft pick. Now, he's on a level playing field. Now it's time to learn."

The Reds have said they won't rush that process. Best estimates have Greene arriving at Great American Ball Park no sooner than 2020.

"It's important that he develops at his own pace," said Reds president of baseball operations Dick Williams. "We need to give Hunter some time. Hunter deserves all the positive media attention that he's gotten. He's really a wonderful person. He's a kid we can really build around."

Greene said he still has a lot of work to do, but also believes in his potential. He is focused on listening to his older teammates and coaches, including members of the Reds organization he's fortunate enough to spend time with.

"I take that all in and learn from it," Greene said. "The only thing guaranteed in baseball is failure. It sucks when you go out there and you don't perform like you want to. You can't go out there and sulk. I'm playing with grown men. Most of these guys are 21, or 22. They aren't going to feel sorry for me."

Greene prefers to do most of his interviews the day after he pitches. As clouds rolled in over Fifth Third Field last Wednesday ahead of a line of thunderstorms, Greene ducked into a corner of the dugout to do a phone interview with a Los Angeles-area newspaper.

"That was long," he said afterward.

All in a day's work.